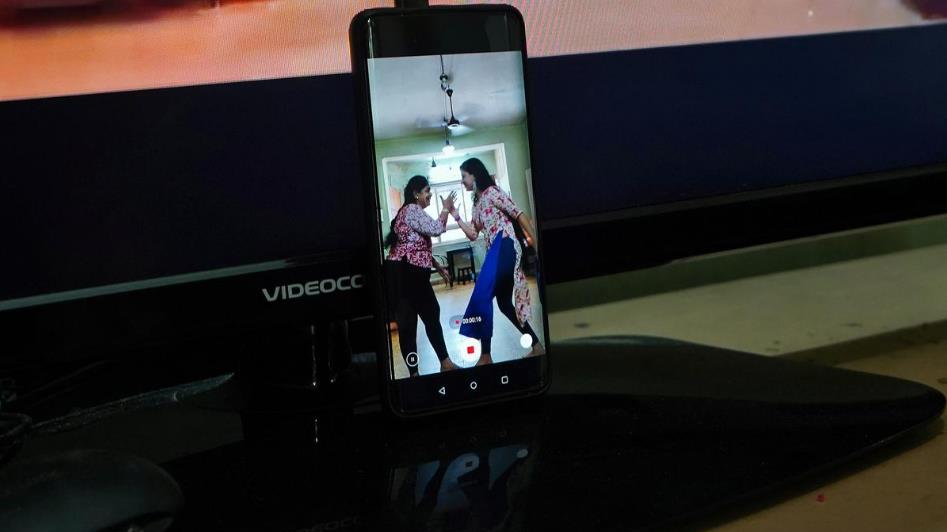 Geetha Sridhar, 54, who used to post over a dozen videos a day on video-sharing app TikTok, and her daughter Sarada Sridhar are seen in a mobile phone's screen as they make a video they said will upload on an Indian app, after India banned dozens of Chinese apps including TikTok following a border face-off between the two nations, at their home in Mumbai, India, July 1, 2020. /Reuters

Geetha Sridhar never used to enter her kitchen in Mumbai without her smartphone. The 54-year-old homemaker used to post dozens of short videos daily on the Chinese video app TikTok, mostly of herself cooking traditional recipes.

With one million TikTok followers, she earned an average 50,000 rupees (662 U.S. dollars) a month from companies who paid her to use their products.

For thousands of Indian content creators like Sridhar, TikTok was a window into fame and fortune. But on Tuesday, the app, owned by China's ByteDance, went blank on phones across India after the government banned it along with 58 other Chinese-origin apps which it considered a "threat to national sovereignty", a raucous move against China in the online space since a face-off between the two countries' forces at the border region last month.

China said that India's move to ban 59 Chinese-origin mobile apps could be a breach of World Trade Organization (WTO) rules and urged New Delhi to create an open and fair business environment.

"TikTok made me strong and confident. I started wearing western clothes, dancing on the streets ... I am disappointed," Sridhar said.

TikTok was a sensation in India. With more than 600 million downloads, India accounted for 30 percent of its two billion downloads worldwide. ByteDance planned to invest one billion U.S. dollars in India, its top growth market where it employs 2,000 people.

Unlike Instagram, Facebook and Twitter, TikTok found resonance in India's hinterland as well as its cities, thanks to its less elaborate user interface, background music options and various special effects.

Users – who ranged from top Bollywood stars to people in remote villages who became mini-celebrities – posted a wide variety of content, though jokes, dance clips and videos related to India's thriving movie industry dominated the platform.

Vishal Pandey, 22, had nearly 17 million followers on TikTok and used the platform to regularly post videos – everything from dancing to short humorous acting sketches. His popularity on the platform had helped him secure acting offers for some movies, he said.

"TikTok opened so many doors for me. Instead of having to line-up outside auditions, I got calls from casting agents saying 'Can you please work in our web series'," Pandey said.

"Right now, there is absolutely no app that can compare to TikTok. None," he added.

After India imposed the ban but just before the app went blank, many TikTok users posted videos expressing their displeasure. Some told their followers to track their future posts on YouTube or Instagram.

Indian video-creation apps like Roposo, described on Google's app store as "India's own video app", and another named Chingari are likely to see a popularity surge after the TikTok ban.

But some users say they will continue to miss TikTok.

Indian student Siri Challa, 23, had only recently started posting videos of her mother and herself dancing to catchy songs on TikTok. In less than three months, she garnered one million followers and a promotion deal with a beauty brand.

"I'm going to miss it, but I guess it is time to move on," Challa said.