WORLD India's winter of discontent: Farmers rise up against Modi

India's winter of discontent: Farmers rise up against Modi

NEW DELHI (AP) — A chilly breeze whirls through New Delhi in the mornings and the sun is partly obscured by toxic haze, a marker of another winter in the Indian capital. But along the city's borders, this year is visibly and viscerally different. 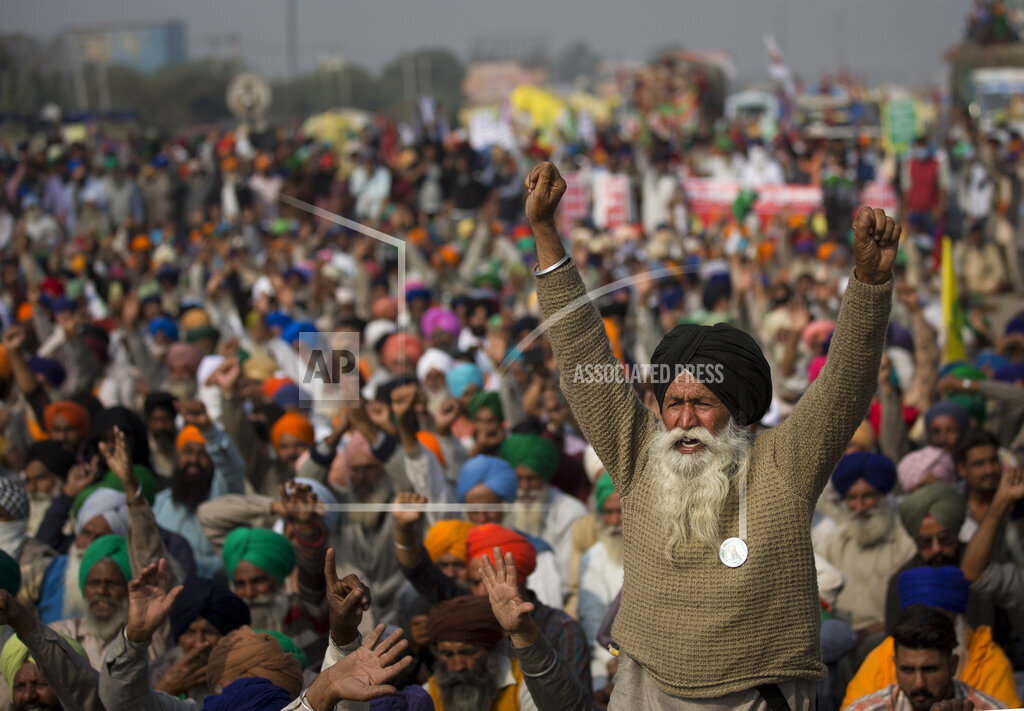 An elderly farmer shouts slogans as others listen to a speaker as they block a major highway during a protest to abolish new farming laws they say will result in exploitation by corporations, eventually rendering them landless, at the Delhi-Haryana state border, India, Tuesday, Dec. 1, 2020. The busy, nonstop, arterial highways that connect most northern Indian towns to this city of 29 million people, now beat to the rhythm of never-heard-before cries of "Inquilab Zindabad" ("Long live the revolution"). Tens and thousands of farmers, with colorful distinctive turbans and long, flowing beards, have descended upon its borders where they commandeer wide swathes of roads. (Photo: AP)

The perpetually busy arterial highways that connect most northern Indian towns to this city of 29 million people now pulse to the cries of “Inquilab Zindabad” — “Long live the revolution.” Tens and thousands of farmers with distinctive, colorful turbans and long, flowing beards have descended upon the city's borders, choking highways in giant demonstrations against new farming laws that they say will open them to corporate exploitation.

For more than a week, they’ve marched toward the capital on their tractors and trucks like an army, pushing aside concrete police barricades while braving tear gas, batons and water cannons. Now, on the outskirts of New Delhi, they are hunkered down with food and fuel supplies that can last weeks and threatening to besiege the capital if Prime Minister Narendra Modi’s government doesn't meet their demands to abolish the laws.

“Modi wants to sell our lands to corporates,” said one of them, Kaljeet Singh, 31, who traveled from Ludhiana city in Punjab, some 310 kilometers (190 miles) north of New Delhi. “He can’t decide for millions of those who for generations have given their blood and sweat to the land they regard as more precious than their lives.”

At night, the farmers sleep in trailers and under trucks, curling themselves in blankets to brave the winter chill. During the day, they sit huddled in groups in their vehicles, surrounded by mounds of rice, lentils and vegetables that are prepared into meals at hundreds of makeshift soup kitchens, in enormous pots stirred with wooden spoons the size of canoe paddles.

Anmol Singh, 33, who supports his family of six by farming, said the new laws were part of a larger plan to hand over the farmers' land to big corporations and make them landless.

“Modi wants the poor farmer to die of hunger so that he can fill the stomachs of his rich friends,” he said. “We are here to fight his brutal decrees peacefully.”

He paused, then reconsidered: “Actually, let him and his ministers take us on. We will give them a bloody nose.”

Many of the protesting farmers hail from northern Punjab and Haryana, two of the largest agricultural states in India. An overwhelming majority of them are Sikhs. They fear the laws passed in September will lead the government to stop buying grain at minimum guaranteed prices and result in exploitation by corporations who will push down prices. Many activists and farming experts support their demand for a minimum guaranteed price for their crops.

The new rules will also eliminate agents who act as middlemen between the farmers and the government-regulated wholesale markets. Farmers say agents are a vital cog of the farm economy and their main line of credit, providing quick funds for fuel, fertilizers and even loans in case of family emergencies.

The laws have compounded existing resentment from farmers, who often complain of being ignored by the government in their push for better crop prices, additional loan waivers and irrigation systems to guarantee water during dry spells.

The government has argued the laws bring about necessary reform that will allow farmers to market their produce and boost production through private investment. But farmers say they were never consulted.

With nearly 60% of the Indian population depending on agriculture for their livelihoods, the growing farmer rebellion has rattled Modi’s administration and allies. His leaders have scrambled to contain the protests, which are fast resembling last year’s scenes when a contentious new citizenship law that discriminated against Muslims led to demonstrations that culminated in violence.

Those demonstrations were much bigger in scale, but the farmers' rumblings are growing fast and gaining widespread support of ordinary citizens who have started joining them in large numbers.

Modi and his allies have tried to allay farmers’ fears about the new laws while dismissing their concerns. Some of his party leaders have called the farmers “misguided” and “anti-national,” a label often given to those who criticize Modi or his policies.

The government is holding talks with the farmers to persuade them to end their protests, but they have dug in their heels.

Farmer Kulwant Singh, 72, said that when he left his home in Haryana for the protests, he gave his wife a garland of flowers for two possible scenarios.

“Either I return victorious and she places it around my neck in celebration, or I die here revolting and the same garland is put on my body when it reaches home,” Singh said.

Such passions run deep among the protesters who have found social, economic and generational barriers tumbling during the demonstrations.

Singh isn't the only one from his family who traveled to New Delhi for what he called “Qilah Fatehi," an Urdu term that translates to “laying a siege.” His son and grandson also accompanied him.

“It's a fight for my generation too,” said Amrinder Singh, 16.

As demonstrations grow, the protesters have also started to drive a political message home.

Not satisfied with Modi's federal policies, many of which have attracted widescale resentment from his critics and minorities, protesting farmers say it's time he stops what they call his “dictatorial behavior.”

“India is in a recession. There are hardly any jobs and our country's secular fabric is in tatters,” said Gurpreet Singh, 26, a biotechnology student who comes from a farming family. “At a time when India needs a healing touch, Modi is coming up with divisive, controversial laws. This is unacceptable and defies our constitutional values.”

Modi's second term in power since May 2019 has been marked by several convulsions. The economy has tanked, social strife widened, protests have erupted against discriminatory laws and his government has been questioned over its response to the pandemic.

The farmer protests present a new challenge for the government.

The protesters' desire to stand up to Modi and his policies extends to a sexagenarian farmer couple who drove 250 kilometers (155 miles) from Chandigarh city in a hatchback Sunday to participate in the demonstrations.

Dharam Singh Sandhu, 67, and Vimaljeet Kaur, 66, are spending nights in their car parked near the protest site. In the morning, they share breakfast at a makeshift soup kitchen. The latter part of the day is spent taking part in the demonstrations.

“Our land is our mother. If we can’t protect it then we have no right to live," Sandhu said about the protests.

His wife spoke passionately of a larger purpose as she made her way to the protest site through a stream of vehicles honking incessantly to get past congested traffic.

“Our country is like a bunch of flowers, but Modi wants it to be of the same color. He has no right to do that. I am here to protest against that mindset," Kaur said.

As Kaur walked hand in hand with her husband, a great cry emerged from one of the vehicles: “Inquilab Zindabad.”

The crowd turned and followed their gaze toward a young man with a black beard who held up his fist through the car's window.

The protesters, including Kaur, roared back: “Inquilab Zindabad!"