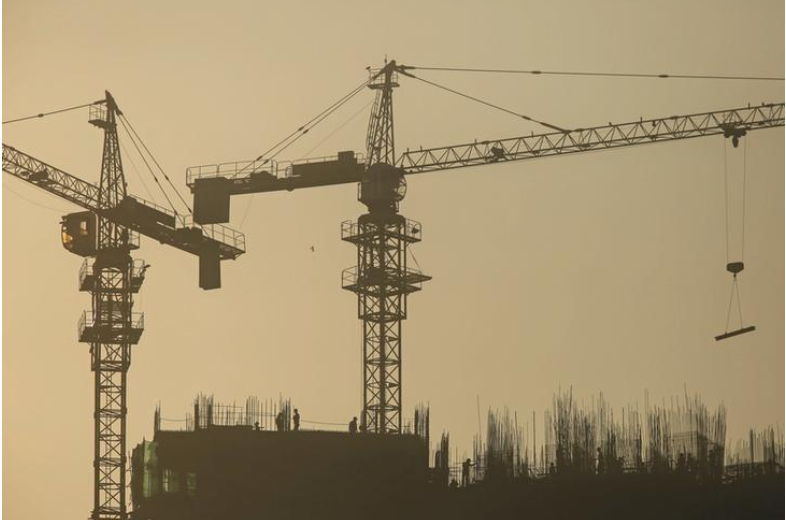 Labourers works at the construction site of a residential building in Mumbai, India, February 4, 2016. REUTERS/Shailesh Andrade

India’s economic growth pace likely picked up in the three months ending in September, halting a five-quarter slide as businesses started to overcome teething troubles after the bumpy launch of a national sales tax.

The economy also has moved past the disruptions encountered after India’s shock ban on high-value banknotes in November 2016, economists say.

For July-September, the median in a Reuters poll of economists was for annual growth INGDPQ=ECI of 6.4 percent. Forecasts ranged from 5.9 percent to 6.8 percent.

If there was 6.4 percent growth, that would mark a sound acceleration from 5.7 percent in April-June, but still lag China’s 6.8 percent and Philippines’ 6.9 percent for the three months through September.

The data could help Prime Minister Narendra Modi, who is facing criticism over the hasty July launch of Goods and Services Tax (GST) - aimed at transforming India’s 29 states into a single customs union - but hitting millions of small businesses due to complex rules and technical glitches.

Big companies have largely adjusted to the changes while benefiting from reduced logistics costs.

Prominent Indian firms had their best profit growth in last six quarters in July-September, according to Thomson Reuters data.

The results are an indication that firms are starting to recover after being hit earlier this year by uncertainty tied to the rollout of a new tax and a shock ban on cash in late 2016.

“We expect a gradual recovery led by the industrial sector as businesses adjust to the GST regime,” said Aditi Nayar, an economist at ICRA, the Indian arm of Moody’s Investors Service.

It expects the economy to grow 6.7 percent in the fiscal year ending March 31, and 7.5 percent the following year.

Many private-sector economists expect faster growth in the current quarter and January-March as consumers and businesses step up spending and global recovery gains traction.

Urjit Patel, governor of the Reserve Bank of India (RBI), said last month that signs of an upturn were visible and growth was likely to top 7 percent in those quarters.

Modi's administration hopes the ratings upgrade can attract more foreign investors, who pumped $15 billion into Indian equities in July-September, up 44 percent from the previous quarter. The main NSE share index .NSEI is up 27 percent in 2017.

Still, the world’s seventh largest economy, which grew at more than 9 percent a year from 2005 through 2008 is far from firing on all cylinders. Domestic demand and private investments remain weak.

After front-loading state spending in the fiscal year’s first half, Finance Minister Arun Jaitley has limited room to spend amid slowing revenue growth.

Finance Ministry officials hope the central bank will cut interest rates soon, but analysts say that rising global oil prices, which could pinch consumers through higher inflation, may instead force the RBI to hike in the second half of 2018, denting growth momentum.