India has sent technical equipment and a team of specialists to Mauritius to help local authorities deal with an environmental crisis after an oil spill from a Japanese ship, a government official said on Sunday. 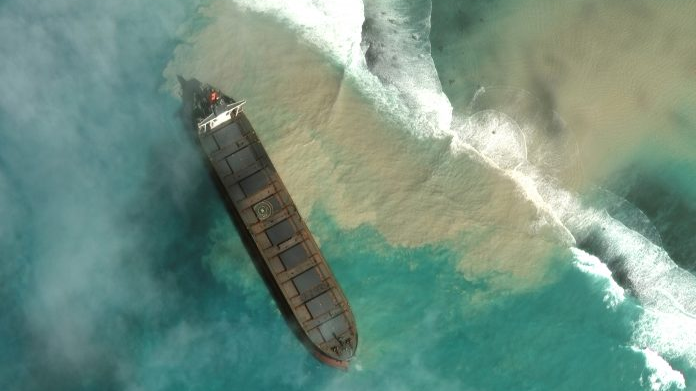 India has sent technical equipment and a team of specialists to Mauritius to help local authorities deal with an environmental crisis after an oil spill from a Japanese ship, a government official said on Sunday. (Photo: Social Media)

A Japanese bulk carrier struck a coral reef off the Indian Ocean island nation on July 25, spilling about 1,000 tonnes of fuel oil and triggering a state of“environmental emergency".

The carrier split on Saturday, and the oil spill spread over a vast area of endangered corals, fish and other marine life in what some scientists called the country's worst ecological disaster.

On Sunday, Mauritian authorities said the stern section of the vessel had been completely detached, with the remainder of the ship slowly being towed by two tugs towards high seas.

The country's National Crisis Committee said that rough weather conditions had made the removal of the remaining oil on the ship risky.

"There is still approximately 30 cubic meter of mixed type of oil in the engine room," it said in the statement. "In view of the rough sea condition, the salvage company...has informed that it cannot carry on with the pumping of the remaining oil."

Authorities said that they have cordoned-off Blue Bay Marine Park, with three layers of booms.

Scientists say the full impact of the spill is still unfolding, but the damage could affect Mauritius and its tourism-dependent economy for decades. Removing the ship is likely to take months.

Following a government request for assistance, India dispatched over 30 tonnes of technical equipment and material by aircraft to supplement the country's salvage operations, the foreign affairs ministry said in a statement said.

Mauritius said that some of these materials are being deployed at Riviere La Chaux, Riviere des Creoles, Riviere Ferney and Grand River South East.

A 10-member team of Indian coast guard personnel trained in oil spill containment measures has also been deployed to Mauritius to provide technical and operational assistance, it said.