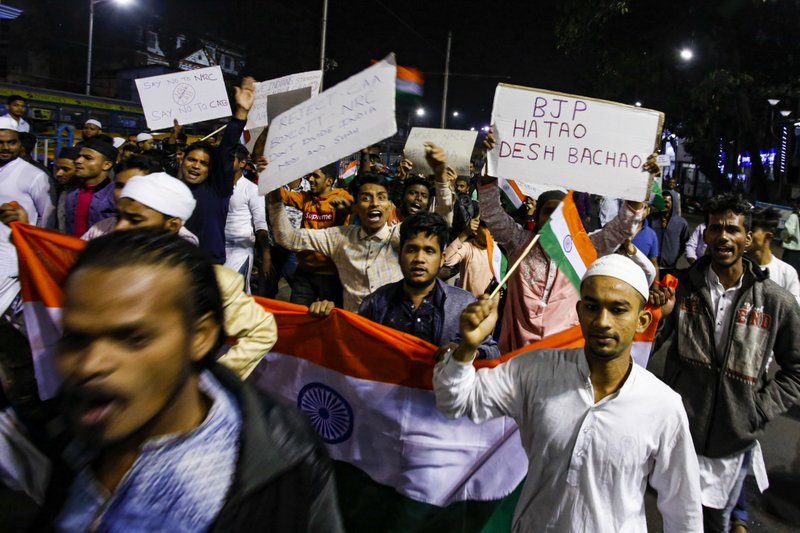 Indians shout slogans during a protest against the Citizenship Amendment Act after Friday prayers outside a mosque in Kolkata, India, Friday, Dec. 20, 2019. (Photo: AP)

Indian authorities have stepped up phone and mobile internet shutdowns in some parts of the country in an effort to thwart a groundswell of protests over a new citizenship law that excludes Muslims.

Student-led protests that have galvanized a large section of the Indian public have been met with communications blocks in areas of New Delhi, in the eastern state of West Bengal, the northern city of Aligarh and the entire state of Assam in the days since the contentious law was passed in Parliament.

In Aligarh, where police beat students and fired tear gas shells inside a university last week, internet services on Saturday were suspended for the sixth straight day. The services were also barred in the capital of northern Uttar Pradesh, where nine people have been killed statewide in protests since Friday.

Internet services were restored in the northeastern border state of Assam, the center of a decades-old movement against migrants from Bangladesh and where the protests began last week.

Internet shutdowns are a favored tactic for the government of Prime Minister Narendra Modi. Authorities have interrupted internet services at least 102 times so far this year, according to a public online tracker maintained by the New Delhi-based Software Freedom Law Centre.

In 2018, the #KeepItOn coalition, which works with the support of 191 organizations globally, and the nonprofit group Access Now reported that of the 196 internet shutdowns reported from 25 countries, India was responsible for the majority, with 134 incidents — almost 67% of the world’s documented shutdowns.

Since Modi’s Hindu nationalist-led government first came into power in 2014, the internet has been suspended more than 360 times.

Authoritarian regimes across the world have used similar tactics. In Egypt, for example, the government has blocked more than 500 websites in recent years to try to stifle dissent.

As Iran faced nationwide protests over government-set gasoline prices rising in November, the government shut down internet access to the outside world amid violence and a security-force crackdown that reportedly killed over 300 people. That’s as Iran’s Shiite theocracy already has created a so-called “halal net,” a controlled set of local websites and services.

Iran already bans Facebook, Twitter, YouTube and other sites after protests surrounding its disputed 2009 presidential election, but tech-savvy Iranians long have circumvented those restrictions with virtual private networks and other means. In November, however, the shutdown blocked even those methods.

In Pakistan, India’s archrival, the military and government have routinely restricted cellphone service and had Twitter and Facebook shutter accounts that they said contravene the country’s laws.

As part of its restrictions on millions of Uighur Muslims and other ethnic minorities, China, notorious for operating the world’s most extensive system of censorship, has snapped internet access in the western region of Xinjiang to block access to material deemed “subversive or obscene.”

The ruling Communist Party, which is trying to promote the notion of “internet sovereignty,” or the right of governments to restrict what their people see and do online, cited India’s shutdown as support for Chinese controls.

India’s action “proved that the necessary regulation of the internet is a reasonable choice” and an extension of “internet sovereignty,” the party newspaper People’s Daily said on Dec. 17.

Critics have pointed to the rise of internet shutdowns in India as a mechanism of censorship and repression in response to growing opposition to the government.

“These shutdowns not only violate the fundamental rights of the people but are a well-crafted response by the state to curb forms of speech,” said Apar Gupta, executive director of India Freedom Foundation, a digital rights advocacy group.

Vasudha Gupta, a spokesman for India’s Ministry of Home Affairs, which handles internal security matters, did not immediately respond to a message seeking comment Saturday.

The suspension of internet and phone services isn’t always carried out statewide or even citywide. Some, such as the one in New Delhi, are instituted across a few districts for a short period of time.

The government says it uses internet blackouts to maintain law and order, and emphasizes that the restrictions are temporary.

India’s Ministry of Information and Broadcasting issued an advisory Friday night asking broadcasters across the country to refrain from using content that could inflame further violence, or that “promotes anti-national attitudes.”

But broadband and mobile internet services have been blocked for more than four months in Indian-administered Kashmir amid an ongoing crackdown in the country’s only Muslim-majority region, which was stripped of its semi-autonomous status and demoted from a state into a federal territory in August.

The blackout there has derailed the economy, medical services and education.

“Such sweeping measures are more like collective punishment than a tactical response,” Akshaya Kumar of Human Rights Watch wrote earlier in the week.

For students and other demonstrators who have been marching in India’s streets, the internet is a tool to assemble masses.

Akruti Gupta, a college student, has been participating in the protests against the new citizenship law, mobilizing other students to take part through multiple WhatsApp groups.

That was until Thursday, when she found her internet service barred at New Delhi’s Jantar Mantar, a 17th century monument where thousands had gathered to demand the revocation of the controversial law.

“The government is trying to put a lid on our voices by banning communication as it fears the calls for equality and justice are growing louder,” said Gupta.

From graffiti to leaflets to knocking on doors, protesters are using traditional methods to bypass internet disruptions.

“We have resorted to door-to-door campaigning as we know that this government can anytime ban the internet as it did in Kashmir,” said Raza Hassan, a student protesting outside New Delhi’s Jamia Millia Islamia University.

On Thursday, when internet services were snapped in parts of the Indian capital, Arvind Kejriwal, New Delhi’s chief official, inaugurated a free public WiFi network, promising 11,000 free WiFi hotspots to cover the whole city in the next six months.

“It is an irony that the day we started the free internet scheme, the internet services are being shut in the city,” Kejriwal, a Modi critic, told reporters.