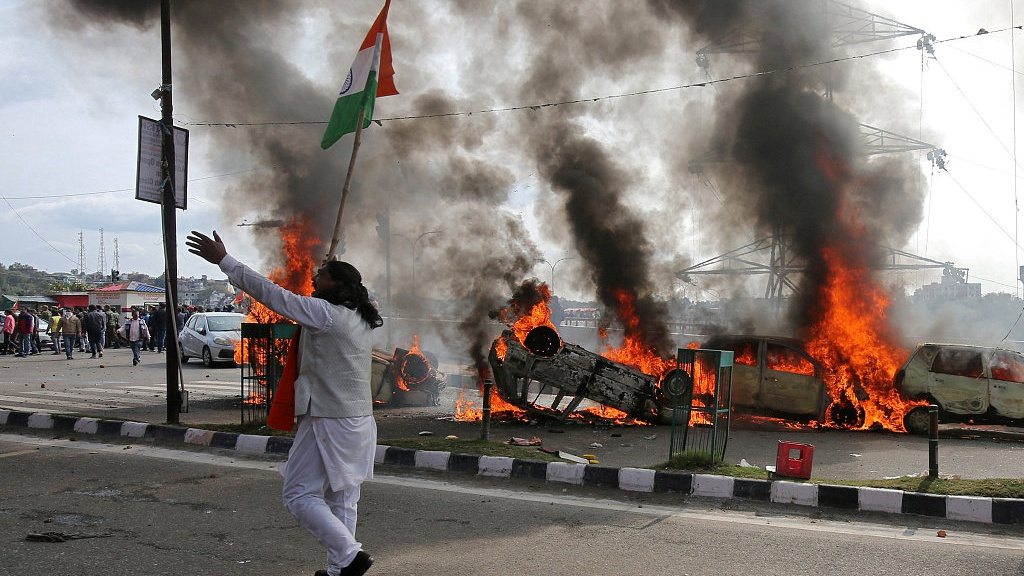 A demonstrator reacts next to burning cars during a protest against an attack on a bus that killed 44 Central Reserve Police Force (CRPF) personnel in south Kashmir in Jammu, February 15, 2019. (Photo: VCG)

"The Ministry of External Affairs will initiate all possible steps, and I am here referring to all possible diplomatic steps, which have to be taken to ensure the complete isolation from the international community of Pakistan," he told reporters on Friday.

At least 44 people were killed in the attack, as a suicide bomber rammed a car into a bus carrying Indian paramilitary police. The Pakistan-based militant group Jaish-e-Mohammad has claimed responsibility.

Indian security analysts said the attack is the deadliest in the history of Kashmir militancy since 1989.

The Indian government was quick to accuse Pakistan, saying it was letting militant groups operate on its soil. Islamabad rejected that claim, and called the attack a matter of "grave concern."

Jaitley said India would remove most favored nation (MFN) trade privileges that had been accorded to Pakistan, however bilateral trade between the two countries is barely $2 billion.

After meeting with security advisers to discuss options on Friday, Modi said India "will give a befitting reply," stressing that "our neighbor will not be allowed to destabilize us."

Beijing urged Pakistan and India to "address their issues through dialogue and consultation" and "face the militants together to maintain regional stability and security."

Thursday's car bomb attack was carried out at 3:15 p.m. local time on a national highway near Lethpora village in Pulwama district, about 27 km south of Srinagar city, the summer capital of Indian-controlled Kashmir.

Kashmir, the Himalayan region divided between India and Pakistan, is claimed by both in full. Since their independence from Britain in 1947, the two countries have fought three wars, two exclusively over Kashmir.