India to continue rebel peace accord push in troubled areas 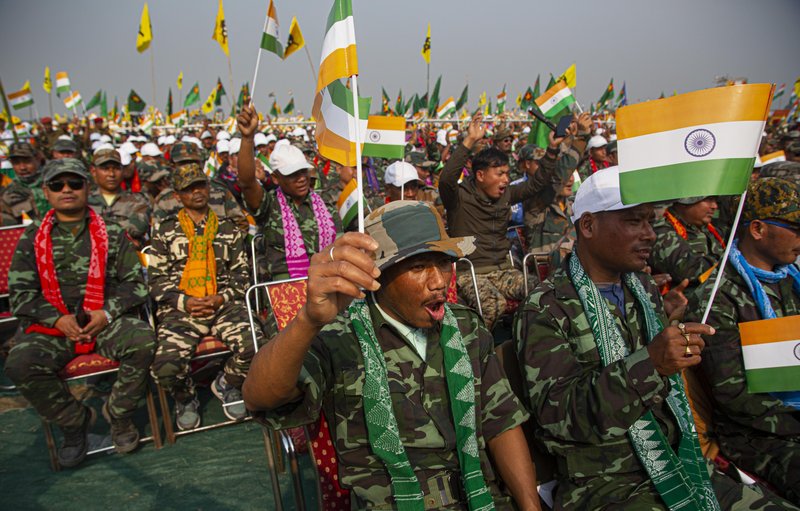 National Democratic Front of Bodoland cadres shout slogans at an event to celebrate signing of a peace accord in Kokrajhar, a town 250 kilometers (150 miles) west of Gauhati, India, Friday, Feb. 7, 2020. (Photo: AP)

Prime Minister Narendra Modi said Friday his government will continue its peace push in insurgency-wracked northeastern India, where accords with key rebel groups have led to the surrender of thousands of fighters.

Modi said decades of violent insurrection ended in the Bodo tribal heartland in Assam state after the signing of a Jan. 27 agreement with the rebels.

He addressed hundreds of thousands of people, mostly Bodo tribespeople, while celebrating the signing of the peace accord Friday in Kokrajhar, a town 250 kilometers (150 miles) west of Gauhati, the state capital.

They included several hundred rebels from the National Democratic Front of Bodoland who turned out in their olive-green fatigues after surrendering to government forces at a ceremony on Jan. 30.

Leaders of the four factions that comprise the NDF welcomed the prime minister with traditional scarves on the dais, but they did not speak.

On Jan. 28, Gobinda Basumatary, one of the leaders who signed the accord, said that it would “bring peace after three decades. Since enough of autonomy is given to us as part of the accord, the demand for a separate Bodo state is no longer necessary.”

On Thursday, the Bodo tribespeople lit 70,000 oil lamps in their homes rejoicing in relief from long-simmering land and ethnic disputes in the region.

“I can understand your feelings when you decided to bid adieu to your guns, bombs and pistols and return to normal life. I will ensure that no thorn shall hurt you now in the road to peace,” Modi said.

The government plans to provide technical skills to those who surrendered to take up jobs in the near future.

Dozens of rebel groups have been fighting the government and sometimes each other for years in seven states in northeast India. They demand greater regional autonomy or independent homelands for the indigenous groups they represent.

The rebels accuse the federal government of exploiting the region’s rich mineral resources but neglecting the local people.

Modi told the rally on Friday that insurgency was on the wane in the northeast and his government was trying to reach similar deals with insurgent groups mainly in Nagaland and Manipur states.