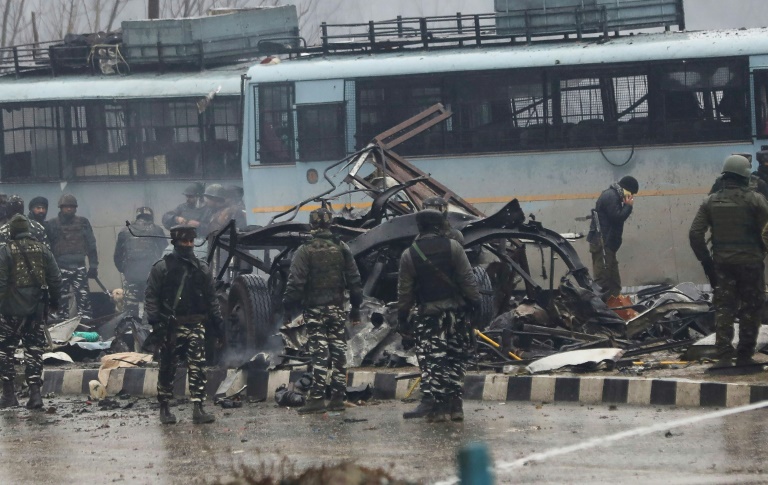 At least 41 paramilitary troops were killed on Thursday as explosives packed in a van ripped through a convoy. (Photo: AFP)

India and Pakistan's troubled ties risked taking a dangerous new turn on Friday as New Delhi accused Islamabad of harbouring militants behind one of the deadliest attacks in three decades of bloodshed in Indian-administered Kashmir.

At least 41 paramilitary troops were killed on Thursday as explosives packed in a van ripped through a convoy bringing 2,500 troopers back from leave not far from the main city Srinagar, police said.

Kashmir has been split between India and Pakistan since independence from Britain in 1947 with both nuclear-armed countries, which have fought three wars, claiming it as their own.

Jaish-e-Mohammed is largely considered to be one of the most active Pakistan-backed insurgent groups fighting in Kashmir, and was the first militant group to introduce suicide bombers into the conflict. 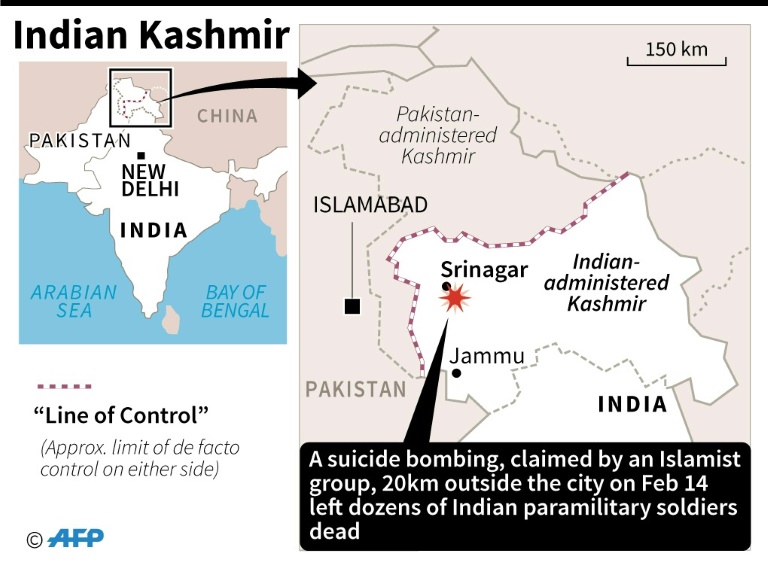 Kashmir has been split between India and Pakistan since independence from Britain in 1947. (Photo: AFP)

India's foreign ministry said that Jaish-e-Mohammed head Masood Azhar "has been given full freedom by... Pakistan to operate and expand his terror infrastructure in territories under the control of Pakistan and to carry out attacks in India and elsewhere with impunity".

"I want to tell the terrorist groups and their masters that they have committed a big mistake. They have to pay a heavy price," Indian Prime Minister Narendra Modi said Friday after an emergency cabinet meeting.

"If our neighbouring country thinks that it will succeed in creating instability through such acts and conspiracies in our country, they should stop dreaming," Modi said, adding that the "blood of the people is boiling".

Arun Jaitley, finance minister, promised all steps to "ensure the complete isolation from the international community of Pakistan of which incontrovertible evidence is available of having a direct hand in this gruesome attack".

Islamabad, however, hit back at the suggestion.

"We strongly reject any insinuation by elements in the Indian media and government that seek to link the attack to Pakistan without investigations," the Pakistan foreign ministry said.

The United States condemned the attack in "the strongest terms", and called on "all countries...to deny safe haven and support for terrorists". 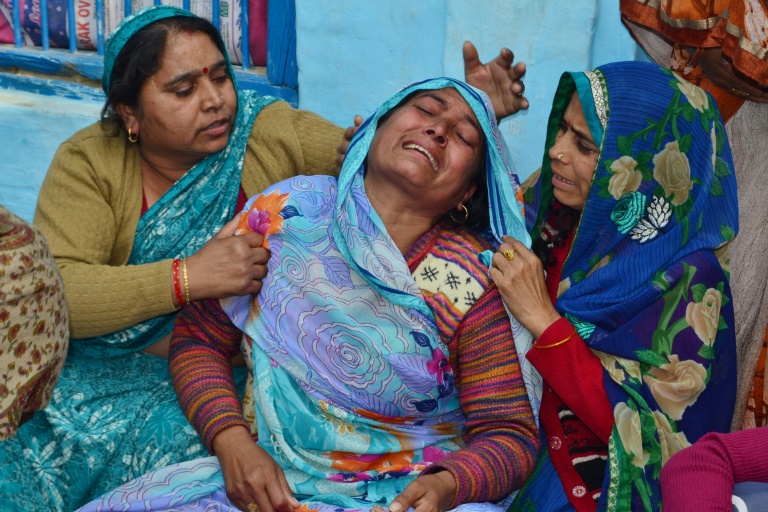 The husband of Mamta Rawar (C) was killed in the attack on the convoy, which was bringing 2,500 troopers back from leave. (Photo: AFP)

Two buses of the Central Reserve Police Force (CRPF) in the 78-vehicle convoy on the Srinagar-Jammu highway bore the brunt of the blast, heard miles away.

"No one from the first bus survived," a senior police official told AFP on condition of anonymity, predicting the death toll could rise higher still.

Afterwards, hundreds of government forces cordoned off around 15 villages in the district the bomber came from and conducted house-to-house searches, a police officer and witnesses said. 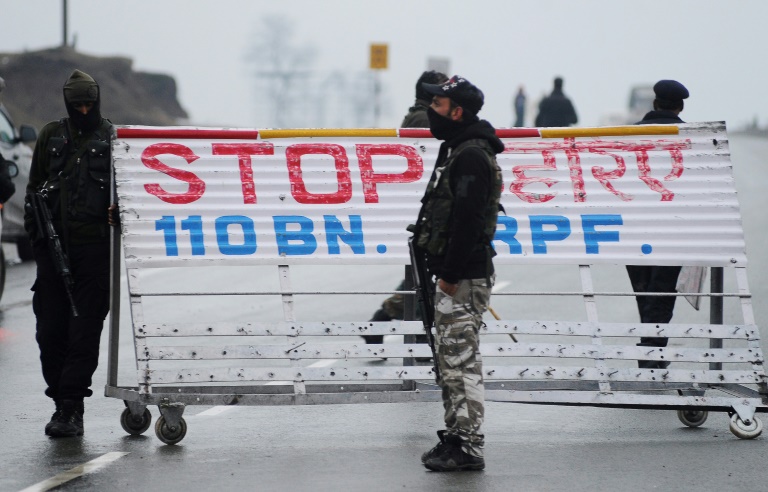 The attack surpasses one in 2016 that was the biggest in 14 years, claiming the lives of 19 soldiers in a brazen pre-dawn raid by militants on the Uri army camp. (Photo: AFP)

A team of elite anti-terror agency investigators were flying to Srinagar on Friday and India's interior minister Rajnath Singh was also scheduled to visit.

The attack surpasses one in 2016 that was the biggest in 14 years, claiming the lives of 19 soldiers in a brazen pre-dawn raid by militants on the Uri army camp.

India responded to that with the now-famous "surgical strikes" -- there is a Bollywood movie -- across the heavily-militarised Line of Control, the de-facto border, several miles into Pakistan-administered Pakistan.

"The current situation has all the making of an India-Pakistan crisis," said Moeed Yusuf from the US Institute of Peace. "The next 24-48 hours are crucial. This could get bad." 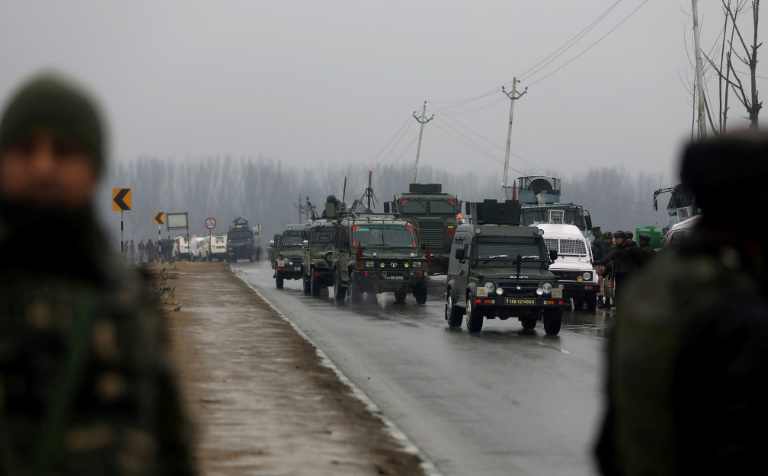 After the attack, hundreds of government forces cordoned around 15 villages in the district the bomber came from and conducted house-to-house searches. (Photo: AFP)

"The hope was that India and Pakistan will get back to talking after the Indian elections later this year. I think the hawks on both sides are going to make it very difficult for that to happen now."

On Friday India announced it was withdrawing its Most Favoured Nation Status -- covering trade links -- on Pakistan.

But beyond this, Modi has "no easy options", Manoj Joshi from the New Delhi based Observer Research Foundation think-tank told AFP.

Military action could "escalate into something big", he said. 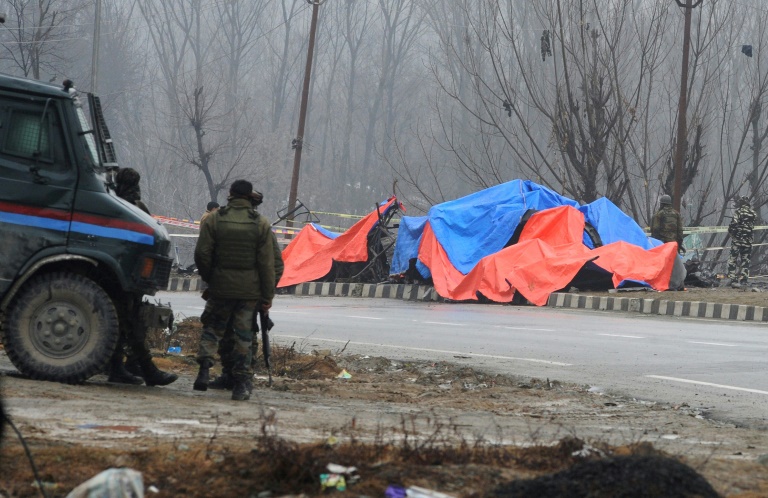 Kashmir, where an armed conflict erupted in 1989, has seen increased violence in recent years. (Photo: AFP)

"Diplomatic action against Pakistan is another option. But the United States is cosying up with Islamabad to seek an exit from Afghanistan. China has also deep interests in Pakistan."

Kashmir, where an armed conflict erupted in 1989, has seen increased violence in recent years. Last year was the deadliest in a decade, with rights monitors saying almost 600 people died -- mostly civilians.