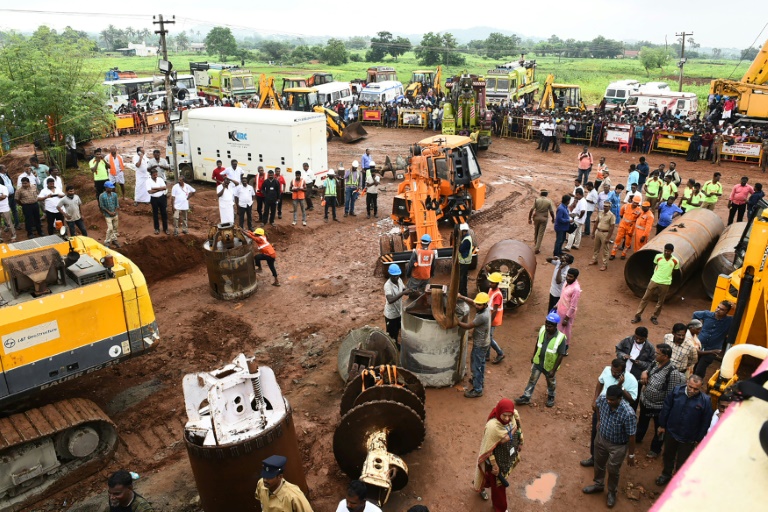 Workers used an oil drill to dig a hole parallel to the well, but the rig broke down around 10 metres (33 feet) from the boy because of the rocky ground. (Photo: AFP)

The body of a two-year-old boy trapped 26-metres (85-feet) down a well in southern India for more than three days was recovered on Tuesday, authorities said.

Sujith Wilson was the second toddler in four months to grab nationwide attention after falling into the 30-centimetre (one-foot) diameter pipe while playing near his home in the Tiruchirappalli district of Tamil Nadu state on Friday.

"The body was retrieved using special equipment and he was in a decomposed state," district official S. Sivarasu told journalists.

He added that a post-mortem examination would be carried out to determine the cause of death.

A thermal camera had been used to monitor the child's temperature while oxygen was supplied through a pipe.

Rescuers said the toddler was unconscious but breathing until Sunday morning, but they had been unable to check his condition since then as he had slipped further down.

Workers used an oil drill to dig a hole parallel to the well, but the rig broke down around 10 metres (33 feet) from the boy because of the rocky ground.

Attempts to use robotic devices to lower ropes to latch onto the boy's wrist failed on Saturday.

Politicians had started a vigil at the site and Prime Minister Narendra Modi and opposition leader Rahul Gandhi offered their "prayers" in Twitter statements as national attention focussed on Tiruchirappalli.

It is the latest in a series of incidents involving children falling into disused wells in rural India.

In June, a two-year-old boy died after spending four days trapped inside one in Punjab state.

In 2006 the rescue of a six-year-old made international headlines when he was recovered safely in Haryana state after being stuck in an 18-metre (60-foot) well for 48 hours.

The wells are very common across rural India as they are a key source of water for farmers and domestic users.