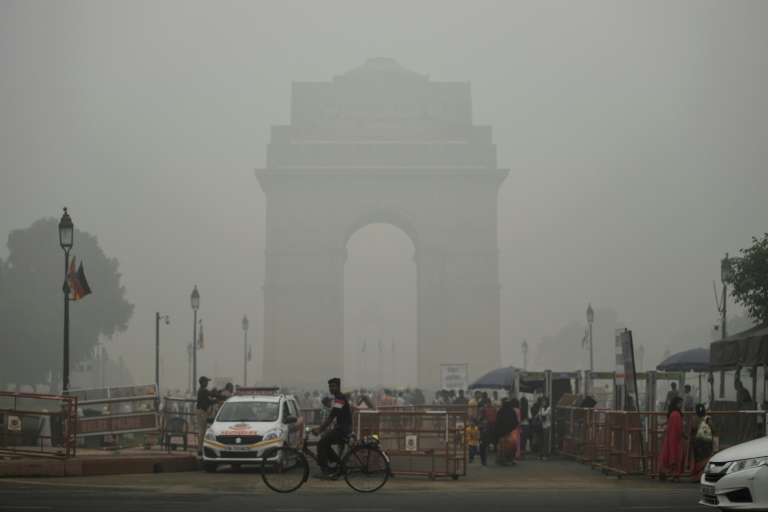 India Gate in New Delhi is pictured through a choking smog that has blanketed the capital. (Photo: AFP)

India's capital New Delhi was enveloped in heavy, toxic smog Sunday -- the worst levels in recent years -- with flights diverted or delayed as politicians blamed each other for failing to tackle the crisis.

Every winter, the megacity of 20 million people is blanketed by a poisonous smog of car fumes, industrial emissions, and smoke from stubble burning at farms in neighbouring states.

The reading for pollutants in the atmosphere hit 810 micrograms per cubic metre Sunday morning, in the "hazardous" zone according to the US embassy in Delhi, which independently monitors pollution levels.

Locals complained of sore eyes and throats, with some residents wearing masks to protect themselves.

Visibility was so poor major carriers Air India and Vistara said Sunday flights were being delayed or diverted to and from Delhi's airports.

Some cricket players and coaches have also been training in masks ahead of the Twenty20 international between Bangladesh and India later Sunday.

The shocking conditions sparked a blame game between state and federal politicians over who was responsible for the conditions, which authorities said Friday had reached "emergency" levels.

In a tweet last week, Kejriwal called on the state governments of neighbouring Punjab and Haryana to take action.

"Delhi has turned into a gas chamber due to smoke from crop burning in neighbouring states," he tweeted.

Federal Environment Minister Prakash Javadekar accused Kejriwal of politicising the issue and presenting the two states "in a bad light and as villains".

Schools in Delhi have already been ordered closed until Tuesday, and construction halted From Monday there will be an odd/even car license plate scheme to cut traffic.

Last year, a UN report found 14 of the world's 15 most polluted cities were in India, with one US study saying it kills a million people prematurely every year.