NEW DELHI, Nov. 27 (Xinhua) -- After two days of logjam, the Indian government on Friday finally yielded and allowed the farmers, particularly from northern states Punjab and Haryana, to carry out their protests inside the national capital Delhi. 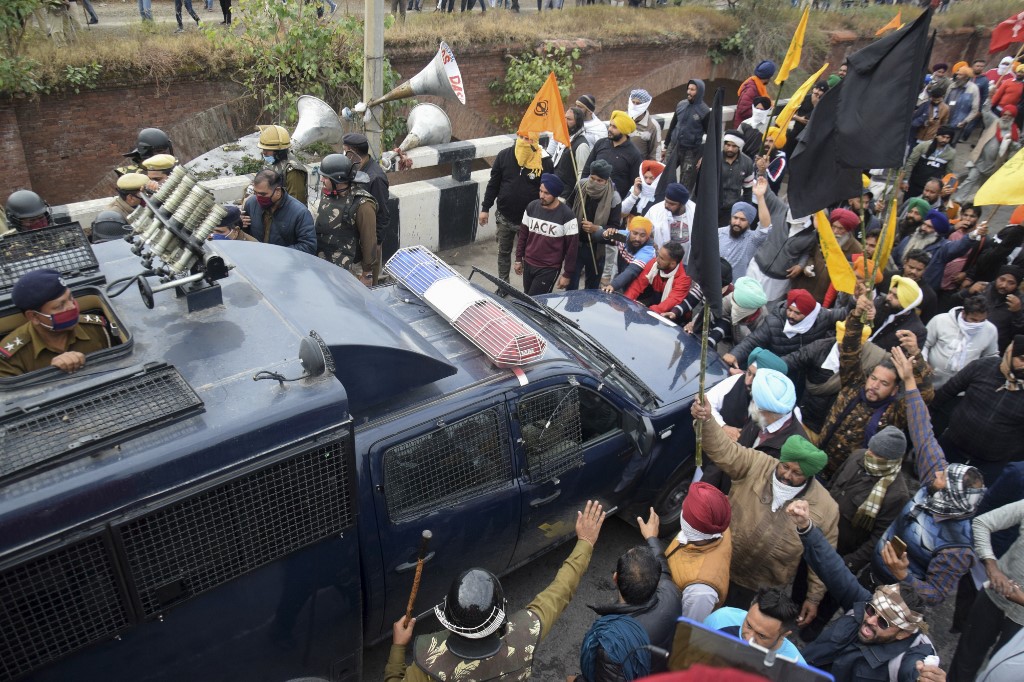 Farmers stop a police vehicle during a march to India's capital New Delhi to protest against the central government's recent agricultural reforms, in Ambala on November 26, 2020.(Photo: AFP)

There had been a stalemate between the agitated farmers, protesting against the recently passed three farm laws, and the Centre Government as the latter stopped the former from entering Delhi.

A large number of farmers from the two states had congregated at the inter-state borders attempting to cross into Delhi. But their attempts were thwarted by the police personnel who too were present in large numbers over the past two days.

Local media quoted a farmers' union president Darshan Pal as saying "We have been allowed a safe passage to Delhi."

The farmers' protests had turned violent over the past two days as they resorted to stone pelting and breaking the barricades installed by the police. Some even threw the barricades into the rivers.

The police personnel used water-canons and teargas shells to control and disperse the mobs. The situation really turned tense at the Singhu Border between Delhi and Haryana.

Finally, the Delhi Police on Friday allowed farmers to protest at the "Nirankari Samagam Ground" in Burari, located in north Delhi. The Delhi Police works under the direct control of the federal government's Home Ministry that looks after the country's internal security issues.

Delhi Police Commissioner S.N. Shrivastava appealed to the protesting farmers to carry out their protests in a peaceful manner.

"I welcome the Centre's decision to allow farmers to enter Delhi to exercise their democratic right to protest. They should also now initiate immediate talks to address farmers' concerns on the #FarmLaws and resolve the simmering issue," tweeted Singh.

The three farm laws passed by the country's Parliament are - the "Farmers' Produce Trade and Commerce (Promotion and Facilitation) Act 2020", the "Farmers (Empowerment and Protection) Agreement on Price Assurance and Farm Services Act 2020", and the "Essential Commodities (Amendment) Act 2020".

The farmers allege that the new farm laws were detrimental to their interests, while the federal government argues that the new laws would help deregulate the agricultural markets and help farmers in the country earn more.