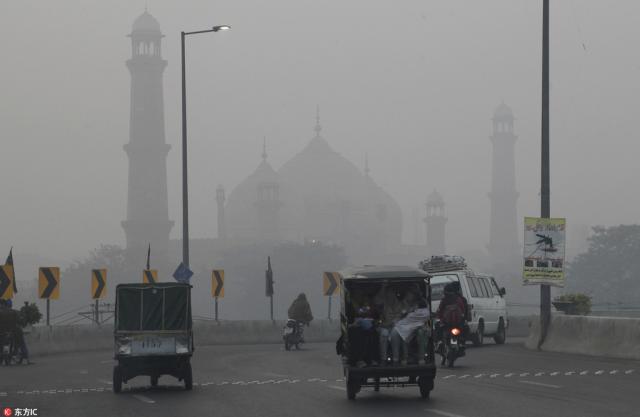 Pakistani officials has said that stubbles burnt by Indian farmers after wheat harvest caused thick blanket of fog in east Punjab province of Pakistan.
Talking to Xinhua on Saturday night, officials with Environment Protection Department of Punjab province said that smog is causing various diseases among residents of Punjab and the provincial government is taking measures to control the situation.
The department's minister Zakia Shah Nawaz Khan said that the smog has been engulfing the province for two weeks, and is feared to continue for the coming week or so.
She added that the smoke of the stubbles from Indian farms moved at a velocity of 7 to 8 km per hour and travelled to Punjab, resulting in dense fog in the province.
Local experts said that the total Air Quality Index in provincial capital of Lahore is 357 whereas the maximum limit should be around 100, adding that if the situation is not controlled, the highest level is feared to exceed 500 in the coming days.
Syed Mubashir Hussain, an official of the environment department said that the provincial government has banned stubble burning across the province and violators are being arrested.
A total of 197 First Information Reports have been filed against violators and 65 people have been arrested due to stubble burning and solid waste burning. 175 pollution-causing units have been stopped. About 15,718 smoke emitting vehicles have been confiscated, and a total of 43 rupees lac (about 43,000 U.S. dollars) fine has been imposed, Hussain told Xinhua.
Apart from this, brick kilns using substandard fuel and running their units without emission control devices like wet scrubbers, electrostatic precipitators and fly ash arrestors have also been closed, the official said.
Smog has not only affected heath of people, but also caused road accidents. According to local media reports, at least 18 people have been killed and 45 others injured in separate fog-related accidents across the province.
Air traffic was also affected due to smog-caused low visibility. Six domestic flights from various airports have been suspended due to smog, spokesperson of Pakistan International Airlines said in a statement.
Met office said that smog will disappear after rains or heavy winds, but there is no possibility of any of them in the next 48 hours.