Indian navy searches for 78 missing from barge sunk by storm 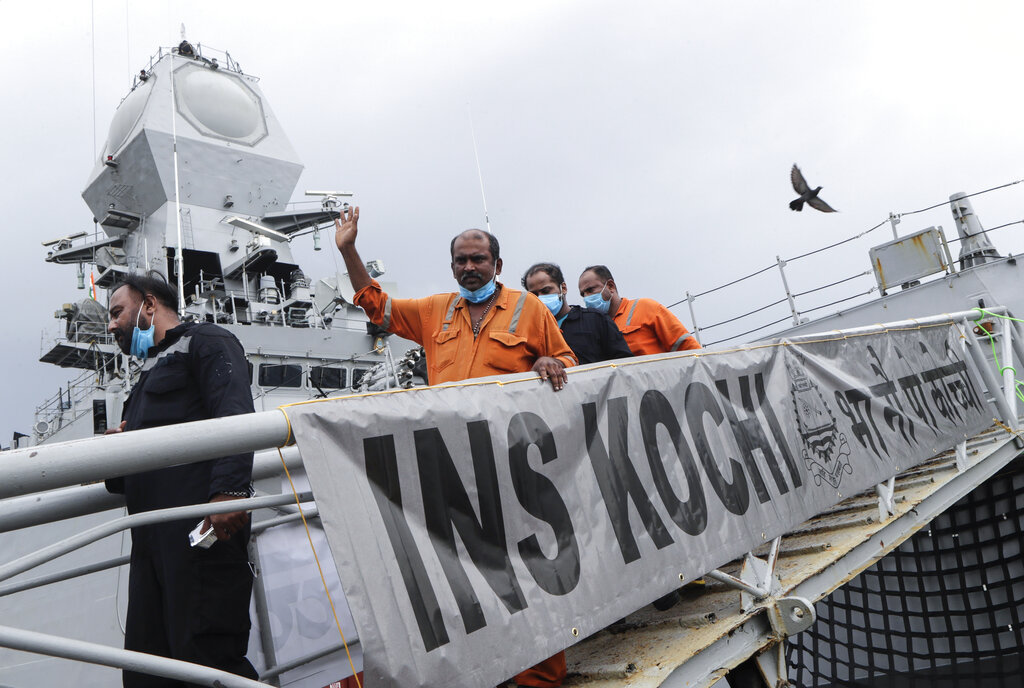 A man waves as people rescued by the Indian navy from a barge that sank in the Arabian sea walk out from Indian naval ship INS Kochi in Mumbai, India, Wednesday, May 19, 2021. (Photo: AP)

NEW DELHI (AP) — Indian navy ships and helicopters searched in rough weather and seas Wednesday for 78 people still missing from a barge that sank off Mumbai as a deadly cyclone blew ashore this week.

Navy Cdr. Alok Anand said 183 people were rescued within 24 hours by three ships and helicopters engaged in the operation.

A survivor told the New Delhi Television news channel that he jumped into the sea with his life jacket and was later picked up by the navy.

In another operation, a navy helicopter rescued 35 crew members of another barge, GAL Constructor, which ran aground north of Mumbai, a government statement said.

Both barges were working for Oil and Natural Gas Corp., the largest crude oil and natural gas company in India.

The company said the barges were carrying personnel deployed for offshore drilling and their anchors gave away during the storm.

Cyclone Tauktae, the most powerful storm to hit the region in more than two decades, packed sustained winds of up to 210 kilometers (130 miles) per hour when it came ashore in Gujarat state late Monday. The storm left at least 25 dead in Gujarat and Maharashtra states.

The cyclone has weakened into a depression centered over the south of Rajasthan state and adjoining Gujarat region, a statement by the Indian Meteorological Department said on Wednesday.

In Nepal, authorities on Tuesday asked mountaineers to descend from high altitudes because the storm system may bring severe weather.

Hundreds of climbers, guides and staff are on various mountains in Nepal, trying to climb the peaks this month when weather is usually most favorable in the high altitudes. Nepal has eight of the world's 14 highest peaks, including Mount Everest.

The Department of Tourism in a statement Tuesday asked climbers and outfitting agencies to monitor the weather and stay safe.

In 2014, snowstorms and avalanches triggered by a cyclone in India killed 43 people in Nepal’s mountains in the worst hiking disaster in the Himalayan nation.

The snowstorms were believed to be whipped by the tail end of a cyclone that hit the Indian coast a few days earlier.

The blizzards swept through the popular Annapurna trekking route and hikers were caught off-guard when the weather changed quickly.