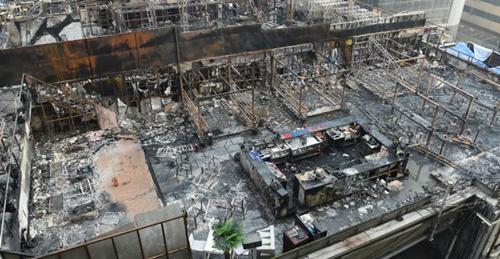 View of a burned building where a rooftop party was being held in Mumbai early on December 29, 2017. (Photo: AFP)

Kevin Bawa and Lisbon Lopez -- both in their thirties -- were arrested on Sunday night, two days after the deadly blaze tore through the "1Above" restaurant, a police spokesman told AFP.

"We have arrested them for culpable homicide not amounting to murder under various sections of the Indian penal code," said Deepak Deoraj.

Many of the victims in Friday's fire were young women attending a birthday party on the rooftop when the fire broke out.

Doctors said they died of asphyxiation, apparently as they tried to flee the burning building.

Witnesses told AFP the victims had difficulty finding the narrow exit door, leading to a stampede in the rooftop precincts.

Accidental fires are common across India because of poor safety standards and lax enforcement of regulations.

The blaze at the Kamala Mills compound, which also houses hotels and media organisations, was the latest disaster to raise concerns over fire safety in India.

It came just over a week after a fire swept through a sweet shop in Mumbai, sparking a building collapse which killed 12 sleeping workers.

Such disasters are particularly common in Mumbai, where millions live in cramped and dilapidated properties because of high rents.

Activists say builders and landlords often cut corners on safety to save costs and have accused Mumbai's civic authorities of negligence and apathy.

Five city officials have been suspended for negligence in connection with Friday's fire.