Indian rescuers to search for eight climbers missing in Himalayas 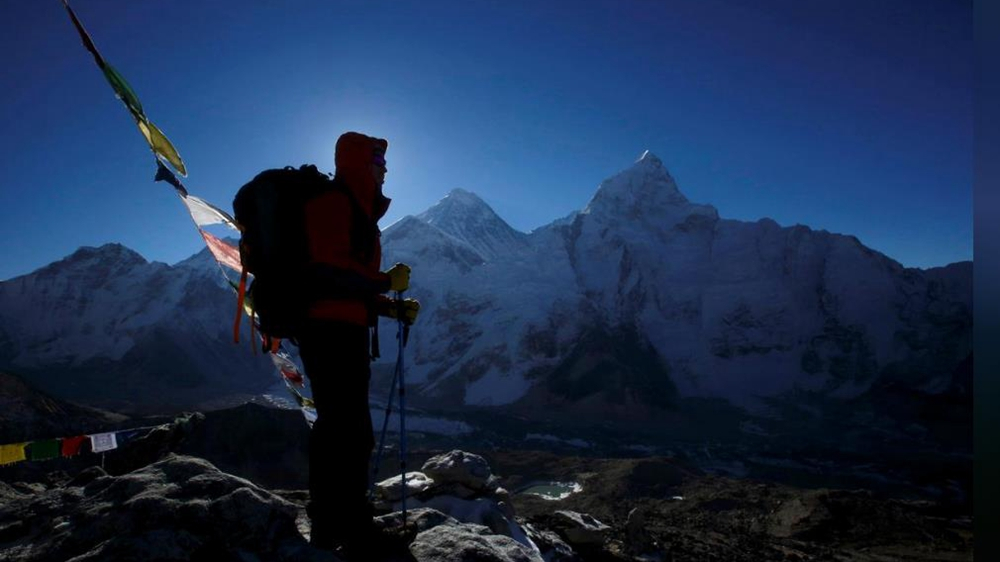 A trekker stands in front of Mount Everest, which is about 8,850 meters high, at Kala Patthar in Solukhumbu District, May 7, 2014. (Photo: CGTN)

An Indian rescue team has been sent to search for eight missing climbers who had been trying to climb the summit of Nanda Devi, the second-highest peak in India, and were probably hit by a large avalanche, two state government officials said.

The officials said that they had been told that those missing include climbers from Britain, the United States, Australia and India.

The rescue effort began on Saturday when the climbers failed to return to base camp. It may take days to trek to the area where they were last known to have been, said Vijay Kumar Jogdanda, the top civil servant in Pithoragarh district of India's mountainous Uttarakhand state.

Others in the group, who had turned back earlier, told officials late on Friday that their fellow climbers had not returned to base camp as planned, Sanjay Gunjiyal, the inspector general of police at the Uttarakhand State Disaster Response Force said.

Rescue operations which began on Saturday were called off in the evening due to harsh weather conditions and would resume on Sunday, Gunjiyal said, adding that an air force helicopter will be used for aerial reconnaissance on Sunday. Helicopters may not be able to land anywhere in the area, given the terrain.

The climbers went missing on the Indian side of the Himalayas near the end of a climbing season that has been particularly deadly this year.

At least nine people have died on the Nepalese side of Mount Everest so far this year, the deadliest climbing season on the peak since 2015.

Indian and international news reports said that the team was led by British guide Martin Moran. On the Facebook page of his Moran Mountain company, the last public entry appears to be on May 22.

It says that the Nanda Devi team had reached their second base camp at 4,870 meters, their home for the next week.

“After a recce of the route they will be making a summit attempt on an unclimbed peak at 6477m. In the words of U.S. rock climbing pioneer Royal Robbins, ‘A first ascent is a creation in the same sense as is a painting or a song'. We wish them all the very best of luck and an incredible climb!”