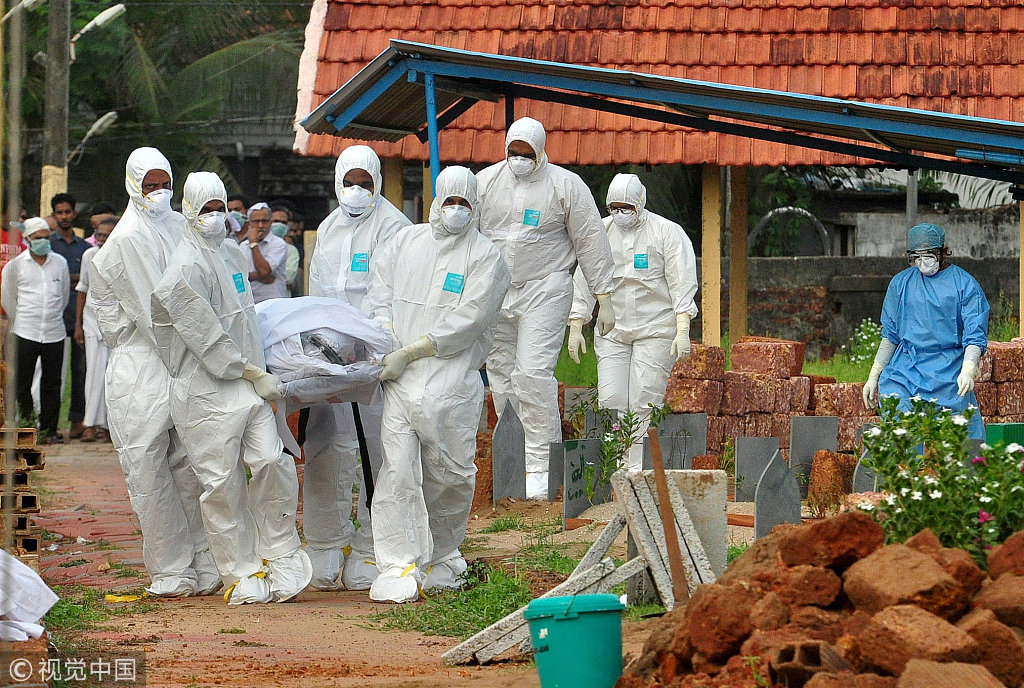 Doctors and relatives wearing protective gear carry the body of a victim, who lost his battle against the brain-damaging Nipah virus, during his funeral at a burial ground in Kozhikode, in the southern Indian state of Kerala, India, May 24, 2018. (Photo: VCG)

India's southern state of Kerala has warned of another outbreak of the deadly Nipah virus that has already claimed the lives of 17 people.

"Though the first phase is under control, we are expecting a second wave in accordance with the global pattern. We have done everything to prepare for it. A second phase could mean more cases," state Health Minister K.K. Shailaja told the media Friday evening.

According to the minister, there is a continued need to be vigilant as the incubation period of the virus is anywhere between two weeks and 20 days.

"We are getting ready to tackle the second phase as there are chances that the virus has spread as it is contagious. We have imported materials to keep our hospital staff safe and we are even training them," she added.

The state government's warning came as a couple of deaths occurred this week in Kozhikode district, the epicenter of the Nipah virus outbreak.

Apart from these deaths in Kozhikode and Mallapuram districts, some 94 people have been quarantined in their homes while 15 others are under treatment in government hospitals, where special wards have been set up for suspected patients.

A senior official said Saturday that people in these two districts have been asked to stay away from crowded places like markets as a precautionary measure. "Schools in Kozhikode will reopen only on June 5 though they have reopened after summer vacation in other parts," he said.

Moreover, massive arrangements have been made at the state-run Kozhikode Medical College and Hospital to observe suspected Nipah cases and 80 rooms have been earmarked for them. "All steps are being taken to ensure the hospital staff are safe," a health official said.

The Indian Health Ministry recently claimed to have contained the virus. "It was a highly localized infection and we have been able to contain it well," Indian Health Secretary Preeti Sudan had said.

Health officials have identified the bat-infested well in the house in Kozhikode district as the likely epicenter of the outbreak of Nipah virus in this country.

This is the third outbreak of Nipah virus in India. Two other outbreaks of the virus were reported in 2001 and 2007, respectively, in eastern state of West Bengal, claiming 50 lives.