NEW DELHI, May 12 (Xinhua) -- India's federal government has asked states to check the practice of dumping bodies of COVID-19 victims into the river Ganga, as the country struggles in a devastating second wave of infections. 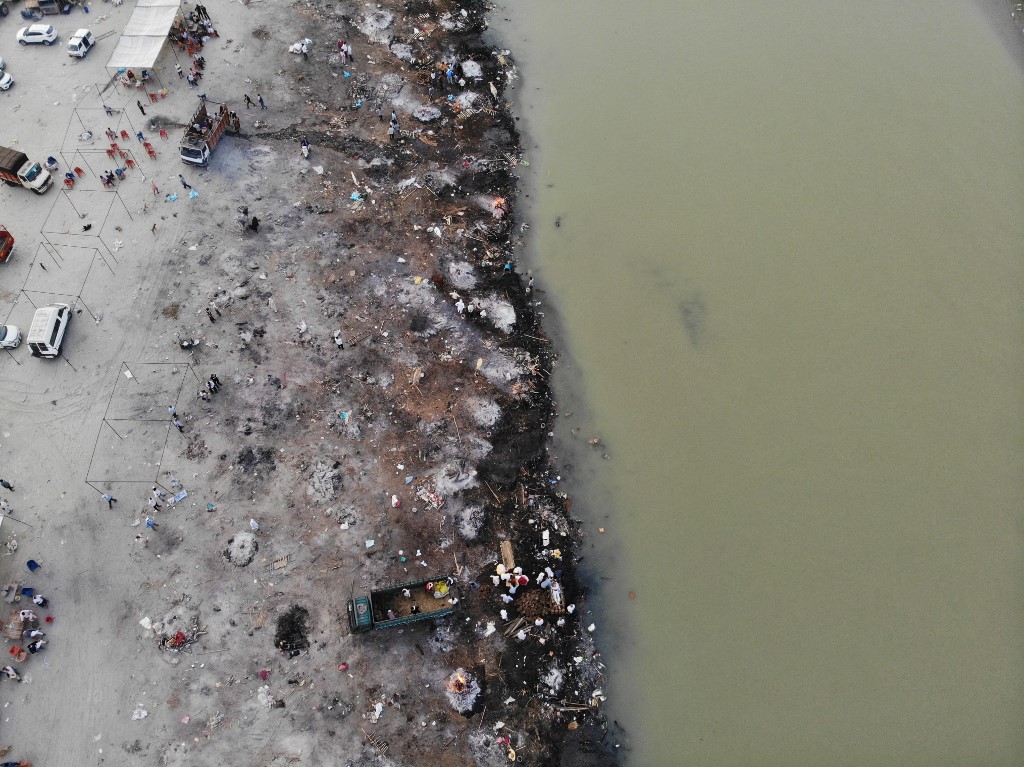 In this aerial photograph taken on May 5, 2021 funeral pyres of Covid-19 coronavirus victims are seen in a cremation ground along the banks of the Ganges River, in Garhmukteshwar. (File photo: AFP)

India's federal minister of Jal Shakti (water resources), Gajendra Singh Shekhawat, said his ministry has taken serious note of the practice and given instructions for its prohibition.

"We have taken serious note of the issue of dumping dead bodies in River Ganga and instituted measures for the prohibition," Shekhawat said, adding that the government will take steps to "ensure all unidentified bodies are disposed as per the protocol."

Over the past few days in the Bihar and Uttar Pradesh states at least 96 corpses were found floating in the river Ganga, officials said Wednesday.

Meanwhile, the Jal Shakti ministry's National Mission for Clean Ganga (NMCG) has urged states along the Ganga to adopt measures to stop people from dumping bodies in Ganga.

In a letter, the NMCG asked local Ganga committees to "ensure strict vigilance along the length of the river within the territorial jurisdiction of the district to prevent and check such future incidences of people dumping dead bodies in Ganga and its tributaries and of any other activity hazardous for river Ganga and health and hygiene of the area."

It has also asked them to submit reports on actions taken in the next 14 days.

Record high numbers of daily new infections and deaths have been reported in past days in India during the second wave of the pandemic. The federal health ministry on Wednesday reported 348,421 new confirmed cases and 4,205 new deaths in the past 24 hours across the Asian country.

The rising death toll from the pandemic has led to overcrowding of morgues, crematoriums and burial grounds.