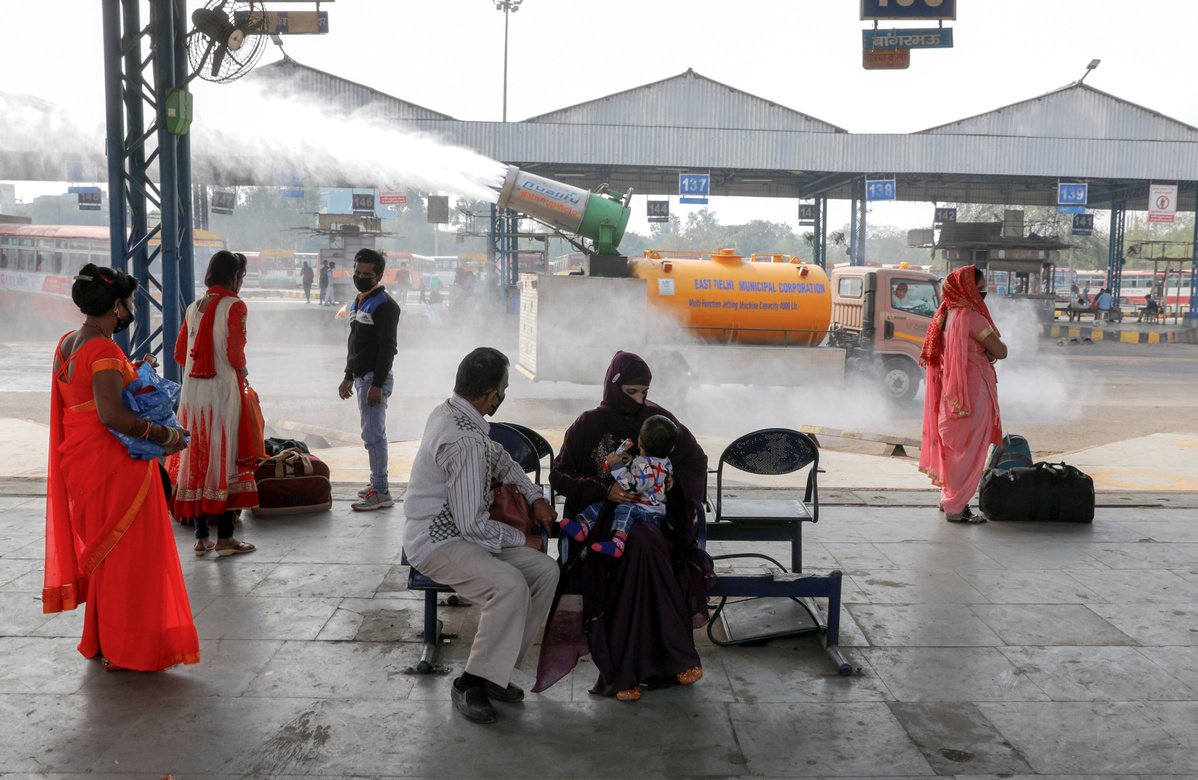 A municipal worker operates an "anti-smog gun", a machine that sprays atomised water into the air to reduce pollution, as passengers are seen at a bus depot in New Delhi, India, Nov 18, 2020. [Photo/Agencies]

The southern state of Telangana received a major recognition recently when Hyderabad, its capital, was named Global Tree City for 2020 by the Arbor Day Foundation and the Food and Agriculture Organization of the United Nations.

Hyderabad is the only city in India that figures in the list of the world's 51 Green Cities identified by the international body. The city achieved the status for its sustained green drive during which 24 million trees were planted across the city in the past five years.

"We are now slowly experiencing the good effects of the green campaign," said Lokesh Jaiswal, Telangana's principal chief conservator of forests. "Not only this earned us international recognition but we also find significant change on the ground. We've noticed reductions in pollution levels to a significant level."

Another official, Srikant Babu, said Telangana had increased the green coverage to 24 percent and is trying to raise it to 33 percent.

"We were able to plant 24 million trees in the city in the past six years and we are experiencing the positive changes in the environment," Babu said. "The state has been receiving good rainfalls and we have also felt a significant dip in temperature for the past two years, which are wonderful signs."

Another factor that prompted the Telangana government to launch massive plantation drives was the heat waves claiming hundreds of lives every year. Authorities said the impact of the heat waves had significantly eased since the afforestation drive began.

The eastern Indian state of Bihar has also launched an extensive plantation drive to increase its green cover with the aim of cutting pollution. Last year, the state government headed by chief minister Nitish Kumar declared it had planted 34.7 million trees under this campaign. The government has announced it will increase spending on green campaigns over the next two years.

As part of the plan, the government is cleaning 3,000 ponds, renovating 8,387 wells, 1,600 small water bodies and building 6,000 soak-pits and 2,000 check dams on small rivers to recharge groundwater, apart from planning millions of trees.

The government says the initiative will prove to be a boon for the entire state because it is set to boost the green campaign. The government wants to increase the green cover from the existing 15 percent to 17 percent in the next two years by way of this campaign launched on Oct 2, 2019.

Environmentalists have described the green campaigns as wonderful efforts while asking other Indian states to follow them seriously to capture carbon and regulate temperature.

"Indian cities have witnessed rapid urbanization in the past decade which resulted in reduction of green space," said Polash Mukherjee, who heads the air quality and climate team at the Natural Resources Defense Council. "Such afforestation campaigns will really prove to be a boon by increasing oxygen supply and bringing temperature level down."

Environmentalist Anil Prakash Joshi, founder of Himalayan Environmental Studies and Conservation Organization, said the initiative would contribute to the ecosystem of the Himalayas.