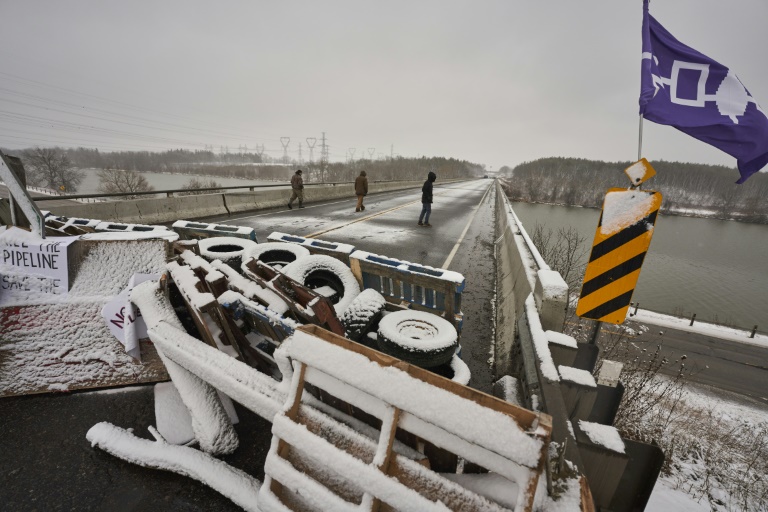 First Nations protestors walk on a bridge past their barricade on Highway 6 near Caledonia, Ontario which the protestors set up in support of the Wet'suwet'en hereditary chiefs and the Tyendinaga Mohawks on February 26, 2020.(Photo: AFP)

Two days after police cleared an indigenous blockade of a key Canadian rail artery east of Toronto, protesters were back Wednesday lighting fires on tracks and throwing rocks at passing trains.

"It is extremely concerning to see people endangering their lives and the lives of others by trying to interfere with the trains, but we're working hard to resolve this," said Prime Minister Justin Trudeau.

In parliament he reiterated: "The blockades must come down and stay down."

Meanwhile, new protests have popped up across the country since Monday, briefly disrupting commuter trains in Toronto as government and federal police offices, as well as a museum in Manitoba, were vandalized.

And in Quebec, Premier Francois Legault said Mohawks in the Kahnawake community south of Montreal had armed themselves with assault rifles -- which a Mohawk leader denied.

Protesters had mounted a crippling 18-day blockade on a Canadian National Railway line near Belleville, Ontario and elsewhere on February 6, in support of a small group of indigenous chiefs fighting construction of a natural gas pipeline in British Columbia.

The disruptions to rail traffic -- the backbone of Canada's transportation system, moving more than Can$250 billion ($190 billion) in goods annually -- led to supply shortages and job layoffs.

Police moved in on Monday to clear the blockades after the government's attempts to establish a dialogue with the Wet'suwet'en traditional hereditary chiefs -- who are at the center of the pipeline row -- went unanswered.

But the demonstrations have now mushroomed into a broader fight for indigenous rights.

"We will not allow your voices to be criminalized or marginalized," a protestor on the steps of the British Columbia legislature in Victoria told a crowd.

A few kilometers away, others poured gasoline on train tracks, and threw rocks, wooden planks and debris at passing trains.

"Lighting a fire under a moving train," he said, is especially dangerous if trains are transporting flammable materials. "It could have ignited."

Canadian National Railway noted four blockades of its tracks in Ontario and British Columbia on its website, but said trains were still moving on three of the lines. Only one line west of Toronto was closed.

It has also reached a deal with Canadian Pacific to reroute some trains on the competitor's tracks in order to sidestep protests.

Minister of Crown-Indigenous Relations Carolyn Bennett said she was hoping to hear from Wet'suwet'en hereditary chiefs about possible talks.

The chiefs have demanded that federal police leave their ancestral lands in northern British Columbia and construction of the Coastal GasLink pipeline be halted as pre-conditions for negotiations.