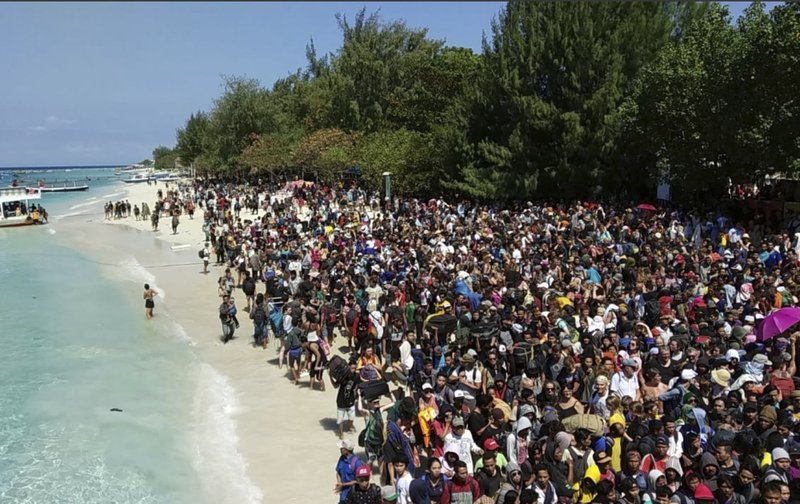 Bangkok (People’s Daily) – Rescue and relief teams saved over 1,000 locals and tourists who were stranded on the Indonesian islands of Gili Trawangan, Gili Air, Gili Meno, after a magnitude 7.0 earthquake struck the country’s southern region on Sunday.

A team of relief specialists from the Indonesian National Board for Disaster Management (BNDM), Indonesia Emergency Center and Indonesia’s army carried out rescue efforts that saved 39 Chinese tourists.

It was reported that some of the rescued Chinese travelers were already headed home.

Indonesian officials announced that despite the large crowds, the Bali and Lombok airports remain fully operational. So far, no reports of Chinese fatalities have emerged from the second earthquake disaster to hit Lombok Island in the same week.

The three ‘Gili Islands’ together make up one of the country’s most popular tourist destinations. After Sunday’s quake, the Chinese Consulate-General in Denpasar contacted the Chinese tourists trapped on all three islands to confirm they were safe.

Sunday evening a powerful earthquake flattened houses and toppled bridges on Lombok, killing at least 91 people and rattling the heavily populated island of Bali. Government officials said they expect the death toll to climb, and by Monday afternoon had already reached 142.

In what was the first of two quakes to strike in the same week, on July 29, 16 people were killed and hundreds of homes damaged that left many trapped and who were later killed during Sunday’s quake.

Indonesia is one of the most natural disaster-prone nations on the planet. The country straddles the Pacific "Ring of Fire,” where tectonic plates collide with one another and many volcanic eruptions and earthquakes occur annually.

In 2004, a tsunami stretching most of the Indian Ocean’s southern region claimed 226,000 lives where over half of the victims were in Indonesia.