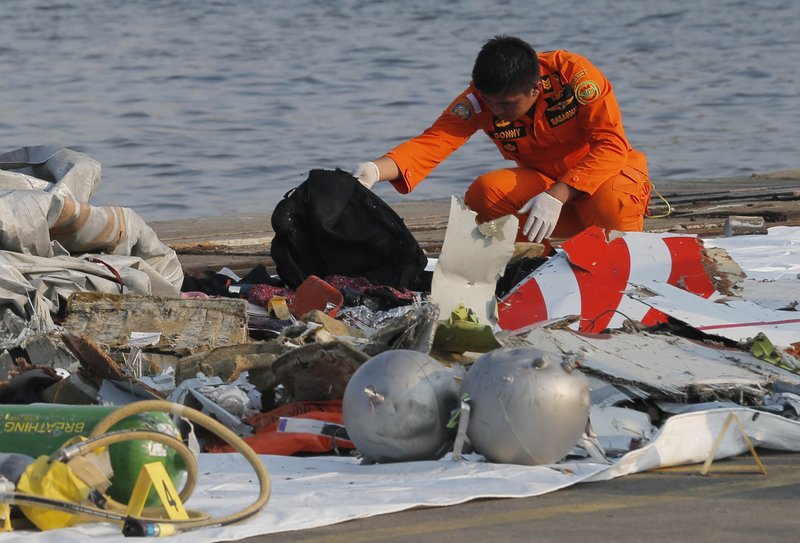 Search and rescue personnel worked through the night to find victims of the Lion Air plane crash in Indonesia, sending 24 body bags to identification experts as the airline flew dozens of grieving relatives to the country’s capital.

The 2-month-old Boeing jet crashed into the Java Sea early Monday, just minutes after taking off from Jakarta, killing all 189 people on board.

The National Search and Rescue Agency said Tuesday that 10 intact bodies as well as body parts had been recovered. President Joko Widodo had ordered the search and rescue effort to continue through the night.

The disaster has reignited concerns about safety in Indonesia’s fast-growing aviation industry, which was recently removed from European Union and U.S. blacklists.

Data pinged from the Boeing 737 Max 8 showed erratic speed, altitude and direction in the minutes after takeoff. Safety experts cautioned, however, that the data must be checked for accuracy against the plane’s so-called black boxes, if they are recovered.

Specialist ships and a remotely operated underwater vehicle have been deployed to search for the plane’s hull and flight recorder.

Distraught family members struggled to comprehend the sudden loss of loved ones in the crash of the 2-month-old Lion Air plane with experienced pilots in fine weather.

They gathered at crisis centers set up by the authorities at airports, hoping desperately for a miracle. But a top search official, citing the condition of the remains recovered, said no survivors are expected.

The disaster is a setback for Indonesia’s airline industry, which just emerged from decadelong bans by the European Union and the U.S. over safety concerns.

President Joko Widodo ordered an investigation and urged Indonesians to “keep on praying.”

The crash of the Boeing 737 Max 8 is the latest in a series of tragedies that have struck Indonesia this year, including earthquakes and a tsunami that killed several thousand people.

An air transport official, Novie Riyanto, said the flight was cleared to return to Jakarta after the pilot made a “return to base” request two to three minutes after taking off. It plunged into the sea about 10 minutes later. Weather conditions were normal but the plane, which Lion Air received in August, had experienced an unspecified technical issue on its previous flight.

Relatives and friends wept, prayed and hugged each other as they waited at Jakarta’s airport and at Pangkal Pinang’s airport on Bangka island off Sumatra where the flight was headed. Some including Indonesian Finance Minister Sri Mulyani headed to the search and rescue agency’s headquarters in Jakarta for information. About 20 ministry staff were on the flight.

Latief Nurbana said he and his wife Yeti Eka Sumiati stayed up late Sunday talking to their 24-year-old son Lutfi Nuramdani, squeezing every moment they could from his weekend visit to Jakarta to catch up on his life in Pangkal Pinang.

Nurbana said they talked until falling asleep and Sumiati woke up early to take their son, a post office worker, to the airport.

“Last night, we were chatting together about his wife who is now seven months’ pregnant, his plans and his dreams with his own small family until we fell asleep,” he said as his wife wept and clung to him.

More than 300 people including soldiers, police and fishermen are involved in the grim search, retrieving aircraft debris and personal items such as a crumpled cellphone, ID cards and carry-on bags from the seas northeast of Jakarta.

Search and Rescue Agency chief Muhammad Syaugi said he’s certain it won’t take long to locate the hull of the aircraft and its black box due to the relatively shallow 25 to 30 meter (100 to 115 foot) depths of the waters it plunged into. Three specialized search ships, including one from Singapore, were headed to the crash location.

The jet, on a 1-hour flight, was carrying 181 passengers, including one child and two babies, and eight crew members.

Lion Air said there were two foreigners on the plane: one of the pilots, Indian national Bhavye Suneja, and an Italian citizen.

Friends and relatives gathered at the pilot’s family home in New Delhi to comfort his immediate family.

“His father is stunned and not in a condition to talk or do anything. Sister and mother have not come out. They are distressed,” said family friend Anil Gupta.

The Transport Ministry said the plane took off from Jakarta at about 6:20 a.m. and crashed just 13 minutes later. Data from FlightAware showed it had reached an altitude of only 5,200 feet (1,580 meters).

Boeing Co. said it was “deeply saddened” by the crash and was prepared to provide technical assistance to Indonesia’s crash probe.

The 737 Max 8 was leased from China Minsheng Investment Group Leasing Holdings Ltd., according to the official China News Service.

Malindo Air, a Malaysian subsidiary of Lion Air, was the first airline to begin using the 737 Max 8 last year. The Max 8 replaced the similar 800 in the Chicago-based plane maker’s product line.

Lion Air president-director Edward Sirait said the plane had a “technical problem” on its previous flight from Bali to Jakarta but it had been fully remedied. He didn’t know specifics of the problem when asked in a TV interview.

“Indeed there were reports about a technical problem, and the technical problem has been resolved in accordance with the procedures released by the plane manufacturer,” Sirait said. “I did not know exactly but let it be investigated by the authorities.”

The crash is the worst airline disaster in Indonesia since an AirAsia flight from Surabaya to Singapore plunged into the sea in December 2014, killing all 162 on board.

Indonesian airlines were barred in 2007 from flying to Europe because of safety concerns, though several were allowed to resume services in the following decade. The ban was completely lifted in June. The U.S. lifted a decadelong ban in 2016.

Lion Air, a discount carrier, is one Indonesia’s youngest and biggest airlines, flying to dozens of domestic and international destinations. Earlier this year it confirmed a deal to buy 50 new Boeing narrow-body aircraft worth an estimated $6.2 billion.

It has been expanding aggressively in Southeast Asia, a fast-growing region of more than 600 million people. In a record transaction, Lion Air signed a deal to buy 230 Boeing jets for $21.7 billion during a visit by then-President Barack Obama in November 2011.