Two Indonesian militants linked to a 2019 church blast in the Philippines have been shot dead by police, authorities said Wednesday, as officers arrested scores of pro-Islamic State radicals. 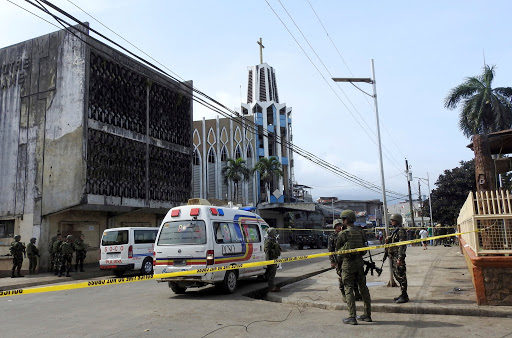 Two suspects were gunned down when they "resisted arrest" and attacked officers, police said, adding that a third suspect suffered gunshot injuries and was being treated in hospital.

Another 17 militants were detained.

Later Wednesday, police said the two dead suspects were involved in financing the Philippines' worst terror attack in years, which killed 21 and injured scores more in 2019.

"The two were involved in transferring money to the bombers of the church in Jolo, Philippines," national police spokesman Ahmad Ramadhan told reporters, without elaborating.

In early 2019, two explosions ripped through a Catholic church on the Philippines' Muslim-majority island of Jolo, killing worshippers at Sunday mass and security forces -- raising fears about growing links between militants in Southeast Asia.

The pair were later identified as an Indonesian militant and his wife.

The Jolo attack was carried out days after voters approved expanding Muslim self-rule in the south aimed at ending a decades-old rebellion for independence or autonomy for the sizeable Islamic minority of the mainly Catholic Philippines.

On Wednesday, police in Muslim-majority Indonesia said the two men shot by authorities were members of Jamaah Ansharut Daulah (JAD), a local terror network which has pledged allegiance to Islamic State and its violent ideology.

Members of JAD staged a wave of suicide bombings at churches in Indonesia's second-biggest city Surabaya in 2018, killing a dozen congregants.