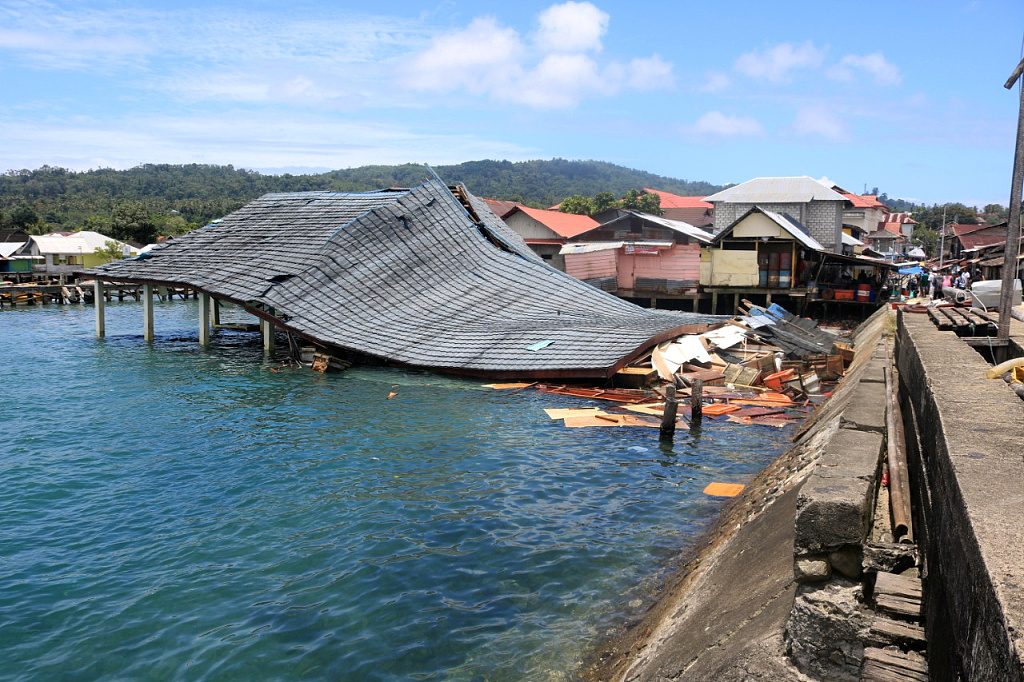 A damaged traditional market building is pictured following an earthquake in Ambon, Indonesia, September 26, 2019 in this photo taken by Antara Foto. (Photo: VCG)

The death toll from a powerful earthquake that rocked Indonesia's remote Maluku islands has risen to 23, the disaster agency said Friday, as more than 15,000 people were evacuated to shelters.

Terrified residents ran into the streets as buildings fell in around them with the 6.5-magnitude tremor sparking landslides that buried at least one victim on Thursday.

Among the confirmed dead was an infant, with many killed by falling debris in and around quake-struck Ambon city.

"The total number of people who died is 23," national disaster mitigation agency spokesman Agus Wibowo said in a statement.

More than 100 people were also injured and at least 15,000 people had to evacuate because their houses were damaged by the strong jolt, Wibowo said.

Hundreds of houses, offices, schools and public facilities have also been damaged in the disaster. Authorities have set up emergency tents and public kitchen for the evacuees in several districts.

The US Geological Survey said the quake struck about 37 kilometres (23 miles) northeast of Ambon in Maluku province at a depth of 29 kilometres.

The Southeast Asian archipelago is one of the most disaster-prone nations on Earth.

It experiences frequent seismic and volcanic activity due to its position on the Pacific "Ring of Fire", where tectonic plates collide.

Last year, a 7.5-magnitude quake and a subsequent tsunami in Palu on Sulawesi island left more than 4,300 people dead or missing.

Nearly 60,000 people are still living in makeshift accommodation nearly a year after the double disaster, the Red Cross said this week.

In 2004, a devastating 9.1-magnitude earthquake struck off the coast of Sumatra and triggered a tsunami that killed 220,000 throughout the region, including around 170,000 in Indonesia.