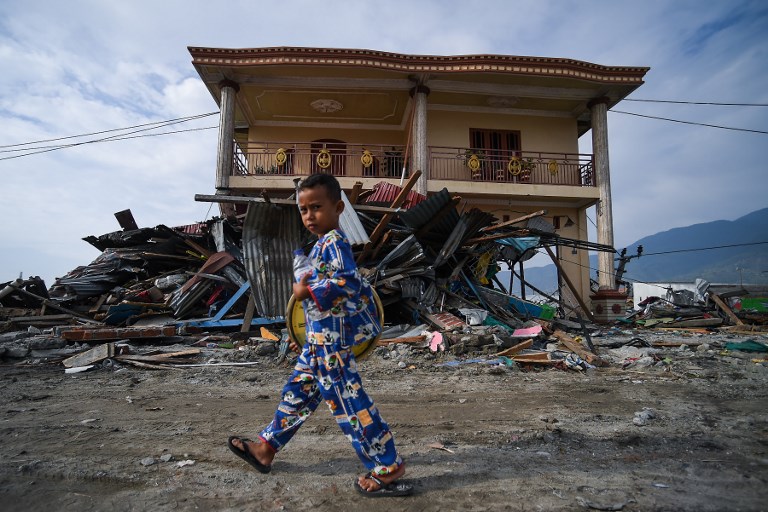 A boy walks in front of tsunami debris piled beside a building that still remains standing in Palu, Indonesia on October 4, 2018. (Photo: AFP)

Many children have been separated from their families and are "in shock and traumatised" following Indonesia's devastating quake-tsunami, aid workers said Thursday, as much-needed supplies trickled in to shattered communities.

A total of 1,411 people have been confirmed dead and over 2,500 injured after the monster earthquake struck Friday sending destructive waves barrelling into Sulawesi island.

The disaster reduced buildings in the seaside city of Palu to rubble but, with transport links badly affected, aid has been slow to arrive and looting has broken out.

While rescuers continue to comb through the ruins of destroyed buildings, hope is fading that anyone will be found alive under the rubble. Authorities say over 100 people are still unaccounted for.

As officials scrambled to deal with survivors' basic needs and foreign aid groups rushed to reach the disaster zone, attention focused on the huge number of children left orphaned or separated from their families.

Save the Children said many youngsters were sleeping on the streets among ruins in Palu, and authorities urgently needed to identify and reunite them with their relatives.

"It's hard to imagine a more frightening situation for a child," said Zubedy Koteng, the group's child protection adviser, who is in the city.

"Many children are in shock and traumatised, alone and afraid. Young children searching for surviving relatives will have witnessed and lived through horrific experiences which no child should ever have to see."

The Indonesian government initially refused to accept international help, insisting its own military could handle the response, but as the scale of the disaster became clear President Joko Widodo reluctantly agreed to allow in foreign aid groups and governments.

Nevertheless, officials have said that in reality it is still difficult to get anything to survivors battling thirst and hunger.

Palu airport -- which was only accepting military flights in the early stages of the disaster -- opened to commercial services Thursday but only a limited number, with aid workers given priority.

"Aid is coming in from different sources, such as local governments from across Sulawesi as well as state-owned enterprises," he said.

The Red Cross said that it was sending three ships loaded with supplies, including field kitchens, tents, body bags and mosquito nets, while governments from Singapore to Britain have pledged help.

There have been repeated instances of looting, and reports that trucks carrying supplies were ransacked en route to Palu, a city of about 350,000.

Authorities initially turned a blind eye but have now taken a tougher stance, with police rounding up dozens of suspected looters and the military warning that soldiers will fire on anyone caught stealing.

Widodo, who faces re-election next year, has said the military and police are in full control, insisting that "there is no such thing as looting".

Rescuers seeking survivors are focusing on half a dozen key sites around Palu -- the Hotel Roa-Roa where scores are still believed buried, a shopping mall, a restaurant and the Balaroa area where the sheer force of the quake turned the earth temporarily to mush.

Authorities have set a tentative deadline of Friday to find anyone still trapped under rubble, at which point the chances of finding anyone alive will dwindle to almost zero.

There have been small signs of things getting back to normal. Power has returned to parts of Palu, phone networks are back up and running and even some markets are open for business.

But for most, daily life has changed beyond all recognition. Palu residents waited in line for water or cash being brought in via armed police convoy while queues to get a few litres of petrol lasted more than 24 hours in some places.