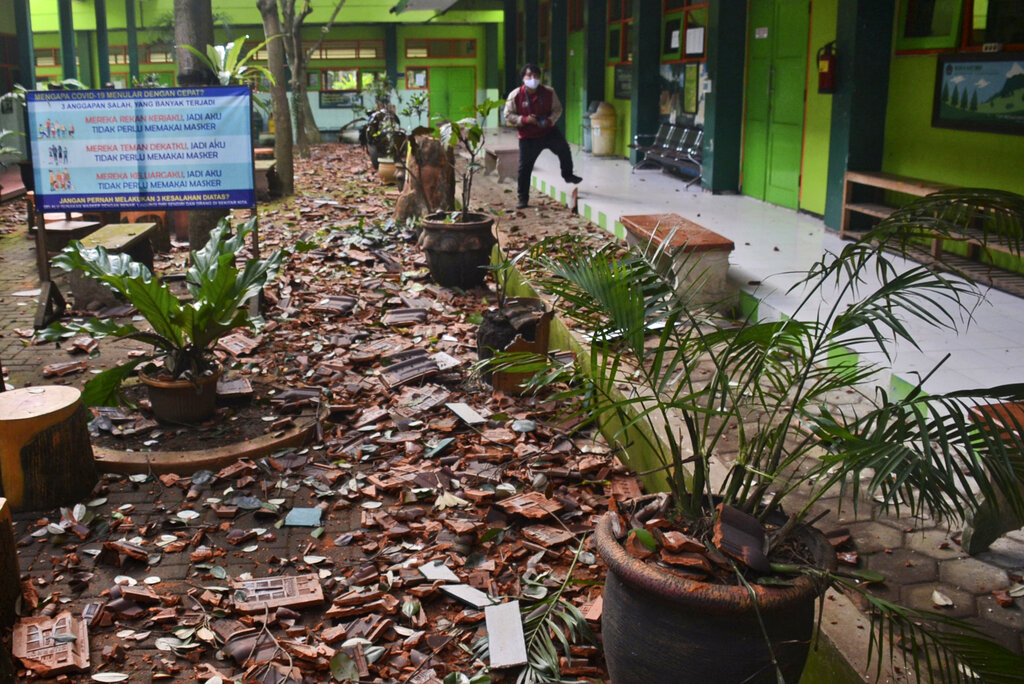 Pieces of roof tiles and other debris litter the ground at a school following an earthquake in Malang, East Java, Indonesia, Saturday, April 10, 2021. (Photo: AP)

A strong earthquake killed at least seven people, injured 12 others and damaged more than 300 buildings on Indonesia’s main island of Java and shook the tourist hotspot of Bali, officials said Saturday. No tsunami warnings were posted.

The U.S. Geological Survey said the magnitude 6.0 quake struck off the island's southern coast at 2:00 p.m. local time (0700 GMT). It was centered 45 kilometers (28 miles) south of Sumberpucung town of Malang District in East Java province, at a depth of 82 kilometers (51 miles).

Rahmat Triyono, the head of Indonesia’s earthquake and tsunami center, said in a statement the undersea tremblor did not have the potential to cause a tsunami. Still, he urged people to stay away from slopes of soil or rocks that have the potential for landslides.

This was the second deadly disaster to hit Indonesia this week, after a severe downpour on Sunday triggered by Tropical Cyclone Seroja killed at least 174 people and left 48 still missing while damaging thousands of houses. Some victims were buried in either mudslides or solidified lava from a volcanic eruption in November, while others were swept away by flash flooding.

He said dozens of homes were damaged across the district, and rescuers had retrieved two bodies from under the rubble in Kali Uling village. Two people were also confirmed killed in an area bordering Lumajang and Malang districts, while one person found dead under rubble in Malang.

Indonesia’s search and rescue agency released videos and photos of damaged houses and buildings, including a ceiling at a hospital in Blitar, a city neighboring Malang. Authorities were still collecting information about the full scale of casualties and damage in the affected areas.

Indonesia, a vast archipelago of 270 million people, is frequently struck by earthquakes, volcanic eruptions and tsunamis because of its location on the “Ring of Fire,” an arc of volcanoes and fault lines in the Pacific Basin.

In January, a magnitude 6.2 earthquake killed at least 105 people and injured nearly 6,500, while more than 92,000 displaced, after striking Mamuju and Majene districts in West Sulawesi province.