Indonesia's president said in an interview that he wants to see the speedy construction of a giant sea wall around Jakarta to prevent the low-lying capital from sinking under the sea, lending renewed backing and a sense of urgency to a slow-moving and politically contested mega project. 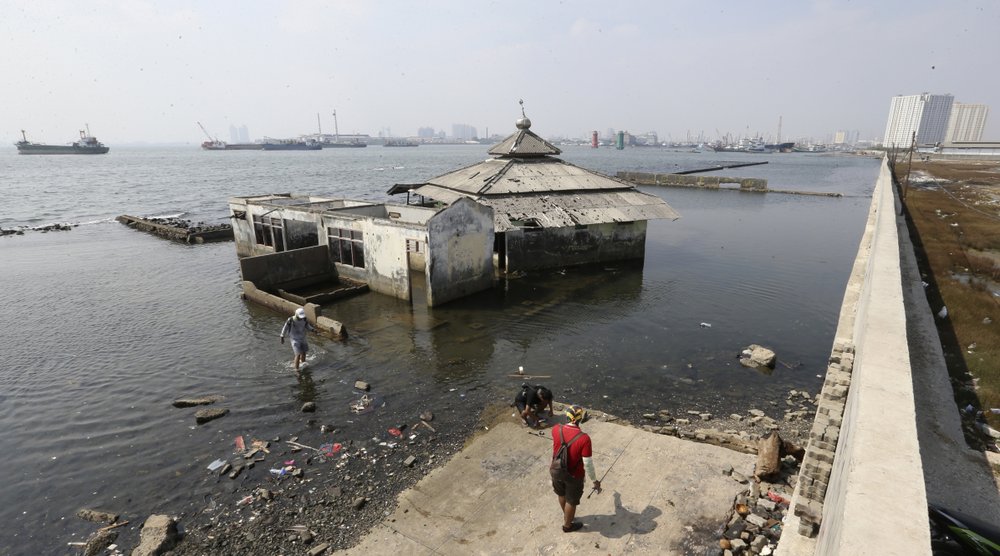 People walk near a giant sea wall which is used as a barrier to prevent sea water from flowing into land and cause flooding in Jakarta, Indonesia, Saturday, July 27, 2019. (Photo: AP)

President Joko Widodo and his government are up against a tight timetable, including a forecast by experts that at the current rate, one-third of Jakarta could be submerged by 2050.

The existential crisis facing the city is the culmination of decades of unfettered development, almost nonexistent urban planning and misrule by city politicians who have served private interests over those of the public.

In this area, the swampy ground has been sinking at an average of about 10 centimeters (4 inches) a year. Rising sea levels from a heated-up planet will compound the problem in decades to come.

Widodo told The Associated Press on Friday that it's time to move ahead with the sea wall, a project the government first began to consider a decade ago. "This huge project will need to be done quickly to prevent Jakarta from sinking under the sea," he said in the interview at a humble restaurant serving spicy Indonesian dishes.

The president said he's determined to push through key projects and reforms, even if potentially unpopular, noting that he'll be less constrained by domestic politics in his second and final five-year term. Widodo was reelected earlier this year.

He also addressed other ambitious plans for Jakarta, a congested, polluted and sprawling metropolis of 10 million that swells to three times that number when counting those living in the larger metropolitan area.

Widodo reiterated that wants to build a new capital, suggesting it should be outside Indonesia's main island of Java, where 57 percent of the country's nearly 270 million people are concentrated.

"We want to separate the capital, the center of government and Jakarta as a business and economic center," he said. "We don't want all the money existing only in Java. We want it to be outside Java as well."

Jakarta's vulnerability to flooding and earthquakes is also a factor, Widodo said. "We need to make sure our capital is safe from disasters," he said, without naming the location for the new capital.

The threats facing Jakarta are most visible in Muara Baru, a waterfront slum in the northwest of the city.

A sea wall along the shore is meant to protect the area's makeshift shacks against the waters of the Java Sea, but the concrete barrier — raised and reinforced after a major flood more than a decade ago — has developed cracks.

A steady trickle of seawater leaks through it, covering the street running alongside the wall with a shallow brackish brew. A half-submerged mosque on the bay side of the wall serves as a stark reminder of what could be in store for the entire area. Two women in the neighborhood said their homes are flooded frequently.

Jakarta has been described as one of the world's fastest sinking cities — a result of geographic misfortune and mismanagement. The city sits on swampy ground, with 13 heavily polluted rivers running through it. The main cause for the sinking is the over-extraction of groundwater. The weight of taller buildings being constructed in recent years further compresses the ground.

Heri Andreas, an earth scientist at Indonesia's Bandung Institute of Technology, said that in some parts of northern Jakarta, the ground is already 2 to 4 meters (7 to 13 feet) below sea level and is sinking by as much as 20 centimeters (8 inches) a year.

"Jakarta keeps sinking," said Andreas, an expert in geodesy, or the measuring of the shape of the earth. "If subsidence continues at the same rate, 95 percent of northern Jakarta will be underwater by 2050."

He said water would cover about one-third of the city.

Andreas said it took time for his alarming forecasts to be taken seriously by Indonesian government officials, but that planning for a giant sea wall encircling Jakarta Bay began about a decade ago.

The $42 billion project envisions three stages, starting with strengthening 30 kilometers (18 miles) of existing coastal dams and creating 17 artificial islands. This would be followed by building giant sea walls on the western and eastern sides of the bay.

However, implementation has been slow amid political arguments over the cost of the project and possible harm to the local fishing industry.

Andreas, who is occasionally consulted by the authorities and met with government officials last week, said he expects a scaled-back version of the giant sea wall to be built for less than the initial budget.

In this scenario, a 20-kilometer-long (12-mile-long) wall would enclose part of the bay to protect the most vulnerable area, rather than a loop that was intended to be three times as long. This would buy time for the government to deal with the other areas later.

Local fishermen view the mega project with suspicion, fearing it will rob them of their livelihood.

In Muara Angke, a small fishing port in northern Jakarta, 63-year-old Pandi dismissed the warnings by scientists, arguing that occasional flooding is part of life on the waterfront.

Pandi, who uses a single name, catches mussels for a living, in an operation that provides a livelihood for about 30 people.

On Saturday, several men scooped their catch from a small boat into large vats they placed on open fires nearby. Once the mussels were cooked, the men dumped them onto the ground, where women removed the shells, preparing the mussels for sale.

Pandi said land reclamation already underway in the bay forced him to sail farther away from shore in search of mussels. He said he fears a giant sea wall could drive him out of business for good.

"If we can't work, we will suffer for a long time," he said. "Sinking" below water, he said, "is just part of the risk."