JAKARTA, Oct. 17 (Xinhua) - Indonesians displaced by quakes and an ensuing tsunami in Central Sulawesi province needed thousands of tents for shelter as the construction of temporary settlements was underway, a senior official said on Wednesday. 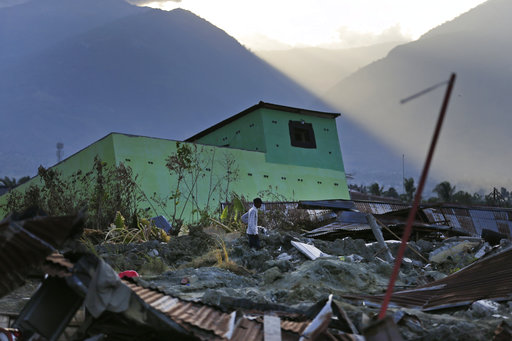 A man surveys the damage suffered byPetobo neighborhood which was wiped out by earthquake-triggered liquefaction as the sun set in Palu, Central Sulawesi, Indonesia, Sunday, Oct. 7, 2018. (Photo: AP)

Over 18,000 tents were needed since the strong quakes of 6.0, 7.4 and 6.1 magnitude that triggered a tsunami devastated Palu, the provincial capital, and adjacent districts of Donggala and Sigi on Sept. 28, forcing more than 87,000 people to flee homes, Bernadus Wisnu Widjaja from the national disaster management agency said in Palu.

By far, a total of 5,000 tents have been transported to the disaster areas by humanitarian organizations and as many as 1,300 others by the Red Cross, he added.

A total of 800 big tents were also needed to accommodate students in the affected areas, he was quoted by Antara news agency as saying.

The UN children's agency Unicef has donated 200 tents to damaged local schools, according to the official.

The massive tsunami triggered by the quakes destroyed a total of 67,310 houses and a huge amount infrastructure facility in the central province.

Indonesia is prone to quake as it lies on a vulnerable quake-affected area of so called "the Pacific Ring of Fire."