Indonesia's transportation safety board denied on Thursday that it leaked details from its probe into the crash of a Lion Air flight in October.

The chairman of the National Transportation Safety Committee, Soerjanto Tjahjono, disputed reports describing conversations as the pilots panicked just before their Boeing 737 Max 8 plunged into the Java Sea shortly after takeoff on Oct. 29. 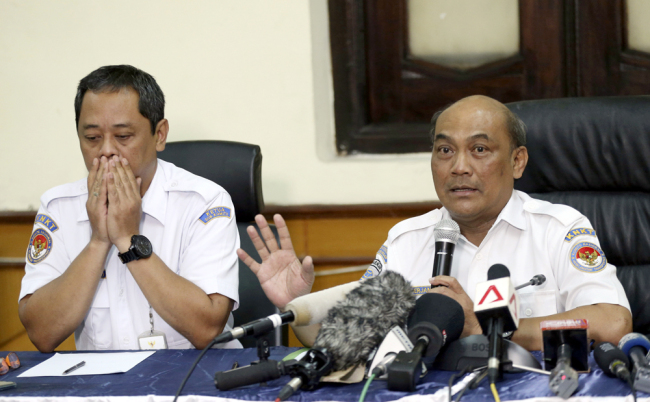 Interest in the investigation into the crash, which killed all 189 people aboard, has intensified following the crash of another Max 8 in Ethiopia earlier this month that killed 157 people.

Tjahjono told reporters that data from the cockpit voice recorder did not match reports detailing how the pilot and co-pilot struggled to regain control of the plane as an automated system pushed its nose downward.

"The contents of the reports were just opinions that someone or some people made to look as if they came from the CVR," he said.

Only Indonesia's NTSC has the records from the flight, he said. "Everything is stored on our server, which is standalone, not connected to the internet or anything, and we can only access it when we are going to evaluate it," Tjahjono said.

Indonesian investigators say they are still analyzing conversations from the Oct. 29 flight recorded by the cockpit voice recorder, which was only recovered from the seabed in January.

Nucahyo Utomo, the official in charge of the investigation into the crash, said the agency was sharing information with U.S. aviation regulators but that there was a recognition on both sides that laws in each country differ and that Indonesia does not publish such information.

"So we want to say that our CVR data was not leaked, because the content reported was not the same as what is in the CVR," he said.

Utomo did confirm that that there was panic in the cockpit just before the aircraft crashed.

"I can't say what they shouted, what caused them to panic. I just said that at the end it looks like the pilots could no longer save the flight and they began to panic," he said. 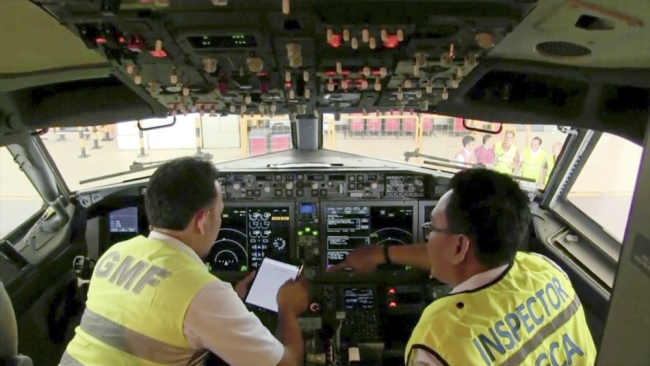 The image from video taken on March 12, 2019 shows officials make inspection inside the cockpit of a Boeing 737 Max 8 aircraft is in hangar at Garuda Maintenance Facility at Soekarno Hatta airport, Jakarta. (Photo: AP)

The Lion Air plane had problems on several flights before it crashed, with terrifying episodes of loss of altitude possibly related to an automated anti-stall system.

Tjahjono did confirm that a third pilot was in the cockpit of the aircraft that crashed when it encountered similar difficulties a day before its final, fatal flight.

The third pilot, who has not been identified, was qualified to fly Max 8s. He was off duty and traveling aboard the Oct. 28 flight from Bali's Denpasar airport to Jakarta. Some reports, citing unnamed sources, said the extra pilot advised the two in charge of the flight on how to stop the plane from automatically pointing its nose downward, in line with Boeing's operating instructions.

It's unclear if the pilots fully shared their difficulties handling the plane with safety regulators, the airline or the pilots who perished in the Oct. 29 flight.

An earlier report issued by Indonesian aviation regulators describes technical problems aboard the plane's penultimate flight but does not mention that a third person was in the cockpit along with the pilot and co-pilot.

A preliminary report from Tjahjono's agency issued in December stopped short of declaring a probable cause of the Oct. 29 crash.

Tjahjono said NTSC investigators have visited Boeing to carry out a reconstruction of the crashed flight and the next-to-last flight. The agency will publish results of its investigation in August or September, he said.

Boeing 737 Max 8 aircraft have been grounded following the two crashes.