Indonesia wary of 'breaking the fast' migrants amid travel ban 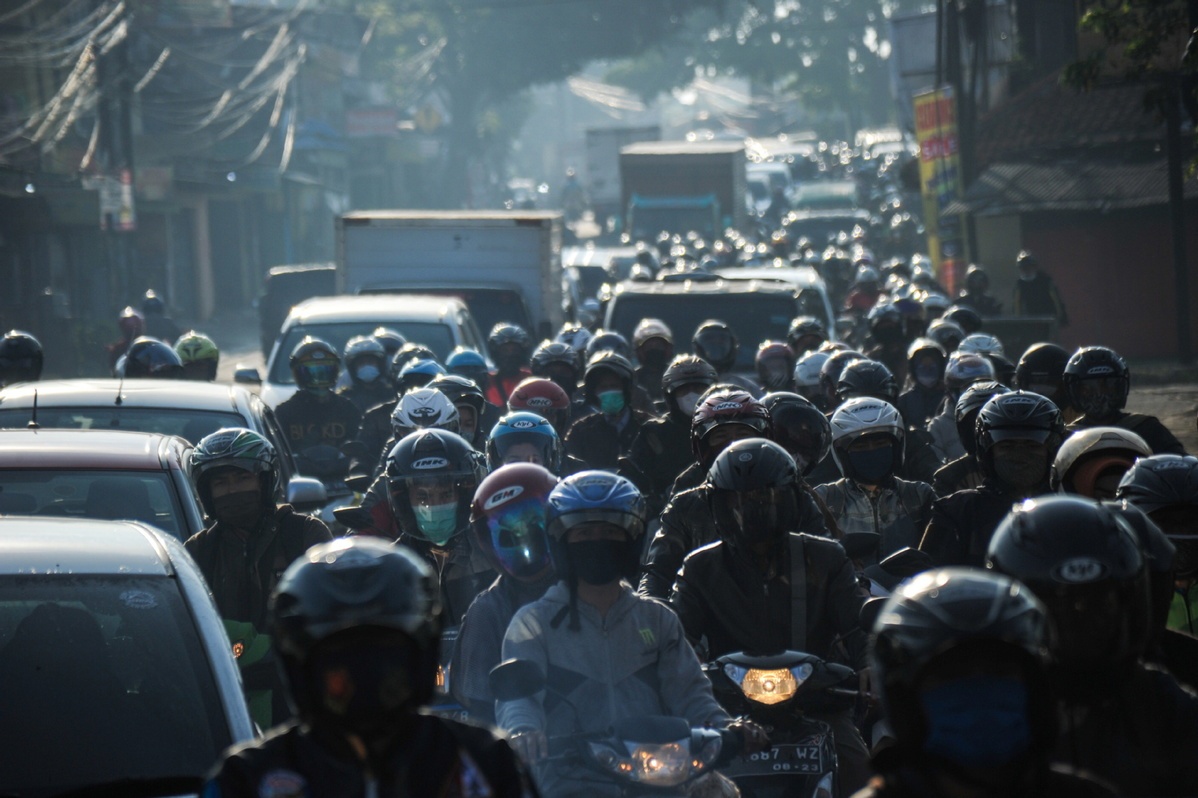 People ride motorcycles on the first day of a national travel ban as Indonesia halts sea, land, air, and rail travel from May 6 to 17 for the Idul Fitri celebrations in an effort to prevent a large-scale transmission of the coronavirus disease (COVID-19) pandemic in Bandung, West Java Province, Indonesia May 6, 2021. (Photo: Agencies)

Indonesia's celebration of this year's Ramadan and the Idul Fitri holiday that falls on May 15 have sparked fears that the events may have a negative effect on the country's achievements in fighting the pandemic, despite a travel ban that went into effect on May 6.

Traditionally, the Indonesian way to mark the festival of Idul Fitri, or breaking the fast, is "mudik" or returning home, which would constitute one of the world's biggest migrations in this country, the largest Islamic nation on Earth, with 270 million people on about 2,200 islands.

So far the authorities have managed to flatten the curve of coronavirus infections, thanks to restrictive policies and the rollout of COVID-19 vaccinations.

President Joko Widodo and other officials have repeatedly reminded the nation over the past weeks about the possibility of a COVID-19 tsunami hitting Indonesia like that in India if people insist on going to their hometowns to celebrate Idul Fitri and neglect anti-coronavirus restrictions.

The government has issued special rules to ban Idul Fitri holiday travel between May 6-17, and restrict people's movements on April 22-May 5 and May 18-24. Only people with special reasons supported by specially issued documents will be allowed to leave. Special rules to restrict Idul Fitri prayer gatherings are introduced at mosques and related parades.

However, many self-employed workers had already left for their hometowns before the ban. Others heading home have also tried to evade travel ban by secondary road networks and even along the so-called "mouse" pathways.

On the first day of the travel ban on May 6, long queues of private cars were seen at toll road gates outside Jakarta, making traffic officers busy at checkpoints, turning back those vehicles with drivers and passengers failing to produce official "special permission" documents.

It is estimated that 18.9 million people would still insist on going home for this year's Idul Fitri. "The number is still quite big," the president told a specially held virtual national conference with regional administrators earlier.

The majority of those migrants are from large cities on the islands of Java and Sumatra.

At least 167,000 military and police members and others from related offices have been deployed on sites like highway checkpoints, rest areas, arrival gates as well the so-called "mouse" pathways.

"We are making all necessary preparations to follow the central government's instruction. We are still holding meetings with other district heads and with village heads," said a Bantul district official in the central Java province of Yogyakarta.

Since the country implemented micro-scale public activity restrictions from Feb 9, a downtrend curve of infections was reported up to early May, according to data at the ministry of health.

On a larger scale, however, accumulated active cases had continued to rise since March of last year when first infections were detected, with analysts suspecting undiscovered and under-recorded infections.

President Widodo has asked the Indonesian people not to "feel complacent" in the downtrend number of cases over the past several months. He pointed to India's negligence after it experienced an astonishingly drastic drop in its COVID-19 cases, which has led the country to a catastrophe.

Fear of case resurgence has further increased after the country recently detected more transmissible variants which had been first found in India and South Africa.

On May 3, five more provinces implemented micro-scale restrictions, bringing the total engaged to 25 among the country's 34 provinces.

So far, the country has received in several batches a total of 73.9 million doses of vaccines, including 65.5 million doses of the Sinovac product. The remaining are Sinopharm and Astrazeneca vaccines, with others like Russia's Sputnik in the pipeline.

Already inoculated so far were mostly priority groups of people like health workers, public service workers, military and security personnel, community leaders as well as citizens aged 60 years and above.

In Agats regency in Papua, the country's most eastern province, most such people have gotten their second shot.

"Very soon, people from villages will get a first shot. Registration is conducted off-line and online," Catholic pastor Lucius Joko said. The local Catholic Church cooperates closely with the Agats health office to persuade locals to get vaccinated.

In Kei Kecil, an island with 33,000 inhabitants in southeastern Moluccas, people are quite aware of the coronavirus and vaccinations. Irma Hutaumi, a social worker from a religious order, said some locals had initially refused inoculation after a suspected COVID-19 patient died at hospital, but the death was later found to be due to other factors.