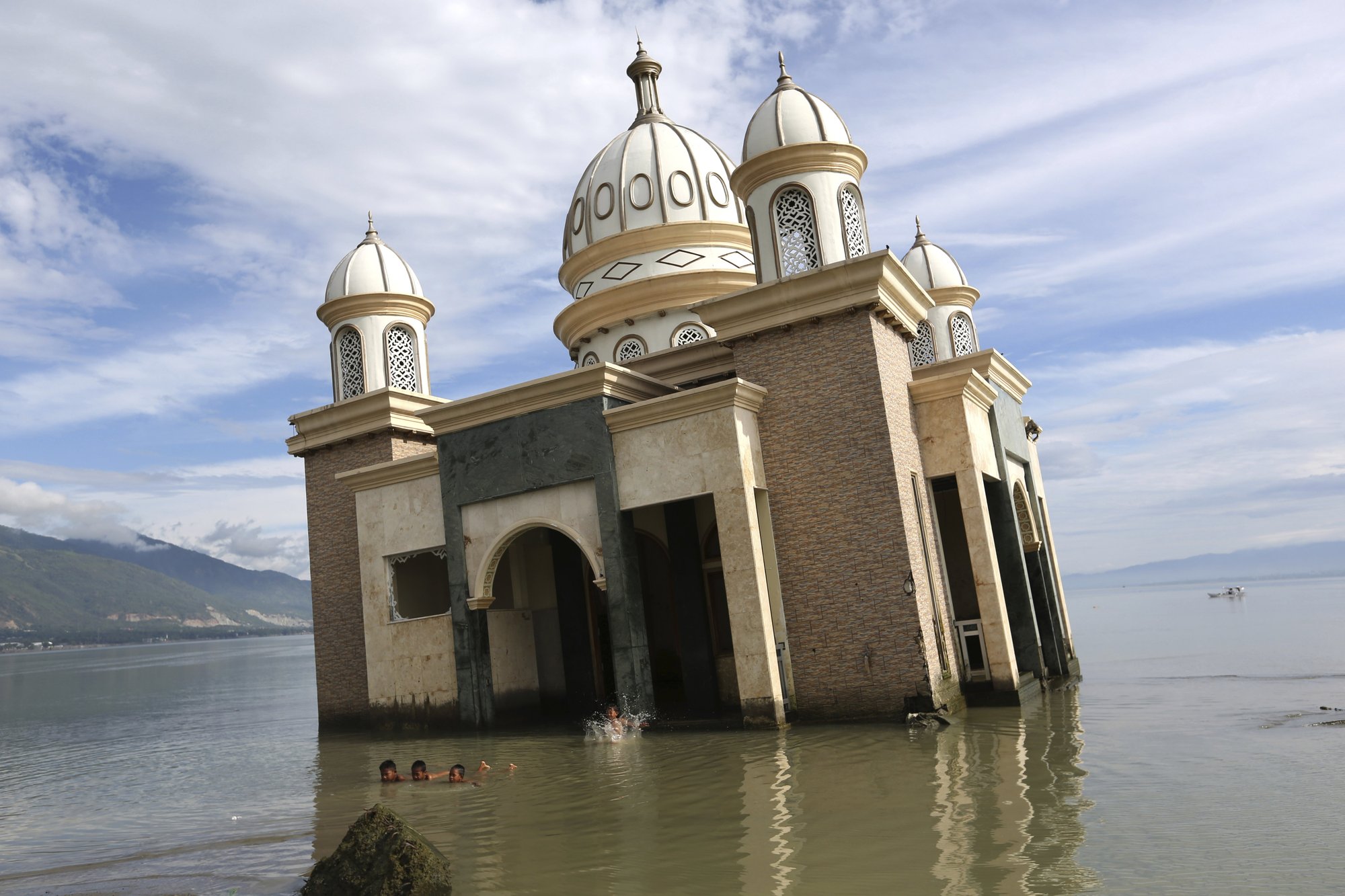 Children play in the water on a beach near a mosque that collapsed during an earthquake in Septtember. the earthquake is seen in the background in Palu, Central Sulawesi, Indonesia, on April 3, 2019. (Photo: AP)

Six months after Palu was ripped apart by an earthquake, tsunami and liquefying soil that sucked neighborhoods into the earth and killed thousands, a second crisis is looming as recovery efforts stumble and a city that feels ignored begs for humanitarian assistance.

Thousands of people in this city on Indonesia’s Sulawesi island are still living in sweltering tent cities, while construction of new permanent homes has yet to start and almost a third of temporary housing is unoccupied after aid groups and authorities failed to connect the units to essential utilities.

President Joko Widodo, who is seeking a second term in elections this week, and his deputy promised that financial assistance to those whose homes were destroyed or whose loved ones were killed would be rapidly distributed. But not a cent has been paid out.

“It’s like we’re forgotten,” said Ade Zahra, a mother of eight living in a tent city who says it’s a miracle her family survived when the quake turned their village to mud and engulfed their home.

“We’ve received no more assistance in the past two months, not only the government, but also humanitarian groups and volunteers who used to provide a lot,” she said.

The city’s struggle to recover highlights a broader problem of neglect often suffered by remote regions in Indonesia, a sprawling archipelago home to hundreds of ethnic groups. Far from the center of economic, political and cultural power in populous Java, the region around Palu has a history of sectarian conflict and perceived indifference to its plight could embolden hard-liners.

City officials, meanwhile, are worried frustration among the displaced has reached a breaking point.

As anger among the refugees simmers, Widodo is focused on securing his reelection. Sulawesi mostly voted for Widodo in 2014, but he risks losing ground there this time. That could be crucial if the race is tighter than polls, which are predicting a strong Widodo victory.

The Sept. 28 earthquake spawned a large localized tsunami that wiped out coastal areas, while liquefaction caused by the shaking turned entire neighborhoods into rivers of sludge. The disaster killed more than 4,400 people, making it the world’s deadliest seismic event in 2018.

The central government, at the time still grappling with the aftermath of deadly earthquakes on Lombok Island, appealed for international aid but didn’t declare a national disaster, which would’ve opened the door wider to foreign assistance. It prohibited international aid organizations from operating on the ground.

Though the tragedy is fading from the national consciousness, large parts of Palu look like they were struck only yesterday, a daily reminder to residents of the horrors they lived through.

About 90% of roads have been repaired, according to Palu’s mayor, but the shoreline is littered in debris and hollowed out buildings that lean precariously.

Waves wash inside Apung Palu Mosque, which once sat majestically on pillars in Palu Bay. People looking for valuables pick through a vast jumble of personal belongings and house debris, all that’s left of once thriving communities.

In Sigi district bordering Palu, several dozen white tents emblazoned with the U.N. refugee agency’s logo are home to hundreds of evacuees, who look with envy and anger at temporary housing across the road — some of it occupied, some empty and some still unfinished.

During the day, the tents are blazing hot and at night refugees, who include a man incapacitated by a stroke and a boy with cerebral palsy, shiver.

Frustrated residents recall that not long after the disaster Vice President Jusuf Kalla visited and promised they’d soon get money to help rebuild their lives. Instead things seem to be getting worse.

They have clean drinking water, but a mobile kitchen provided by an aid group closed due to lack of donations. Members of some families have jobs, but others have almost nothing, their former livelihoods gone. Some beg for money.

Zahra, the mother of eight, said she hopes the government finally fulfills its promise.

Officially, about 173,000 people were displaced by the disaster and about 20,000 are still living in tents that Palu’s mayor says were designed to last three months. The actual number without stable housing is much higher.

At a block of eight buildings built by a charitable foundation run by Kalla’s business empire, a banner announced they were handed over to the city on Feb. 14. All sit empty and unconnected to utilities, the only sign of life a few cows grazing between them.

Temporary housing built nearby by another organization is occupied, some by residents of a neighborhood wiped out by liquefaction.

Umira, who uses a single name, wept as she recalled the ordeal her family has endured since the night they fled a sea of moving trees and houses. Eight of her relatives were killed, including her grandson.

They’ve gone from sheltering in a sports stadium to fashioning their own makeshift lodging in the ruins of a house to finally being assigned to a room in a temporary housing unit.

“We all cried with happiness,” she said of the moment two months ago when they learned they would have housing. “Even my husband cried and hugged the wall of our new home.”

The family still gets aid, Umira said, such as staple foods and cooking oil, though it’s distributed without any predictable schedule.

When the aid runs out they rely on income from running an on-call motorcycle taxi service.

Presley Tampubolon, the head of Palu’s disaster agency who oversees temporary housing, said the need for accommodation has been greater than anticipated.

For every house destroyed or damaged, there would often be several generations of a family living in it. He said it would be “inhuman” to expect such families to fit into the 3-meter-by-4-meter (10-foot-by-13-foot) rooms that have been built.

He said the government and aid groups have built temporary buildings with 5,300 total rooms that can accommodate nearly 41,000 people. But about 1,600 of those rooms are empty because they weren’t connected to water, electricity or sanitation, he said.

Hidayat, the mayor of Palu who uses a single name, said the central government has stopped building temporary homes despite the need and construction of permanent dwellings hasn’t started.

Compounding the problem is that the central government’s social affairs and public works ministries haven’t released “mourning allowances” and funds for people to build new homes.

He said he’s worried anger will soon boil over.

The social affairs ministry’s director of social protection and disaster victims, Margo Wiyono, said the ministry has verified 1,906 of the 4,400 names of heirs who would be entitled to mourning allowances and has proposed the finance ministry pay them.

He said they were still investigating the rest.

“We don’t want the allowances worth 15 million rupiah ($1,050) per heir to fall into the hands of irresponsible people,” he said.

The budget director-general at the finance ministry, Askolani, said it’s in the process of approving money to pay the allowances. He said releasing funds for new housing is contingent on several factors, including reviewing local government data and identifying areas for new settlements that are safe from liquefaction.

Hidayat isn’t waiting. He said the Tzu Chi Buddhist Foundation has agreed to build 3,000 new homes in the Palu area, but he is urging organizations and local governments from around the country to build more.

“Our regional capabilities are very limited,” he said. “As the mayor, I’m begging for help to many humanitarian groups and institutions.”