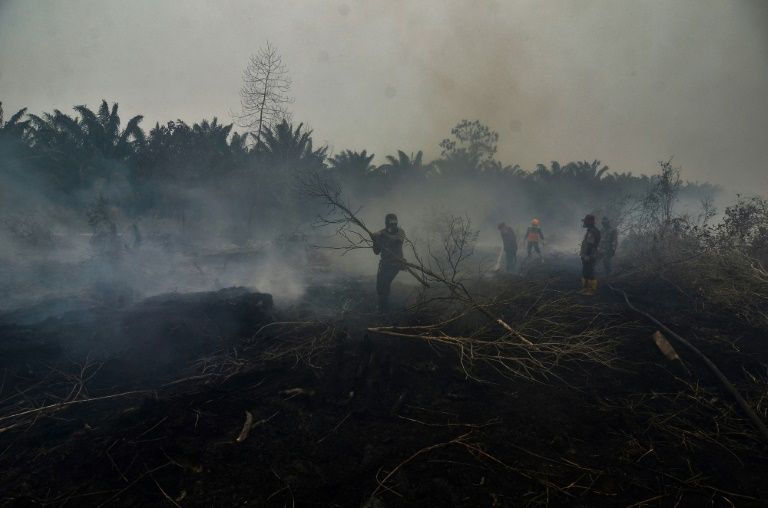 From the start of August to September 18, the fires emitted about 360 megatonnes of carbon dioxide (AFP Photo/Wahyudi)

The fires have been spewing toxic haze over Southeast Asia in recent weeks, closing schools and airports, with people rushing to buy face masks and seek medical treatment for respiratory ailments.

Jakarta has deployed tens of thousands of personnel and water-bombing aircraft to tackle the slash-and-burn blazes set to clear agricultural land. The fires are an annual problem but this year are the worst since 2015 due to dry weather.

Almost 10 million people under 18 -- about a quarter below five -- live in the areas worst affected by fires on Indonesia's Sumatra island and the country's part of Borneo island, the UN children's agency UNICEF said.

Small children are especially vulnerable due to undeveloped immune systems while babies born to mothers exposed to pollution during pregnancy may have low birth weights and be delivered early, they said.

"Poor air quality is a severe and growing challenge for Indonesia," said Debora Comini from UNICEF.

"Every year, millions of children are breathing toxic air that threatens their health and causes them to miss school -- resulting in lifelong physical and cognitive damage."

Thousands of schools have been closed across Indonesia due to poor air quality, with millions of youngsters missing classes.

Schools were forced to shut across Malaysia last week as dense smog from its neighbour clouded the skies, while Singapore was also shrouded in haze during the weekend's Formula One motor race.

Air quality had however improved in Malaysia and Singapore Tuesday, and the skies were clearer.

There have been a series of wildfire outbreaks worldwide, from the Amazon to Australia, and scientists are increasingly worried about their impact on global warming.

The Copernicus Atmosphere Monitoring Service, part of the EU's Earth observation programme, said this year's Indonesian fires were releasing almost as much carbon dioxide into the atmosphere as blazes in 2015, the worst for two decades.

From the start of August to September 18, the fires emitted about 360 megatonnes of the greenhouse gas, compared to 400 megatonnes over the same period four years ago, the service said.

One megatonne is equivalent to one million tonnes.

At the peak of the 2015 crisis, the fires were emitting more greenhouse gases into the atmosphere each day than all US economic activity, according to environmental watchdog the World Resources Institute.