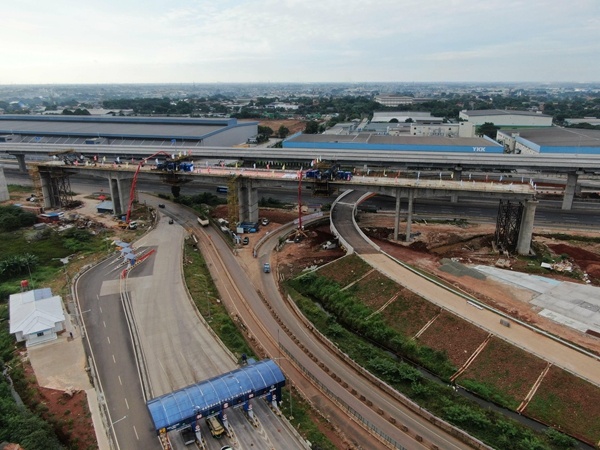 The first multi-span rigid frame continuous beam for the No 2 Bridge of Indonesia's Jakarta-Bandung High Speed Railway was successfully closed in May.[Photo provided to China Daily]

The development of the China-built Jakarta-Bandung high-speed railway (HSR) project is continuing to advance amid the COVID-19 pandemic in Indonesia following changes in safety and health procedures at the construction sites.

At all the HSR's project sites, everybody, particularly workers, must go through temperature checks regularly before entering the site. Polymerase chain reaction (PCR) tests are also being conducted on-site for the virus.

Hilal Riselianto, a construction safety officer at the Tunnel No 10 located in Padalarang, a sub-district in the West Bandung district, has not returned to his home in West Java's city of Sukabumi since the COVID-19 outbreak in Indonesia in early March.

At least 200 workers on the Tunnel No 10 project have been staying in dormitories after work to protect themselves from being infected by the virus.

"Workers who are not feeling well will immediately be taken for a health check," Riselianto told Xinhua in Padalarang.

"As for newly recruited workers, they are required to go through rapid tests and to self-quarantine for 14 days before starting to work," he added.

Riselianto, who conducts a toolbox talk, an informal meeting focusing on safety topics every morning, never forgets to remind all workers of social distancing measures.

"Workers must keep a distance of at least one meter apart," he said, adding that they must also wash their hands with sanitizers before and after their shift.

He added that every day each worker on the Tunnel No 10 project is provided with two masks and other materials to ensure their health and safety at work.

The Tunnel No 10 project is a single 1,230-meter long tunnel with double lanes undertaken by the China Railway Engineering Corporation (CREC).

Riselianto said construction has been making good progress despite the tighter health and safety protocols.

"The construction process is going smoothly despite COVID-19. The work schedule has not been disrupted, while workers are being kept healthy," he said.

Latest data released by the Indonesian government showed the total cases of confirmed COVID-19 in the world's fourth most populous country increased to more than 70,000 on Thursday. The coronavirus has claimed some 3,400 lives across the country. 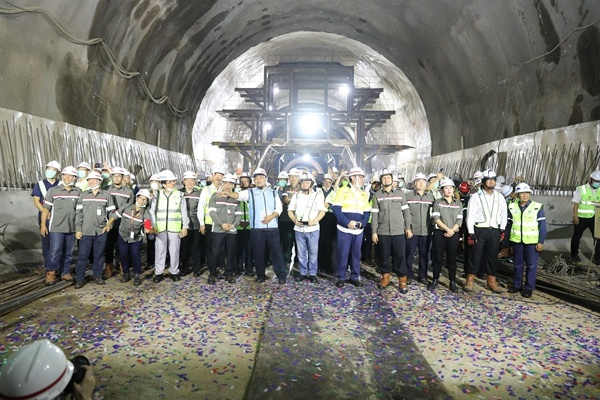 Under the new health and safety measures implemented at the Jakarta-Bandung HSR project, the High-Speed Railway Contractor Consortium has completed several projects, including the 422-meter Tunnel No 5 in March.[Photo provided to China Daily]

West Java recently announced that the province decided not to extend its large-scale social restrictions (PSBB), also known as a partial lockdown policy, after seeing the virus' basic reproduction rate (R0) remain under 1 over the past six weeks.

The province's governor Ridwan Kamil said authorities have been focusing more on conducting tests in areas prone to COVID-19 outbreaks.

Meanwhile, the Jakarta administration is still implementing "transitional" PSBB that serves as an early chapter of Jakarta's new normal, in which the province's governor Anies Baswedan said would only be applied to strategic sectors with manageable risks.

Under the new health and safety measures implemented at the Jakarta-Bandung HSR project, the High-Speed Railway Contractor Consortium (HSRCC) has completed several projects during the first half of 2020.

They include the 735-meter-long Tunnel No 3 bored through on April 26, as well as the 422-meter Tunnel No 5 with its drilling completed on March 12.

"The construction projects have been advanced in a safe and orderly manner, reflecting the high standards and good image of the Jakarta-Bandung High Speed Railway construction," HSRCC's project director Xiao Songxin told Xinhua.

The Jakarta-Bandung HSR has a total length of 142.3 km, comprising 13 tunnels, and trains will run at a designed speed of 350 km per hour. It is the first of its kind in Indonesia as well as in Southeast Asia.

The traveling time from Jakarta to Bandung will be reduced from more than three hours to just half an hour, which will great help spur economic activities along the line between the two cities.