Indonesian hospital struggles to cope with bodies of tsunami victims 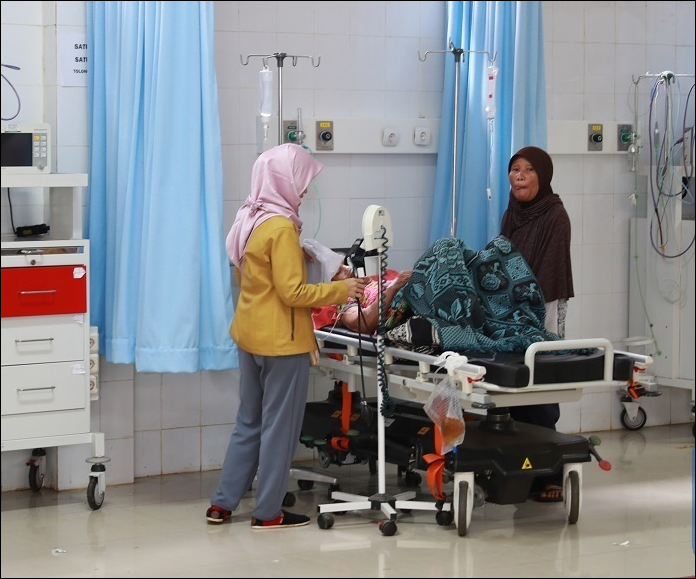 Entering fourth day after the Sunda Strait tsunami, the hospital receiving bodies of victims killed in the volcanic tsunami has started to make extra moves in securing hygene and health care in relevant facilities.

Hospital attendants working at the two facilities receiving bodies in Banten province's Berkah regional hospital in Pandeglang regency had to put on masks.

The hospital, which is located in the worst-hit regency of Pandeglang has recently been appointed to receive bodies from several public health centers.

It also hosts the identification process of bodies recovered by search teams in several locations alongside the Banten province coastline, which is carried out by the police's Disaster Victim Identification (DVI) unit.

Hospital director Firmansyah told Xinhua here on Wednesday that the hospital's mortuary is barely able to store all the several hundreds of bodies sent here in the past few days.

Besides, the hospital is also treating 122 patients injured from the tsunami.

"Most of the injuries are fracture cases, followed by injuries in the head that hit by stuff," Firmansyah said.

"Many of them who are from cities of other provinces were picked up by their families for further treatments in their own cities," he said.

Banten Provincial Police Chief Tomsi Tohir who visited the hospital early in the day said that the police's DVI team has so far recovered 238 bodies in Banten province, among which, 21 have not been identified by the unit yet.

"The police would work harder to identify those unidentified bodies as soon as possible," he said.

The identification process is carried out by steps of analyzing the DNA of the bodies as well as matching the photos or signature marks carried by the victims that fit with the police's documents.

As many as 430 people have been confirmed dead from the tsunami as of Wednesday, according to Indonesia National Disaster Mitigation Agency (BNPB).

The tsunami which was triggered by the eruption of the Anak Krakatau volcano in Sunda Strait has also left 1,495 people injured and 159 others missing.

Indonesian meteorology, climatology and geophysics agency (BMKG) has issued a warning that a tsunami remains imminent from both volcanic activities and a possible collapse of the volcano's wall which becomes fragile due to frequent eruptions.

Intensive rain around the volcano may lead to the collapse of the wall into the sea that could eventually trigger a tsunami, the agency explained.