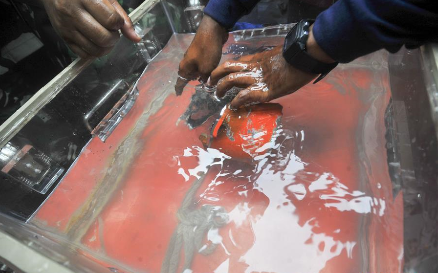 Indonesian transport safety committee will analyze data from a newly-retrieved cockpit voice recorder (CVR) of crashed Lion air aircraft and announce a definitive cause of the incident that killed all 189 people on board no later than one year, a senior investigator disclosed here on Monday.

Divers recovered the second black box of the brand new Boeing 737 Max 8 at 8:40 a.m. Jakarta time on Monday at the sea floor of Tanjung Karawang water of West Java province where the aircraft with flight number JT 6-10 plunged into the waters just shortly after taking off on Oct. 29, head of hydrography and oceanography of Indonesian navy Rear Admiral Harjo Susmoro revealed.

The cockpit voice recorder would undergo a drying and cleaning process before a gleaning process, which all of them would take 3 to 5 days, head of the committee Soerjanto Tjahjono said.

After undergoing the gleaning process, the cockpit voice recorder, which recorded the conversation of pilot and co-pilot just before the fatal crash, the data from the second black box will be analyzed, Tjahjono said.

On the length of the analysis, the investigator said it will depend on the complexity of the conversation in the cockpit and problems of human factors.

"After we release a preliminary report, we will issue a release of final report. So, hopefully, we can announce the cause of the crash no more than one year," he said at a press conference.

Tjahjono said all the processes will be undertaken in the black box facility of the Indonesian transport safety committee.

The cockpit voice recorder was retrieved in the depth of 33 meters at sea floor at the crash site, whcih was covered by a 30-cm think mud, Susmoro said.

The divers also recovered human remains in the forms of bones of about 7 kg in total and they were handed over the Lion Air management after the conference, he said.

The flight data recorder of the fatal flight was recovered earlier in November at the sea floor, not far from the site where the cockpit voice recorder was found.

The preliminary report based on information gleaned from the flight data recorder unveiled that the pilots struggle to control the plane's anti-stalling system just before the plane plunged into the water.

Lion Air plane dove into the waters a 13 minutes after taking off from Soekarno Hatta international airport in Banten province on a scheduled one-hour flight to Pangkal Pinang of Bangka Island.