WORLD Infections in Italy to rise in a fortnight: doctor

Infections in Italy to rise in a fortnight: doctor 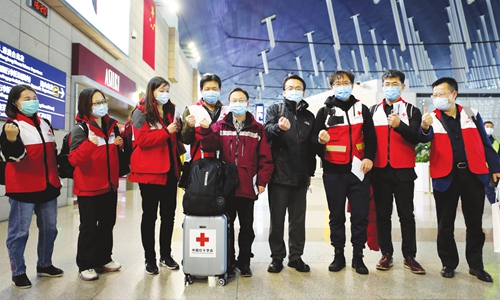 The expert team is ready for departure in Shanghai to Italy to help fight COVID-19 on March 12. (Photo: GT)

The number of infected cases of COVID-19 in Italy will continue to rise in the next two weeks, and it will take at least that long to evaluate the effects of the draconian measures that have been imposed in the country, a doctor with China's medical team in Italy told the Global Times.
Xiao Ning, part of China's first medical team in Italy, told the Global Times on Sunday that health authorities in Italy's hardest-hit region of Lombardy have communicated with the team about handing over the ICU to Chinese doctors, but no final decision has been made.
Xiao, a deputy director of the National Institute of Parasitic Diseases at the Chinese Center for Disease Control and Prevention, said Lombardy health authorities are looking into this option may because the hospitals in the region are understaffed and they want to take advantage of Chinese medics' experience.
The death toll in Italy which mounted to 4,032 as of Saturday, has surpassed that in China, with the country reporting a higher mortality rate of about 9 percent than other countries, which has caused worldwide concern. Lombardy, in northern Italy, has recorded an 11 percent mortality rate.
Xiao and his team arrived in Italy on March 13 and they are currently in Lombardy. They visited Pavia University Hospital on Saturday which has more than 5,000 staff, of whom 30 people became infected, many of them contracting the virus outside the hospital.
Italy imposed strict quarantine measures including city lockdowns and restrictions on people's movements in early March. Some experts predicted that the turning point in Italy may not come until mid- to late-April.
Xiao said he recognized the measures Italy has taken, but at the same time, he urged stricter enforcement. He noted that only about 40 percent of people on the street are wearing masks, which worried the medical team.
"Wearing masks is very important, especially in Italy where people like social activities," he said.
Xiao told the Global Times that Italian hospitals lacked supplies. In one hospital, he saw doctors and nurses only wore isolation gown and masks rather than high-standard protective suits, which are reserved for those treating patients in the ICU.
According to Xiao, a major reason for the high mortality rate may because most patients with mild symptoms are in-home quarantine. If their symptoms worsen, they will not receive immediate treatment.