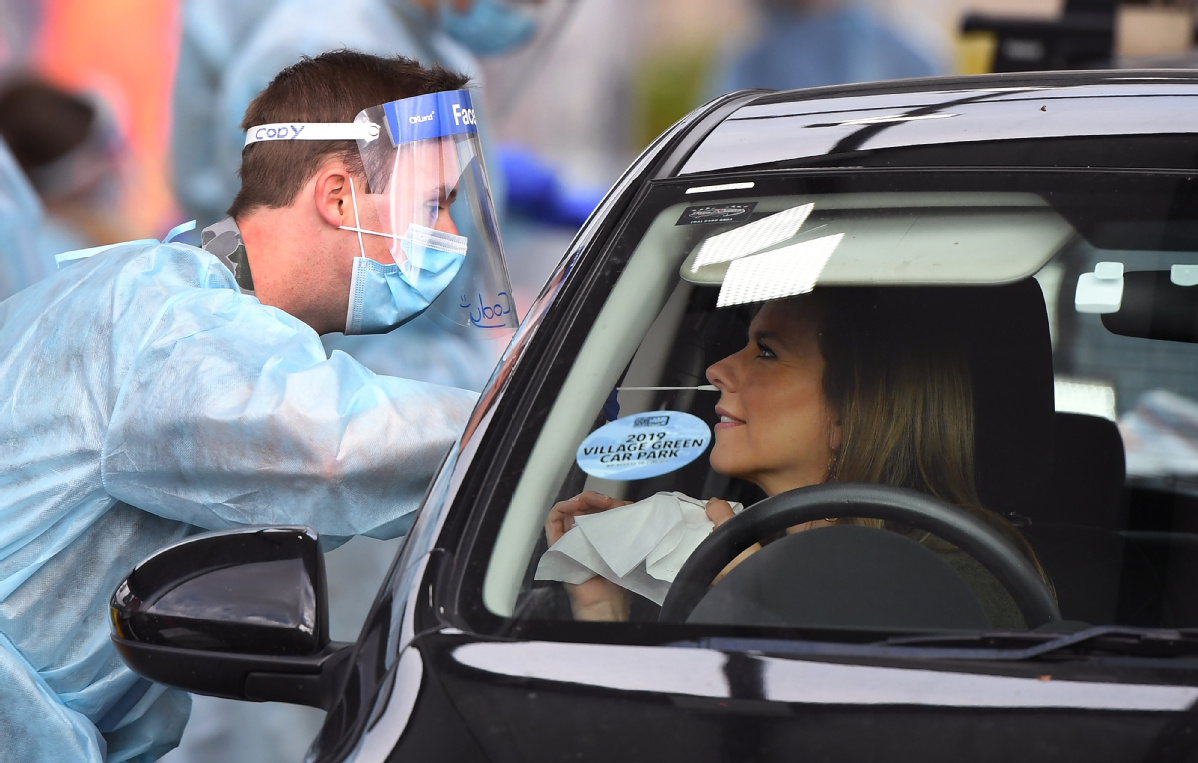 A member of the Australian Defense Force takes a swab sample at a drive-through coronavirus testing station in the Melbourne suburb of Fawkner on Thursday. (Photo: Agencies)

A spike of new infections is forcing the Australian state of Victoria back to lockdowns on roughly 30 suburbs in the state capital, Melbourne.

More than 1,000 Australian Defense Force medical personnel as well as health officials from New South Wales, South Australia, Tasmania and Queensland states have been drafted into the state to provide planning support and assistance for hotel quarantine arrangements, logistics and testing.

The state saw a surge in COVID-19 infections with 64 new cases reported on June 29. Following an announcement at a June 30 news conference in Melbourne by Daniel Andrews, the state premier, all international flights to Melbourne were diverted to other states. The lockdown came into effect on Thursday.

He said all residents in the affected suburbs "must stay at home" for the next four weeks.

Police were patrolling the streets to make sure people stay indoors. Andrews said people will be allowed out for four reasons: to buy food, for exercise, and for school and work.

"If you are sick, stay home and get tested," he said.

The last two weeks of June saw a massive spike in new cases in Melbourne as restrictions were relaxed not only in Victoria but throughout the country, following a sharp drop in the number of cases from May to June.

For almost two weeks, the state has seen a double-digit rise in cases each day. Most new infections have been through community transmission. Meanwhile, in the rest of the country, the number of cases has been in low single figures or at zero.

"These outbreaks have been deeply frustrating and unacceptable," Andrews said.

Many of the outbreaks have been traced to large family gatherings earlier in June and a breakdown in health controls in hotels used for quarantining travelers during the same period as the pandemic appeared to be in retreat.

Taghrid Istivan, associate professor of microbiology at RMIT University in Melbourne, said the outbreak was not unexpected.

She said health authorities, not only in Australia but overseas, have been warning of the possibility of a second wave of infections.

"The same is happening in the United States and Europe after easing the lockdown restrictions," Istivan said.

"People coming out of long weeks of lockdown are forgetting that the virus still exists in the community and the fact that not every infected person will have symptoms.

"Therefore, the ignoring of the need to continue practicing social distancing in general, and physical distancing between family members and friends, has led to the surge in cases."

Istivan said the risk of infections has increased as people gather indoors and in closed spaces due to the cold winter weather in Victoria.

She said that more than 53,000 COVID-19 tests had been conducted in Victoria previously, with a focus on hot spot suburbs.

"With the large number of tests, it is normal that more cases (mainly from asymptomatic carriers) will be detected, and that is good as it is identifying the most serious transmitters within the community," Istivan said.