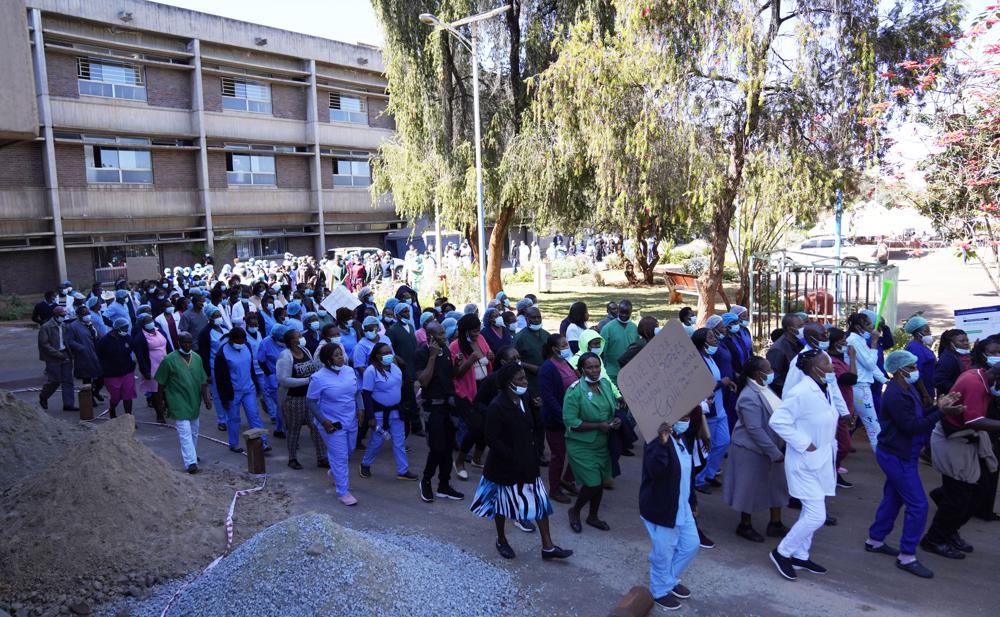 Health workers led by nurses take part in a demonstration over salaries at Parerenyatwa Hospital in Harare, on June, 21, 2022. As food costs and fuel bills soar, inflation is plundering people’s wallets, sparking a wave of protests and workers’ strikes around the world. (AP Photo/Tsvangirayi Mukwazhi)

Rising food costs. Soaring fuel bills. Wages that are not keeping pace. Inflation is plundering people’s wallets, sparking a wave of protests and workers’ strikes around the world.

Economists say Russia’s war in Ukraine amplified inflation by further pushing up the cost of energy and prices of fertilizer, grains and cooking oils as farmers struggle to grow and export crops in one of the world’s key agricultural regions.

As prices rise, inflation threatens to exacerbate inequalities and widen the gap between billions of people struggling to cover their costs and those who are able to keep spending.

“We are not all in this together,” said Matt Grainger, head of inequality policy at antipoverty organization Oxfam. “How many of the richest even know what a loaf of bread costs? They don’t really, they just absorb the prices.”

Oxfam is calling on the Group of 7 leading industrialized nations, which are holding their annual summit this weekend in Germany, to provide debt relief to developing economies and to tax corporations on excess profits.

“This isn’t just a standalone crisis. It’s coming off the back of an appalling pandemic that fueled increased inequality worldwide,” Grainger said. “I think we will see more and more protests.”

The demonstrations have caught the attention of governments, which have responded to soaring consumer prices with support measures like expanded subsidies for utility bills and cuts to fuel taxes. Often, that offers little relief because energy markets are volatile. Central banks are trying to ease inflation by raising interest rates.

Meanwhile, striking workers have pressured employers to engage in talks on raising wages to keep up with rising prices.

Eddie Dempsey, a senior official with Britain’s Rail, Maritime and Transport Union, which brought U.K. train services to a near standstill with strikes this week, said there are going to be more demands for pay increases across other sectors.

“It’s about time Britain had a pay rise. Wages have been falling for 30 years and corporate profits have been going through the roof,” Dempsey said.

Last week, thousands of truckers in South Korea ended an eight-day strike that caused shipment delays as they called for minimum wage guarantees amid soaring fuel prices. Months earlier, some 10,000 kilometers (6,200 miles) away, truckers in Spain went on strike to protest fuel prices.

Peru’s government imposed a brief curfew after protests against fuel and food prices turned violent in April. Truckers and other transport workers also had gone on strike and blocked key highways.

The situation is particularly dire for refugees and the poor in conflict areas such as Afghanistan, Yemen, Myanmar and Haiti, where fighting has forced people to flee their homes and rely on aid organizations, themselves struggling to raise money.

“How much for my kidney?” is the question most asked of one of Kenya’s largest hospitals. Kenyatta National Hospital reminded people on Facebook this week that selling human organs is illegal.

For the middle class in Europe, it’s become more expensive to commute to work and put food on the table.

“Increase our salaries. Now!” chanted thousands of unionized workers in Brussels this week.

“I came here to defend the purchasing power of citizens because demonstrating is the only way to make change,” protester Genevieve Cordier said. “We cannot cope anymore. Even with two salaries ... both of us are working, and we cannot get our head above water.”

In some countries, a combination of government corruption and mismanagement underpin the economic turmoil, particularly in politically gridlocked countries like Lebanon and Iraq.

The protests reflect a sense of growing financial insecurity. Here’s how that has played out in Africa:

— Health care professionals in Zimbabwe went on strike this week after rejecting the government’s offer of a 100% pay rise. The nurses say the offer does not come close to skyrocketing inflation of 130%.

— Kenyans have protested in the streets and online as the price of food jumped by 12% in the past year.

— Hundreds of activists this month protested the rising cost of living in Burkina Faso. The U.N. World Food Program says the price of corn and millet has shot up more than 60% since last year, reaching as high as 122% in some provinces.

“As far as this cost of living that keeps increasing is concerned, we realized that the authorities have betrayed the people,” said Issaka Porgo, president of the civil society coalition behind the protest in the west African country.

Protesters condemn the military junta, which ousted the democratically elected president in January, for giving themselves a pay raise while the population faces rising prices.

The International Monetary Fund says inflation will average about 6% in advanced economies and nearly 9% in emerging and developing economies this year. Global economic growth is projected to slow by 40%, to 3.6%, this year and next. The IMF is calling on governments to focus support packages to those most in need to avoid triggering a recession.

The slowdown comes as the COVID-19 pandemic is still gripping industries worldwide, from manufacturing to tourism. Climate change and drought are hitting agricultural production in some countries, prompting export bans that push up food prices even further.

“We will see more protests, probably broader and angrier, but I do not expect destabilizing or regime-changing protests,” he said, as producers adjust and governments approve subsidies.