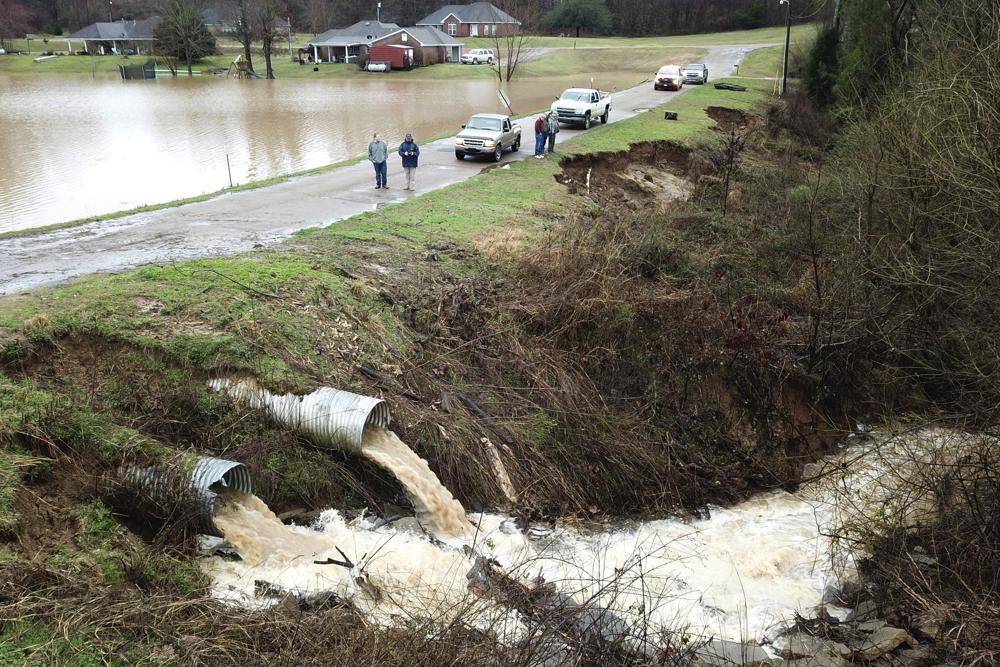 States will soon be flooded with federal money to address a pent-up need to repair, improve or remove thousands of aging dams across the U.S., including some that could inundate towns or neighborhoods if they fail.

The roughly $3 billion for dam-related projects pales in comparison to the tens of billions of dollars going to roads, rails and high-speed internet in the $1 trillion infrastructure plan signed Monday by President Joe Biden. But it’s a lot more than dam projects had been getting.

The money could give “a good kick-start to some of these upgrades that need to be done to make the dams as safe as possible,” said David Griffin, manager of Georgia’s Safe Dams Program and president-elect of the Association of State Dam Safety Officials.

The U.S. has more than 90,000 dams, averaging over a half-century old. An Associated Press analysis in 2019 identified nearly 1,700 dams in 44 states and Puerto Rico that were in poor or unsatisfactory condition and categorized as high-hazard — meaning their failure likely would result in a deadly flood. The actual number almost certainly is higher, because some states declined to provide complete data for their dams.

Though many large dams are maintained by federal or state agencies, most of the nation’s dams are privately owned. That makes fixing them more challenging, because regulators have little leverage over dam owners who don’t have the money to make repairs or simply neglect the needed fixes.

Over the past decade, the Federal Emergency Management Agency provided more than $400 million for projects involving dams, mostly to repair damage from natural disasters. But until just a few years ago, there was no national program focused solely on improving the thousands of dams overseen by state and local entities.

FEMA’s Rehabilitation of High Hazard Potential Dams Grant Program has divvied up $31.6 million among 36 participating states from 2019-2021. That amount, appropriated by Congress, was barely one-fifth of what had been authorized under a 2016 federal law.

The infrastructure bill provides more than 18 times that amount, pumping $585 million into the program for hazardous dams, including $75 million set aside for their removal. Because of administrative requirements, FEMA said the new money likely won’t start flowing to states before the 2023 fiscal year, which begins Oct. 1, 2022. Previous grants often have been enough only to cover engineering or planning expenses.

“This funding will allow for significant increases in the number and amount of actual dam rehabilitation and removal projects which the current funding levels have not allowed,” said David Maurstad, FEMA’s deputy associate administrator for insurance and mitigation.

Repairing and modernizing all 14,343 high-hazard dams that aren’t owned by the federal government could cost more than $20 billion, according to an estimate by the dam safety association.

“The program is not really intended to fix all of them, but this will definitely help to fix some of the worst of those,” said Mark Ogden, a former Ohio dam safety official who is now a technical specialist at the association. “It will definitely improve public safety.”

The infrastructure legislation also includes $148 million for FEMA to distribute to state dam safety offices — a significant increase over the $6 million to $7 million annually that has been divided among states. The new money could help states hire more staff or consultants to assess the safety of dams and develop emergency action plans. Every state except Alabama has a dam safety program, but many are underfunded and understaffed, creating a backlog of work.

After dam failures resulted in flooding that forced the evacuation of about 10,000 people last year in Michigan, a review by the dam safety association found the state’s dam safety office was “extremely understaffed” and that it hadn’t invested in dam safety “for many decades.”

Michigan responded by beefing up its budget. A state spending plan that took effect last month includes $13 million for grants to repair and remove dams and $6 million for an emergency fund that could be tapped when dam owners are unwilling or unable to make repairs. It also includes money to hire more staff for the dam safety program.

Additional dam funding is sprinkled throughout the federal infrastructure legislation.

The Bureau of Reclamation will get $500 million over five years for its dam safety program, a 50% increase over its current annual appropriation. The money is likely to go toward major renovation projects at B.F. Sisk Dam on San Luis Reservoir in California and El Vado Dam in New Mexico, said reclamation dam safety officer Bob Pike. That will free up other funds to hasten repairs at about 20 other high-hazard dams in the bureau’s footprint of 17 western states, he said.

The bill includes up to $800 million through several federal agencies that could be used to remove dams, allowing fish to pass through.

The large influx of federal funds shows that “removing dams in many places is good and appropriate and healthy for river resilience,” said Tom Kiernan, president of the nonprofit group American Rivers.

The infrastructure bill also includes about $750 million that could fund improvements at hydroelectric dams or retrofit existing dams to start producing energy. That includes a new grant program capped at $5 million a year per facility. The hydropower industry is pushing for separate legislation that also would create a tax credit for improvements to hydroelectric dams.

The funding in the infrastructure bill “is just a down payment,” said LeRoy Coleman, spokesman for the National Hydropower Association. “We need transformational change for more clean energy and for healthier rivers.”