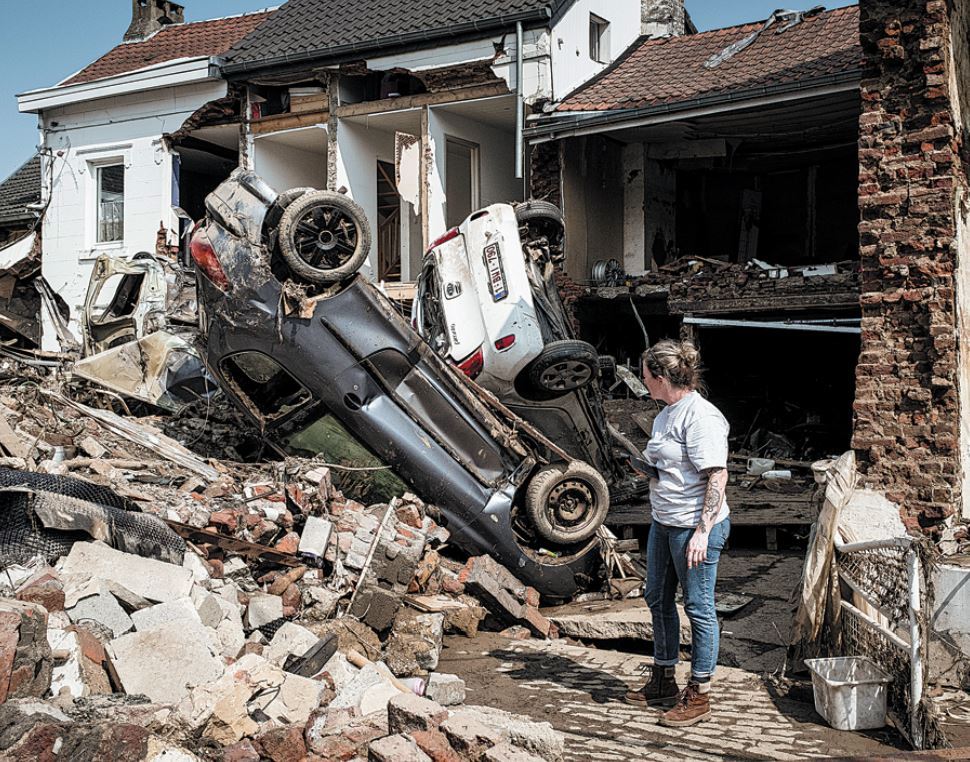 A woman on Monday takes in the devastation left by the flooding in Liege, Belgium. The country held a day of mourning on Tuesday for the victims of the disaster. (Photo: AP)

Climate scientists and political leaders are calling for urgency in building stronger infrastructure to prevent the kind of destruction caused by floods that washed over parts of Europe last week.

Torrents swept through western and southern Germany, Austria, Belgium and the Netherlands, destroying buildings and bridges and leaving around 200 people dead.

"It is a gigantic task. This is the hour of the engineers," she was quoted as saying by Reuters.

Armin Laschet, premier of the hard-hit German state of North Rhine-Westphalia and a front-runner for the Sept 26 federal election, told Deutsche Welle News that more needs to be done to protect people from the effects of the climate crisis.

"We will be faced with such events over and over, and that means we need to speed up climate protection measures on European, federal and global levels," he said.

The disaster was caused by heavy rain drawn together by a powerful low-pressure system, according to a report by Reuters.

Wim Thiery, a climate scientist at Vrije Universiteit Brussel, told Reuters that the speed and scale of the catastrophe meant preparing for similar events will be difficult.

"As climate change continues, as extreme events continue to increase in intensity and frequency, there are just limits to the extent to which you can protect yourself," Thiery said.

He said countries must build infrastructure for agriculture, transport, energy and housing, as well as for water management. He also added that cuts to greenhouse emissions will not influence the weather for many decades.

German Chancellor Angela Merkel, who will soon step down after 16 years in office, described the flooding as "terrifying", after visiting one of the areas worst affected by the record rainfall and floods.

Just days after the European Union outlined a package of steps toward "net zero" emissions, Merkel said the effort to tackle the impact of climate change must be "faster".

The EU launched measures focusing on reducing greenhouse gas emissions to limit the rise in global temperature that in recent months is understood to have caused severe heat waves and wildfires in North America and Siberia.

With 10 weeks before Germany goes to the polls for the federal election, there is now renewed focus on the nation's ability to handle extreme weather, with critics saying its emergency response systems failed.

Martina Fietz, a deputy government spokeswoman, said a flood warning app functioned, but the catastrophic floods "show that we need to do more and to improve".