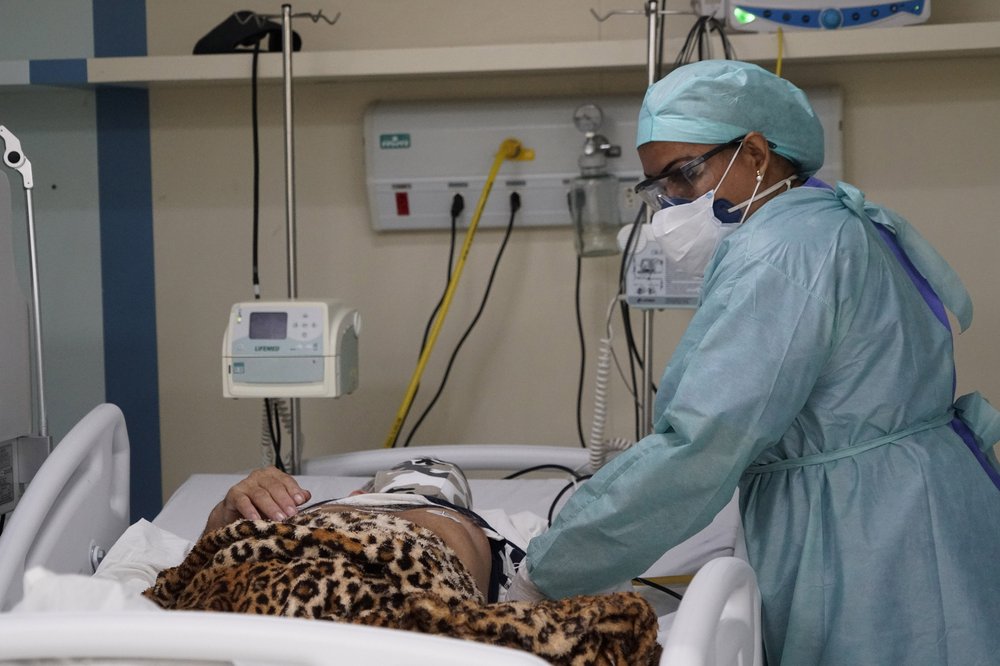 A medical worker attends to a COVID-19 patient at the Sao Jose municipal hospital, in Duque de Caxias, Brazil, Saturday, May 16, 2020. (Photo: AP)

Specialists stood over intubated patients in the intensive care unit, reviewing charts and jotting down notes. They conversed in low voices, barely audible amid the incessant beeps from patients’ monitors.

Two empty beds were in sight Saturday morning, but doctors at the Sao Jose hospital in a working-class city just north of Rio de Janeiro said they would be occupied by afternoon. It likely will be only a matter of days, or perhaps hours, until the rest are full, too, as the coronavirus spreads.

“People are coming from all over,” José Carlos de Oliveira, health secretary for the city of Duque de Caxias, told The Associated Press in the hospital’s parking lot.

“This disease is not kidding around. Whoever thinks it’s a joke is going to lose their life,” said de Oliveira, a physician who recently recovered from the virus himself.

Four ambulances soon pulled up simultaneously at the hospital. A fifth had arrived 20 minutes earlier. All transported COVID-19 patients and were making a dash for the facility’s precious few remaining beds.

Sao Jose is accepting overflow from other hospitals whose facilities are already maxed out in treating COVID-19 cases.

In Rio de Janeiro state, which has the second-highest number of deaths in Brazil, most hospitals accepting COVID-19 patients have run out of intensive care beds. According to the state’s health secretary, as of Thursday, 369 people thought to have the virus were waiting to be transferred to an ICU.

The Sao Jose facility was just inaugurated, on May 4, and already 90% of its 128 beds are occupied. Less than a week after the World Health Organization declared a pandemic, the city of Duque de Caxias bought a private hospital and began racing to transform it into an intensive care facility exclusively for the treatment of COVID-19 patients.

More than 15,000 Brazilians have died from the disease so far, though many experts say the figure is probably significantly higher, with cases missed because of insufficient testing. In recent days, more than 800 people have been added to the death toll every 24 hours and the crisis’ peak has yet to hit Latin America’s largest nation, the experts say.

President Jair Bolsonaro has consistently downplayed the pandemic, calling the coronavirus a “little flu” and fiercely criticizing state governors and mayors who have closed businesses introduced lockdowns and recommended stay-at-home measures. Bolsonaro has instead advocated for everyone who doesn’t belong to “at-risk” groups to return to work so the economy doesn’t collapse.

For most people, the new coronavirus causes mild or moderate symptoms including fever and cough. The risk of death is greater for the elderly and people with other health problems such as diabetes or hypertension.