WORLD Inside Yemen: The economic consequences of war

Inside Yemen: The economic consequences of war 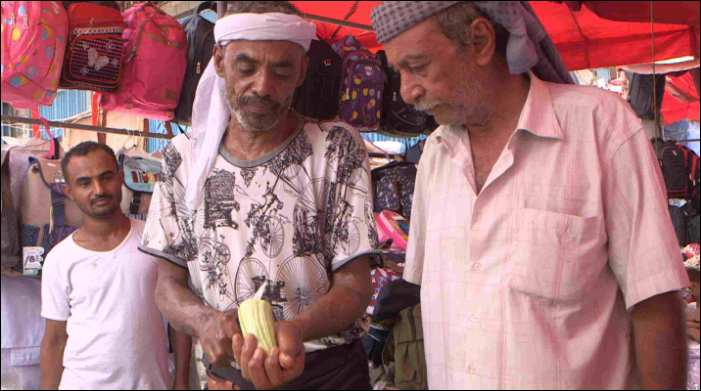 A 52-year-old vegetable stall owner at one of Aden's outdoor markets. (Photo: CGTN)

"Everything has changed," says a 52-year-old vegetable stall owner at one of Aden's outdoor markets. He points to a giant cucumber he has cut open and is filling with salt, "we use to buy this for 1,500-2,000 riyals, but now it's 5,000 to 6,000 to 7,000 and many time we can't even find it. The government needs to do more" he calls out to the passersby. " The rise in prices is cruel. We are fighting to survive."

Almost everyone in Yemen would agree with him. The country's economy is in dire conditions.

The country's currency, the riyal has lost more than three times its value over the last three years while more and more people hoard foreign currencies.

This is causing the black market to thrive pushing prices through the roof, says Hisham Aref Abdu Seif, the manager of one of the city's foreign exchanges. "When businessmen don't find foreign currency in the market they must buy it on the black market at higher prices. This leads to every price increasing and that affects the consumers and makes everyday life harder for those who have limited income."

Last year Yemen's central bank chose to float the riyal, which had been pegged at 250 to the US dollar. Earlier this month the riyal hit historic lows of just under 800.

Basic items, such as bread are becoming too expensive for much of the country as the price of flour more than doubles.

The blockades of ports and roads have made getting goods in and around the country difficult, worsening the already desperate humanitarian crisis.

Sixty thousand liter shipments of heavily depended on imported oil that use to come once a day before the war have trickled down to once every 10 to 15 days due to the lack of foreign currency and insecurity.

When it is available people line up for hours to buy it at black market prices, such as Salah Chelebi. "It's very hard, very hard. There is no gas, it's all black market," the well-dressed 49-year-old says.

"Smuggled petrol is 8,600 riyals per 20 liters, but it's sold inside the stations as legal gas. The regular price should be sold at 6,600, but that is still expensive."

The price of education and even life-saving medicine is out of reach for many Yemenis.

Despite a 2.2 billion US dollar cash injection into Yemen's central bank by Saudi Arabia, many say they are not seeing any improvements.

Aden citizen Nasser Marwan, accuses the Yemeni government under President Abd-Rabbu Mansour Hadi of being corrupt saying "we cannot buy rice, we cannot buy sugar, we cannot buy oil or gas, nothing! The citizen does not have a salary, our livelihood is in God's hands. What shall he do? Steal?"

More than one million public sector workers have not been paid for months due to the lack of currency in Yemen's central bank.

This deteriorating economic situation has sparked protests across the south against the government and calling on Saudi Arabia, who leads a coalition backing Yemeni government fighters against Houthis rebels, to do more.

Finance and investment professor at Aden University, Dr. Mossaed Ahmed Al Qutarby, says "all the indexes show that the situation is getting worse. The government has taken no big decisions and even the coalition is not playing a role. It's not what we were hoping for. The corruption, the coalition can put pressure on the government to remedy the situation."

But until improvements are seen, aid agencies fear Yemen's economic collapse could end up killing even more Yemenis than the violence underlying it.