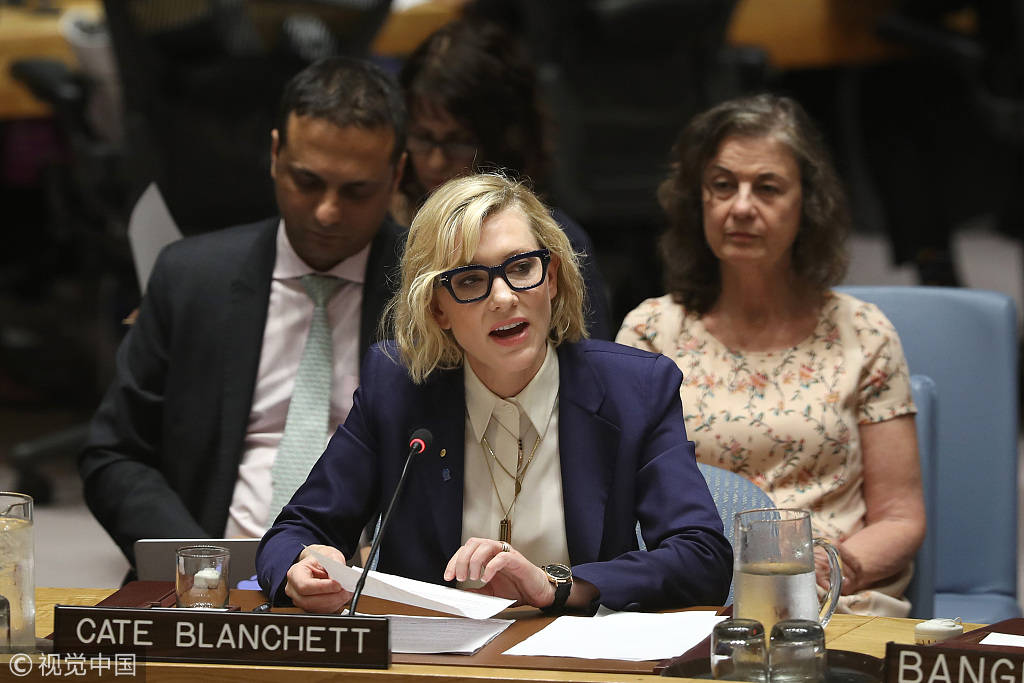 Cate Blanchett, actress and UNHRC Goodwill Ambassador, speaks before a Security Council Meeting on the situation in Myanmar and the ongoing Rohingya refugee crisis at the United Nations Headquarters, August 28, 2018. Photo: VCG

Noting that the massive refugee emergency that began one year ago in Rakhine State, Myanmar, has become "one of the world's worst humanitarian and human rights crises," the UN chief said that "the response to the crisis must be a global one."

Speaking at a Security Council meeting to mark one year of the refugee exodus from Myanmar, Guterres said that "much more must be done to alleviate the very real risks to life from current and impending monsoons."

The secretary-general expressed his gratitude to World Bank President Jim Yong Kim for mobilizing almost half a billion dollars in grant-based support for Rohingya refugees and host communities.

"The grant-based assistance approved by the Asian Development Bank is also crucial in meeting medium-term needs and providing assistance towards life-saving priorities," he said.

Noting that "conditions are not yet met for the safe, voluntary, dignified and sustainable return of Rohingya refugees to their places of origin or choice," the UN chief said that he wants members of the Security Council to join him in urging the Myanmar authorities to cooperate with the UN, and to ensure immediate, unimpeded and effective access for its agencies and partners.

"Access is critical to meet the enormous needs, and to allay the fears of refugees who would like to return home," he said.

"There can be no excuse for delaying the search for dignified solutions that will allow people to return to their areas of origin in safety and dignity, in line with international standards and human rights. The United Nations remains ready to help develop such a plan," said the UN chief.

"Voluntary relocation along with freedom of movement, an end to segregation and discrimination, inclusive development, the re-establishment of the rule of law and public safety are essential," he added.

UN Development Programme (UNDP) Associate Administrator Tegegnework Gettu said the agency shares international concerns about the situation in Rakhine and the plight of the Rohingya.

Creating sustainable conditions for the voluntary return of refugees from Bangladesh will require comprehensive and durable solutions, he said, emphasizing the need to address Rakhine's significant development challenges and to lift restrictions on free movement and access to services.

Every refugee must also be free to decide when to return, he said, emphasizing that dealing with such issues might go far towards building trust among the people of Rakhine State.

Outlining efforts by UNDP and the UN Refugee Agency (UNHCR) to create conditions suitable for voluntary returns, he said effective access and streamlined procedures are essential to accessing entire village tracts and undertaking area-based programmes that will help to build social cohesion.

In addition to implementing the tripartite memorandum of understanding, UNDP, UNHCR and other UN agencies have been working in Rakhine to put a wide-ranging development and humanitarian assistance initiative in place with support from major donors, he said.

He also acknowledged the support from the Government of Bangladesh to Rohingya refugees, while noting that only 34 percent of the needs identified by the 2018 Joint Response Plan have been funded.

"Creating the conditions for voluntary, safe, dignified and sustainable returns to Myanmar will require at least medium-term planning," he said, adding that addressing the needs of the refugees in Cox's Bazaar, Bangladesh, is also of primary importance.

The Security Council on Tuesday afternoon was also briefed by the UN Refugee Agency Goodwill Ambassador Cate Blanchett on the situation in Myanmar and the Rohingya refugee crisis. British Minister of State for the Commonwealth and the UN, Lord Ahmad, chaired the meeting.

Britain, this month's president and the lead on Myanmar in the Council, has chosen to hold a meeting on Myanmar to mark the one-year anniversary of the crisis that has led to more than 750,000 refugees fleeing to Bangladesh.