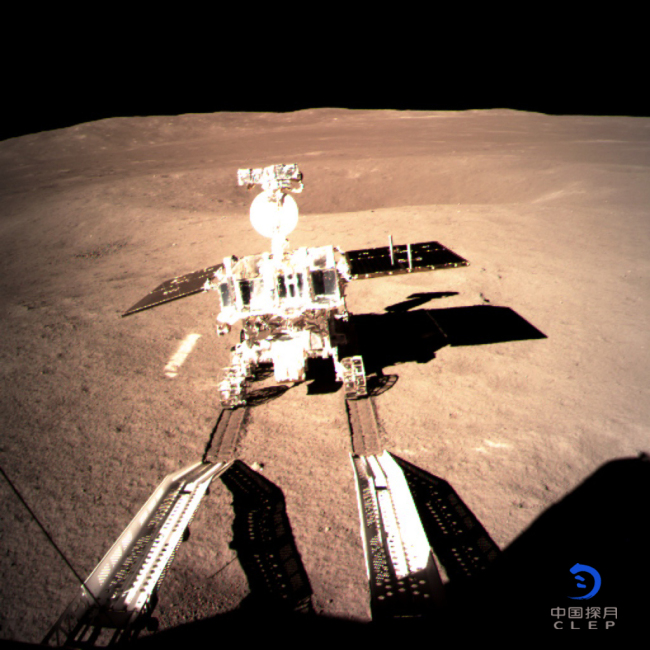 This handout image taken on 3 January 2019 shows China's lunar rover, Yutu-2, or Jade Rabbit-2, leaving the first ever "footprint" after rolling down a track extending from China's robotic lunar probe Chang'e 4 lander on the far side of the moon. (Photo: IC)

China's Chang'e-4 probe has started carrying out a series of scientific research tasks involving multiple countries and organizations since it landed on the far side of the moon on Jan. 3, the China National Space Administration (CNSA) announced Thursday.

The probe, comprising a lander and a rover, was launched on Dec. 8, 2018. The Yutu-2 rover left its first trace on the far side of the moon late at night on Jan. 3, after it separated from the lander smoothly.

A neutron radiation detector aboard the lander, developed by Germany, and a neutral atom detector on the rover, developed by Sweden, have both switched on for test operations, according to a CNSA statement.

Their data will be transmitted to the ground via the relay satellite Queqiao (Magpie Bridge), which was launched in May 2018 to set up the communication link between Earth and the moon's far side, and jointly studied by Chinese and foreign scientists, it said.

The Chang'e-4 mission, including the probe, Queqiao and a micro satellite orbiting the moon, is equipped with four payloads developed through international cooperation, providing more opportunities to the world's scientists and combining human expertise in space exploration.

Queqiao carries a low-frequency radio astronomical instrument developed by the Netherlands, and the radioisotope heat source, a collaboration between Chinese and Russian scientists, will support the probe through the lunar night, each equivalent to about 14 days on Earth, when the temperature can fall to minus 180 degrees Celsius.

The ground station that China built in Argentina has played an important role in the monitoring and control of the mission, and ground stations run by the European Space Agency will also offer support.

A micro-imaging camera by Saudi Arabia aboard the micro satellite, which was launched together with Queqiao, is orbiting the moon and has sent back a photo in June 2018, capturing Earth and the moon together.

NASA of the United States has also discussed cooperation in lunar and deep space explorations with CNSA. The two sides has collaborated on the study of the landing of the probe.

NASA has offered the orbital data of its Lunar Reconnaissance Orbiter (LRO) and the Chinese side has provided the landing timing and location, it said.