Military jets could be seen flying over the Iraqi capital early Wednesday, hours after Tehran launched more than a dozen ballistic missiles at Iraqi bases where US troops are located. 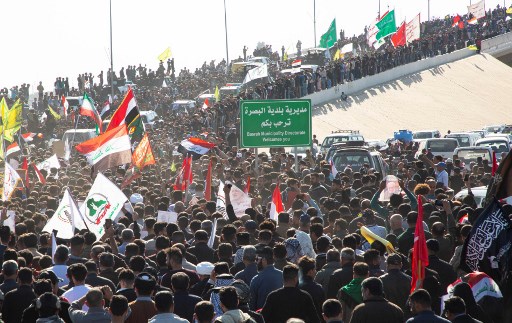 Iraqi mourners gather at the Shaheed (martyr) Mohammed Baqir al-Sadr Bridge, named after Mohammed Baqr Al-Sadr, assassinated during the regime of ousted president Saddam Hussein in the 1980's, as they welcome the body of Abu Mahdi al-Muhandis, the slain chief of Hashed al-Shaabi, an Iraqi paramilitary force with close ties to Iran, in the southern city of Basra after it came from Iran on January 7, 2020 ahead on his burial. (Photo: AFP)

AFP's correspondents saw jets cutting through the clouds over Baghdad but could not immediately identify the planes.