International community calls for end of police brutality in Nigeria 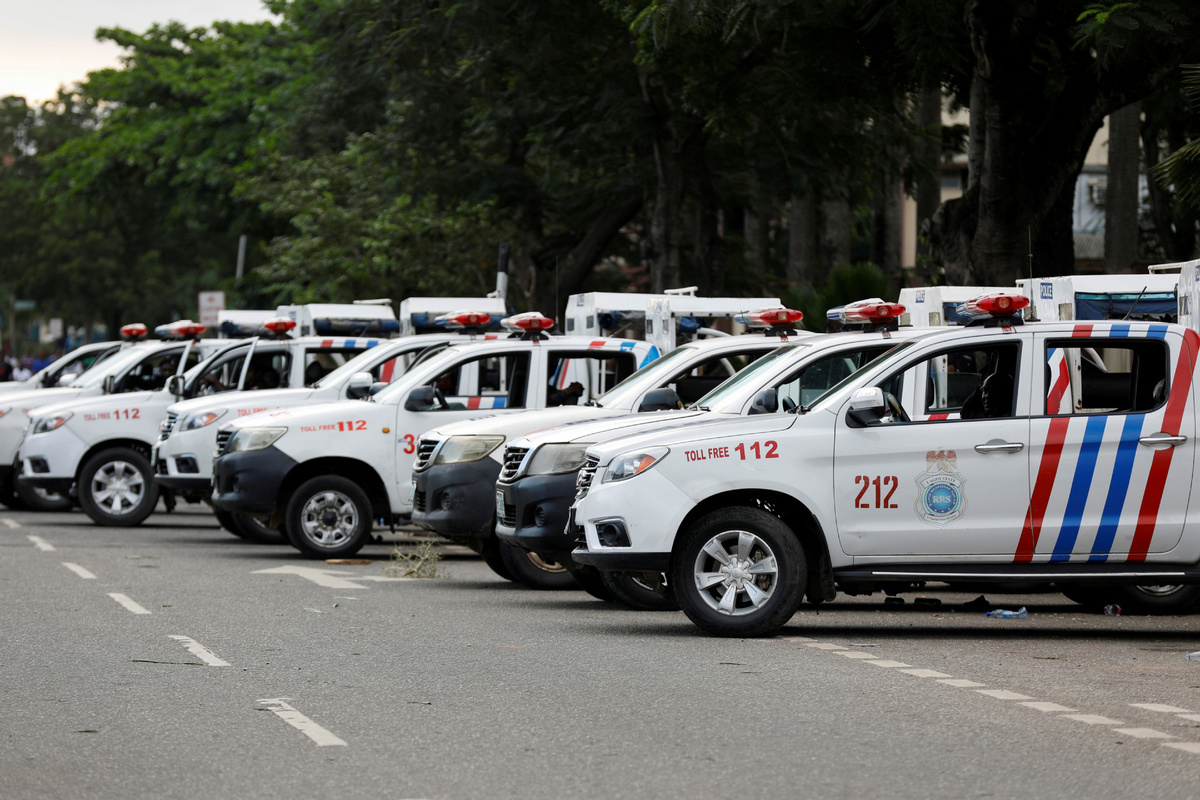 Police vehicles are seen parked during a protest, as authorities imposed a round-the-clock curfew on the Nigerian state of Lagos, in response to protests against alleged police brutality, Nigeria, Oct 20, 2020. (Photo: Agencies)

The international community has called for an end to police brutality in Nigeria, following reports by Amnesty International that the country's forces shot and killed peaceful protesters.

The two-week-long protests that escalated on Oct 20 started as a movement against a now-disbanded Special Anti-Robbery Squad that was accused of extortion and committing extrajudicial killings.

António Guterres, the UN secretary-general, said on Oct 23 he was following recent developments in Nigeria and called for an end to reported police brutality and abuses.

In a statement issued by his spokesperson, Guterres condemned the violent escalation on Oct 20 in Lagos which resulted in multiple deaths and many injuries.

He called on the Nigerian authorities to investigate the incidents and hold the perpetrators accountable.

Guterres urged the security forces to act at all times with maximum restraint while calling on protestors to demonstrate peacefully and refrain from violence.

The secretary-general reiterated the readiness of the United Nations to support national efforts towards finding a solution.

Josep Borrell, the high representative of the European Union for foreign affairs and security policy, also condemned the brutality, saying it was alarming to learn several people had been killed and injured during the protests.

"It is crucial those responsible for abuses be brought to justice and held accountable," Borrell said. "Following the government's will to deliver on reforms, we expect to see decisive implementation."

Moussa Faki Mahamat, the chairperson of the African Union Commission, also joined in condemning the violence in Nigeria.

Mahamat appealed to all political and social actors to reject the use of violence and respect human rights and the rule of law.

He further urged all parties to privilege dialogue in order to deescalate the situation and find concrete and durable reforms. To that end, Mahamat welcomed the decision by the federal government to disband the Special Anti-Robbery Squad.

The chairperson reiterated the AU's commitment to continue to accompany the government and people of Nigeria in support of a peaceful solution, and encouraged the country's authorities to conduct an investigation to ensure perpetrators of acts of violence are held to account.

The Economic Community of West African States called on protesters in Nigeria to remain peaceful in their conduct.

"While ECOWAS recognizes the right of citizens to freedom of expression and peaceful assembly and protests, it also wishes to stress those rights should be exercised in a non-violent manner," it said in a statement released on Wednesday.

The commission also urged the Nigerian security operatives to exercise restraint in the handling of the protests and act professionally.

"ECOWAS appeals to the government, the youth and civil society to urgently pursue dialogue for an early and amicable resolution of this social unrest and maintain the Nigerian image as a bastion of law and order," the statement read.

South Africa's Inkatha Freedom Party called on President Cyril Ramaphosa, who is the chairperson of the African Union, to urgently intervene to raise the escalating violence Nigeria at the UN Security Council.

The political party also urged Ramaphosa to call for an extraordinary meeting with the ECOWAS regional block, in order to ensure the stability of the West African region is not threatened.

"We welcome any form of investigation by the government of Nigeria to find the underlying cause of this matter and we call for calm, restraint and dialogue, which may address the very relevant concerns expressed by protestors," the party said in a statement released on Oct 20.

In a statement through its spokesperson, the Nigerian presidency on Oct 21 appealed for understanding and calm across the nation, as implementation of the reforms in the country's police gathers pace at federal and state levels.