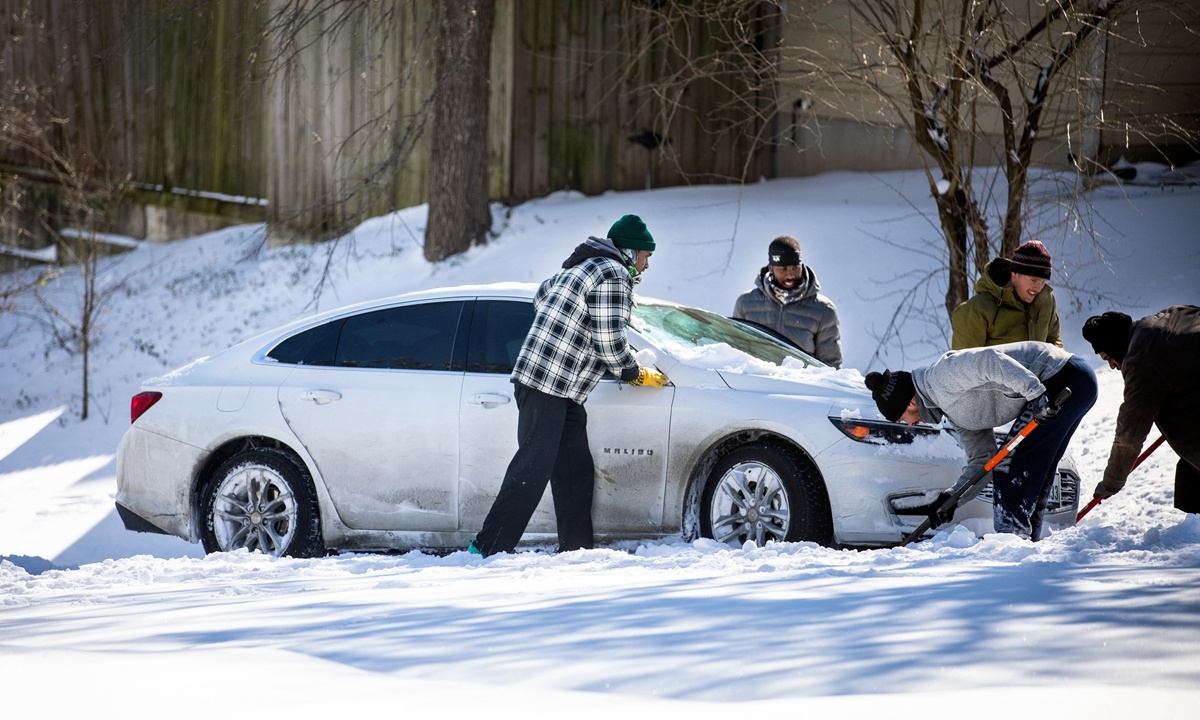 A man shovels snow from under a car stuck on a hill on February 15, 2021 in East Austin, Texas. Winter storm Uri has brought historic cold weather to Texas, causing traffic delays and power outages, and storms have swept across 26 states with a mix of freezing temperatures and precipitation. Photo: AFP

A strong cold winter storm swept Texas in the southern US, resulting in the blackout in a large number of areas in the state, or even the disruption of water supply. Millions of people have no electricity to heat their homes and to warm themselves. They are in difficult or even dangerous situations, with at least 31 people having died in the country.

This should not have happened in the US, perceived as the world's most developed country, let alone Texas, which is still a big energy state in the country. There are many reasons for this disaster, but one of them is man-made.

It is very necessary for the US society to reflect on it as a loophole in human rights, however, the elites there would obviously refuse to do so.

Tim Boyd, the mayor of Colorado City, Texas, said in a post to the public that "No one owes you or your family anything; nor is it the local government's responsibility to support you during trying times like this! Sink or swim it's your choice! The City and County, along with power providers or any other service owes you nothing!"

He also wrote that, "Only the strong will survive and the weak will perish," and he even said that "this is sadly a product of a socialist government where they feed people to believe that the few will work and others will become dependent for handouts." Boyd later resigned as his remarks had provoked public anger, but it seems that he really believes in what he posted, and so do many American politicians.

From the perspective of an outsider, the logic of the tragedy of nearly 500,000 deaths due to the COVID-19 epidemic in the US so far and more than 20 people being killed in the winter storm in Texas are the same. The logic is that the attention of the capital and the government has not been directed toward the protection of human rights. The capitalist system in the US has derived a set of national morals that deviated from the public interest and has gradually become flashy but useless.

Take human rights. The US' definition of the concept is becoming narrower and confined to the field of political rights. It echoes the concerns of a few in the well-off class and senior intellectuals, and is gradually drifting away from the various rights that the general public relies on for their daily survival.

When people need the right to health and heating in the face of the COVID-19 pandemic, the concept that US elites are more willing to promote overtly and secretly have become social Darwinism. The US' concept of "freedom" actually conceals the cold-blooded proposition of the "freedom of being eliminated."

The US' notion of "democracy, human rights and freedom" is actually a combination of "elections, political rights and social Darwinism." As such, it comes as no surprise that various human tragedies often occur in such a wealthy country as the US. To live in the US, you must have the strength and capability to save yourself in the event of a disaster, or you should be able to pay a considerable amount of money for the help you seek. Otherwise, you deserve the miserable situation you are in, and it's more worthy for you to pin your hopes on charitable organizations and God, instead of the government.

Boyd portrayed the government's assisting the victims as "sadly a product of a socialist government." This reflects how much he and many other American politicians like him feel contempt for government's efforts on people's livelihood. Whether they will survive or die in the face of natural disasters is the public's own business and it's not worthy for US governments and officials to protect people's lives - Boyd's words are really shocking.

Such a US should stop preaching to China on human rights. The US and China have different political focuses. What China seeks is the health, safety and happiness of its people, while the US wants to see political rights orderly distributed among social elites in a capitalist manner. The human rights outlooks held by China and the US are based on different groups of people. Different rights are positioned in different places in the two countries. As a result, China's human rights construction has brought tangible benefits to all Chinese people, while the US human rights view is more suitable to be used to brag about and as an ideological tool to launch attacks against others.

Washington, please take care of your own people in the freeze and put an end to the deaths caused by COVID-19 first thing first. We may not link these issues to human rights, but this should be what "America First" is all about.