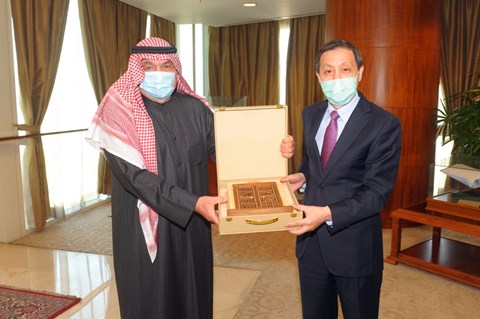 China is prepared to continue consolidating strategic mutual trust with Kuwait, promoting joint construction of the Belt and Road, and deepening the China-Kuwait strategic partnership in the new era for the benefit of the two countries and peoples, said Chinese Ambassador to Kuwait Li Minggang.

Li told Xinhua in a recent interview that Monday marks the 50th anniversary of the establishment of diplomatic relations between China and Kuwait.

"Kuwait is the first Gulf Arab country to establish diplomatic relations with China, the first country in West Asia-North Africa to sign cooperation documents under the Belt and Road Initiative (BRI) with China," Li said, noting that Kuwait also provides the most government concessional loans to China among Arab countries.

In the past 50 years since the establishment of diplomatic ties, China-Kuwait relations have withstood various tests and achieved rapid development, Li noted.

Their political mutual trust has been continuously strengthened, and the two sides have always firmly supported each other on issues concerning their respective core interests and major concerns, establishing a model of friendly relations between countries, Li said.

The BRI is highly compatible with Kuwait's Vision 2035, a national development plan designed to introduce a change in Kuwait's oil-reliant economic structure and transform the oil-rich Gulf state into a trade and financial hub by 2035, Li noted, adding that China has remained the largest exporter and the largest non-oil trading partner of Kuwait.

"In 2020, the bilateral trade volume between China and Kuwait reached 14.3 billion U.S. dollars, more than 70 times that of the beginning of the establishment of diplomatic relations between the two countries," Li said.

"In 2020, China imported more than 27.5 million tons of crude oil from Kuwait, and Kuwait has become one of the major crude oil exporters for China," Li said.

Friendship between countries also lies in the people-to-people exchanges, Li noted, adding that Kuwait is the only Gulf country that has a medical team dispatched by the Chinese government, which strongly promotes exchanges and cooperation in the medical and health fields between the two countries.

"The Chinese cultural center, which will be the first of its kind in the Gulf region, is expected to be unveiled this year, which will further promote mutual understanding between the two peoples," Li said.

Since the coronavirus broke out, China and Kuwait have demonstrated the connotation of a community with a shared future for mankind with practical cooperation to fight the pandemic, Li stressed.

"At the crucial time to combat the COVID-19 pandemic in China, the Kuwaiti side donated medical supplies to China," Li said, adding that China has also sent medical experts to Kuwait despite the disruptions of the pandemic, and the Chinese enterprises have assisted the Kuwaiti side in building the country's first makeshift hospital.

"China will start to implement the new five-year plan this year, and there is huge space for China's 'dual circulation' development pattern to align with Kuwait's Vision 2035, which will provide a strong impetus and broad prospects for the pragmatic cooperation between the two countries," Li added.