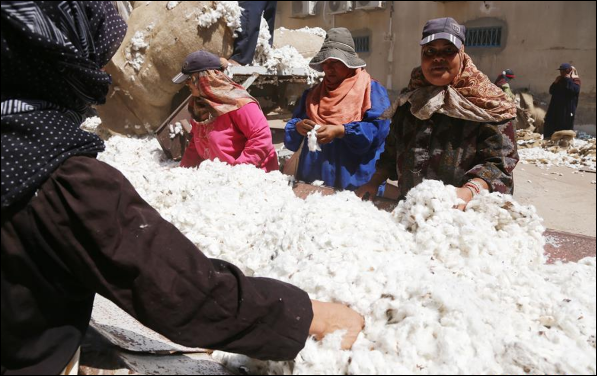 Egypt is expected to export around 65 million kg of long-staple cotton worth 150 million U.S. dollars in the 2018-2019 season, Nabil al-Santaricy, chairman of Egypt's Alexandria Cotton Association (ALCOTEXA), told Xinhua in a recent interview.

He predicted that the plant area would expand to between 168,000 to 189,000 hectares next season, despite a warning that Egypt will find it difficult to effectively market the increased output of its long-staple cotton.

The Indian market, the major traditional market for Egyptian cotton, accounts for 50 percent of its cotton exports, al-Santaricy said.

Egyptian cotton is an extraordinary commodity that has played an important role in Egypt's economic, social, and political history during the past two centuries.

Egypt's unique climate and fertile soil are ideal for cotton cultivation. From the early 1800s to the present, Egyptian cotton has always been synonymous with luxury and quality.

After the popular revolution in January 2011, the cotton industry in Egypt witnessed a recession because of government negligence, which degraded the quality of the most famous crop in the North African country.

However, the government has set plans to restore the key sector by doubling the production of high-quality cotton after years of suffering.

He said only four countries produce excellent long-staple cotton, namely the United States, Egypt, India and China. China and India use their produce domestically, while American and Egyptian cotton go into global trade.

According to the Egyptian official, Egypt's share of the global cotton market in the 1970s was between 70 and 80 percent, compared with 20 to 30 percent for the United States.

However, "the situation is now the opposite," he said.

Al-Santaricy called for expanding the cultivation of short-staple cotton from Egyptian breeds to meet the needs of the Egyptian market.

"The 30 state-owned textile factories are currently in the process of developing. They stopped using long-staple cotton and rely on imported short-staple cotton because their machines do not produce thin yarns but thick and medium threads," he explained.

"Egyptian cotton is undoubtedly the best in the world, as confirmed in a report released in April by the Bremen Exchange on the world's premium long-staple cotton," al-Santaricy stressed.

Meanwhile, the official pointed to the obstacles the spinning industry in Egypt has gone through, saying the government is developing factories of the public sector.

"It is necessary to develop public factories to produce fine yarns to be an added value for Egyptian cotton. Instead of exporting a kg of cotton for 50 (2.8 U.S. dollars) or 60 Egyptian pounds, we can export one kg yarn of 300 pounds. This will definitely revive the industry and increase income," al-Santaricy said.

Egypt has been suffering an economic recession because of political instability and relevant security challenges following two uprisings that toppled two heads of state since 2011.

The turmoil led to a decline in the country's foreign currency reserves, foreign investments and tourism revenues.

In addition to floating its local currency to deal with dollar shortage, Egypt started in 2016 a strict three-year economic reform program, including austerity measures, fuel subsidy cuts and tax increase.