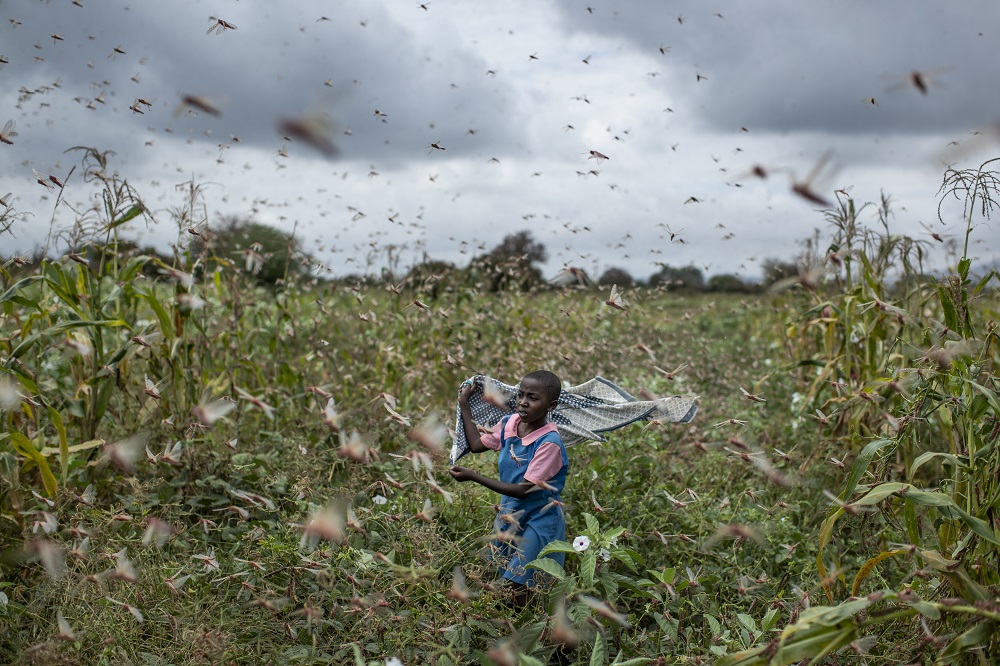 A girl tries to drive away locusts from her family's farm in Katitika village, Kitui county, Kenya on Jan 24. (Photo: AP)

With East Africa yet to contain the locust invasion that has hit the region hard, leaving a trail of pasture and crop destruction, the international community continues to extend the needed help.

The United Nations World Food Program welcomed the contributions, which will be used for food distribution, nutrition support and enhancing the resilience of small-scale farmers against natural disasters.

“We are very grateful for the generous support by the government of Japan to respond swiftly to the crisis. It is vital to provide support to the most vulnerable in the region who have been already hit by climate shocks and conflict,” said Naoe Yakiya, director of WPF Japan Office.

The support comes days after the African Development Bank approved a $1.5 million emergency relief grant to assist nine countries in the region to control of the swarms.

The funds will be used to control the spread of the current locust invasion, prevent potential next-generation swarms and to conduct impact assessment and monitoring to enhance preparedness and awareness. A portion of the funds also would be allocated to administrative costs.

Earlier on, the government of Sweden pledged $4 million to combat the swarms. Focusing on Ethiopia and Somalia, the contribution to the Food and Agriculture Organization's desert locust response will help the UN agency support locust control activities and coordination with other countries, as well as provide livelihood support to people who have been affected.

The desert locust is considered the most dangerous migratory pest in the world. The current upsurge, which started in 2019, is the worst in 25 years in Ethiopia and Somalia, and the worst in 70 years in Kenya.

A wave of desert locusts in East Africa is forming new swarms in parts of Kenya, Ethiopia and Somalia, putting at risk the main harvest in May and June, and threatening people's food security.

More than 13 million people across East Africa already suffer from severe food insecurity. A lot of locust-affected communities in the region have been hit by conflict.

In Ethiopia, the locusts have devastated more than 30,000 hectares of crops, including coffee and tea, which account for about 30 percent of the nation's exports.

Despite government intervention, swarms and breeding have been reported in large parts of the country. In Djibouti, over 80 percent of 1,700 agro-pastoral farms located in 23 production zones are affected by desert locust infestations, according to the African Development Bank.

At least 18 of 47 Kenyan counties are affected, with more than 70,000 hectares of crops under infestation according to recent FAO reports. Locust swarms are devastating pastureland, maize, cowpeas, beans and other crops despite the government's efforts to curb the outbreak.

The COVID-19 pandemic is now adding to the suffering of particularly the poorest and most vulnerable in East Africa.