WORLD Investigators back on scene of deadly Pennsylvania car blast

Investigators back on scene of deadly Pennsylvania car blast

Authorities said Monday that the three people who died in a car explosion in downtown Allentown, including a father and his toddler son, all knew each other, but the cause of the explosion remained under investigation.

The Lehigh County coroner identified the three dead as Jacob Schmoyer, 26, and his 2-year-old son Jonathan Schmoyer, as well as David Hillman, 66— who was a friend of the older Schmoyer, authorities said. Don Robinson, special agent in charge with the federal Bureau of Alcohol, Tobacco, Firearms and Explosives, declined to talk about a possible motive or a cause of the explosion. 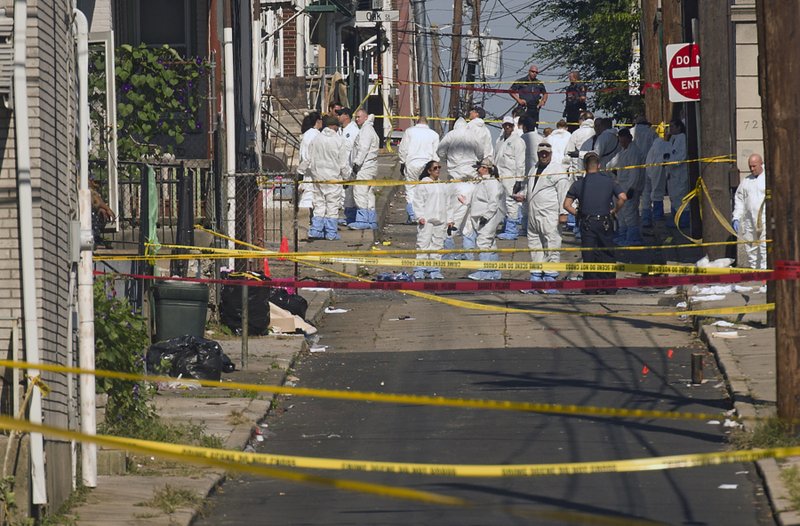 "Obviously we are dealing with an explosion — that could be anything from an accident to a device, an explosive device," Robinson said Monday.

But on Sunday, District Attorney James Martin told reporters at a news conference that he believed there had been a crime.

"We know there's been a criminal incident," District Attorney James Martin told reporters at a news conference Sunday. "We have a high degree of confidence that the perpetrator was probably killed in the incident."

Martin did not speak at the press conference Monday, and it was unclear whether ATF investigators believed either man had purposely caused the explosion.

Investigators returned to the area of the explosion early Monday with about 30 of them combing the scene, most of them from the ATF. Some wore hazmat suits.

The three were found dead after the 9:30 p.m. Saturday blast, according to Lehigh County Coroner Scott Grim. He said the three died from traumatic injuries related to the explosion.

Officials said the blast was believed to have been an isolated incident with no ongoing threat to the public.

Authorities released no information about the possible cause of the blast, including whether it was a bomb, but Martin said "loads of us in law enforcement" are confident "this was A. an isolated incident and B. there's no continuing threat."

Authorities are seeking the public's help and asked anyone with information to call the ATF.

Resident Carlos Perodin told The Morning Call of Allentown that he was watching a movie with his wife when he heard a thunderous explosion and went to the scene.

"The fire was crazy," he said. "The car was pretty much split in half."

Stephanie Connelly, who saw the aftermath of the explosion, told The Morning Call that she saw body parts strewn across the street.

A bus station was turned into a makeshift command center with armored vehicles, dozens of police cruisers, mobile command units and even portable bathrooms, the paper reported. Several portable tents were also erected for evidence processing.

Residents were asked to avoid the area, and people who live nearby were asked to shelter in place. A shelter was set up at an elementary school.